The line right after "the walrus was Paul" is denoted by many different websites as saying:

John can't possibly be singing that, can he?  If he is, what does it mean?  Just a bit of his "Spaniard in the Works" Dadaist nonsense perhaps...?

Someone told me that a Glass Onion is a coffin??? Anyone know what it is or isn't?

A Glass Onion was a large hand blown glass bottle used on sailing ships for wine or brandy. So they were more stable they had wide bottoms, giving them an appearance reminiscent of an onion. Though I doubt John was thinking of the bottle when he used the phrase.

I gotta say, it's one of my least favourite Beatles tunes.

LongHairedLady said
I gotta say, it's one of my least favourite Beatles tunes.

I just posted another topic on one of the things I like about it!  It's certainly not in my top 10 or even 20, but I do like the melody, John's style of singing, and the self-referential lyrics.  It's probably the Beatles song that is the most intensely and directly about the Beatles songs themselves.

I remember it being a glass monocle, guess I am wrong then.

I presume thats the demo @rarehare as there is also a studio recording on 'Anthology 3 ' as well. Never noticed that before, will have to check it out. Thanks.

Welcome to the forum, nice to have you joining us. Hopefully you will stick around and join in the topics and conversations.

LongHairedLady said
I gotta say, it's one of my least favourite Beatles tunes.

Heh...It's one of my favorite Beatles tunes

Well, top 25 probably, it's really hard to rank them past 50th best or so.  Maybe because I remember it from childhood.

I remember it being a glass monocle, guess I am wrong then.

I see several sites that say "Glass Onion " was British slang for a monocle. Have any of our Brits heard that before?

It does go with the words "looking through" that come before it. 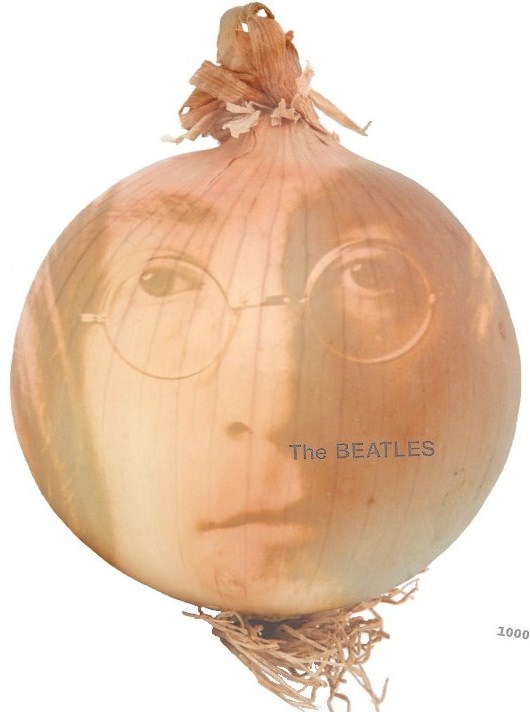 This discussion just jogged a memory loose in my brain. Years ago, my cousin took me to a cafe in Memphis called the Glass Onion . Of couse, back then I was oblivious to the reference to The Beatles. I'm not sure if the cafe is still open. Here's a website that mentions it http://memphis.diningchannel.c.....-onion.htm

Also, in the gift shop of the Rock 'n' Soul Museum in Memphis I saw some cds by a group called Fried Glass Onions (where Memphis meets The Beatles). Yep, so much food in the American South is fried.

They perform Lady Madonna in this segment (I haven't watched it all the way through.)

This is what I and Wikipedia thought but according to Lewisohn it's after St Michaels church, which is partly built of cast iron. Additionally the links Wikipedia rely on no longer exist and the site nowhere mentions an iron foundry.

I like the bass sound, a feature of the White Album , and Lennon's singing. There's a lot of fun musical bits and pieces in it, the ironic recorders after mention of The Fool On The Hill for instance.

This is what I and Wikipedia thought but according to Lewisohn it's after St Michaels church, which is partly built of cast iron. Additionally the links Wikipedia rely on no longer exist and the site nowhere mentions an iron foundry.

I'd be interested in the Lewisohn quote if you have it, but have to say that I respectfully disagree with whatever logic he has used to come up with it.

The Cast Iron Shore (also known as, and maybe now more commonly referred to as, The Cazzy) is a nickname given to the Mersey shoreline between Dingle and Otterspool in south Liverpool. It gained the nickname in the 19th Century when the shoreline was stained red as a result of ferric oxide from The Mersey Foundry which occupied a huge site near Grafton Street in Dingle.

St. Michael's, built using cast iron from The Mersey Foundry, does indeed have a "Cast Iron" nickname, but it is - rather logically - the Cast Iron Church.

Our Liverpool friend, @Oyster Black Pearl,  who's very good on local knowledge, might be able to say more on the history of the area.

Everything above seems to be correct, although there is a lot of conjecture as to the definitive source for the 'slang' naming of this particular stretch of the south Mersey shoreline. What is not in doubt is the location - it stretches from the foot of the Dingle to Otterspool promenade. Otterspool was laid-out in the 1930's, using waste (garbage), and the resulting earth from the excavation of the first Mersey Tunnel. Or so I've read. So, here goes.

As above, there was a an iron foundry, from which it is believed St. Michael's church (located just inland at St. Michael's - in the - Hamlet) was constructed. Now this is where it gets interesting. Just this week someone on a local history page on Facebook posted a newspaper clipping from 1908, in which an elderly chap wrote a letter in reply to an enquiry about the origins of the Cast Iron Shore. He recalls playing as a child in and around the area of St. Michael's church, and the fields that ran down to the shoreline. This would have been around the 1860's? He relates that over time, the phrase 'Cast Iron Church'  became 'Cast Iron Shore'. I'll have a dig around and see if I can find the clipping.

Another theory is that in this area, old ships were 'broken-up', or 'scrapped', leading to the sight of huge chunks of metallic shipping being prominent on the shoreline. There may be truth in this, but this has largely been dismissed by a large number of local history experts.

Personally, I always thought the Cast Iron Shore referred to an area south of the Dingle, where there are huge metal doors on the front of tunnels built into the side of the 'cliff face' by the old Dingle Station. I'll try and find a photo, once you see it, you'll see what I mean. But that's possibly only my interpretation.

The following people thank Oyster Black Pearl for this post:

Photos and any other information would be great @Oyster Black Pearl. Thanks for what you have posted so far.

There is a novel titled The Cast Iron Shore

Leading a vacuous life in Liverpool with her Jewish family, Sybil Ross is 14 years old when she overhears a forbidding family secret. Reacting, she sets off for America, where she joins the Communist Party and ends up being pursued by the forces of McCarthyism until she reaches California.

And there's this reference in the novel My Family and Other Scousers: A Liverpool Boy's Summer of Adventure in '69

...dirty rag of a handkerchief out of his pocket. He blew hard and his catarrh sounded as thick as the oil slick on the Cast Iron Shore.

Yes, pictures would be fantastic!

Sir, -- In your leading article today on “Place Names” you ask—“Why ‘Cast-iron shore?” My playmates and I, some fifty years ago, used to walk out to the shore in question, passing on our way the Church of “St. Michael in the Hamlet.” On the first occasion we were told that the church was built of cast iron, and we spoke of it thence-forward as the “Cast-iron Church”—a shorter and more easily remembered name—and of our destination as the “Shore by the Cast-iron Church.” This we soon shortened to the “Cast-iron Shore,” and the name was a familiar one to us and our friends for many years after. If it was in use by other people earlier than about fifty years ago, it probably originated in the same simple way. I understand, but am not sure, that the church was, in fact, partly built of cast iron.—Yours, &c, C. H. S.

EDIT: there's another clipping on that page.

Sir,- The writer of the letter re the “cast iron shore” may be pleased to hear a little more of its earlier history than he appears to be acquainted with.

The Church of St. Michael-in-the-Hamlet was built exactly one hundred years ago (this being, in fact, its centenary) by a man named John Cragg, and the church is, with the exception of the walls, roof, and the existing floor and the woodwork of the pews, entirely constructed of cast iron, as were the half-dozen or so of dwelling-houses which then formed “The Hamlet” and in which the results of his handiwork are still visible. This was at that period a delightfully retire spot.

Mr. Cragg was called Cast-iron Cragg, and no doubt the shore received its name at that period. – Yours, & c., T. W.