Beatles books you own

Eight Days A Week (Pictures of the last tour)

In His Own Write by John Lennon

The Beatles Comic Book (its amazing!!!!)

John Lennon (another book of pictures).

It seems small now compared to everyone else's! Looks like I gotta get mpre.

I have to say I loved In His Own Write and John Lennon : The Life by Phillip Norman was amazing. I thought it was very well-written and gave me quite some insight on John.

I'm looking forward to buy some The Beatles books,unfortunately there's no book about Fab Four in my country /Lithuania/

Hi kadikas - welcome to the forum. I think you could be our first Lithuanian!

I have one new book in my collection: Way Beyond Compare by John C Winn, which came before That Magic Feeling. Both are good reference books but probably only for the hardcore fan. 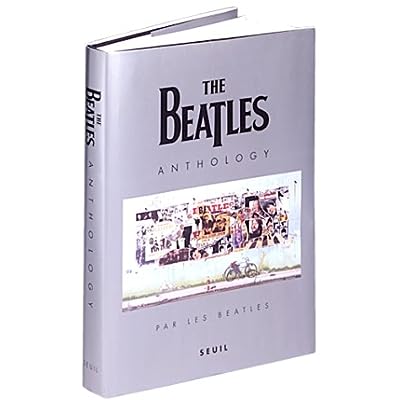 The Love You Make – Peter Brown

A Photographic History Of The Beatles – (Can't Remember)

Many years From Now – Barry Miles*

Here, There And Everywhere – Geoff Emerick*

*indicates I don't own the book. Nothing Is Real
Nowhere Land
The Jacaranda
Guests
Forum Posts: 26
Member Since:
3 January 2011

Living is easy with eyes closed misunderstanding all you see I'm really surprised by how many Beatles books you all have (read) !

Anthology (actually, my father got it as a present when it came out)

In His Own Write (stole it from my school)

I feel like a really bad Beatles fan now

Dont feel bad. I just got Anthology and Chronicle recently.

I only have the giant Anthology book personally, but I've read a couple others.

I hate how big Anthology is. It seems so indimitating. But I love the book. And I'm only on 1963!

I bought that "Beatles vs. The Rolling Stones" thing (that Joe reviewed elsewhere) by Jim DeRogatis and Greg Kot over the Christmas holidays. It's pretty good, but a bit disappointing in a couple of ways. First, for some reason (and this is entirely my own fault, obv) I confused DeRogatis with Richie Unterberger, an older writer for whom I have more respect. And second, more importantly, I assumed that since there were two writers, one of them would be championing the Beatles, and the other the Stones, and that they'd fight it out. (Fun!) Instead, their ultimate conclusion - which they state in the preface, before the book proper even begins - is that both bands are great in their own way, so deciding "best" and "worst" is pointless, since musically they're equal. And that the Stones were, for what it's worth, "cooler" than the Beatles. (Surly, rebellious ugly dudes vs. handsome grinning moptops in suits, etc.) An opinion I probably agree with much of the time. (As if "coolness" has any bearing on musical greatness whatsoever.)

But once it's established that their shared (non-)answer to the question "Beatles or Stones?" is "Both!", they begin to move to the minute details and individual comparisons, and on these they don't always share opinions, so that's good.

Joe, a question. Is All You Need Is Ears any good?

It's OK, I've not read it cover to cover, just dipped into it. It was written before The Complete Beatles Recording Sessions came out, so although the anecdotes are true, some of the details (such as which song they referred to) aren't.

It's not just about The Beatles either - it's a general autobiography written (I think) in the early 80s. George Martin wrote another book, Summer Of Love, about the making of Sgt Pepper , though I haven't read that one.

The 1992 documentary "The Making Of Sgt. Pepper " has a lot of his interviews regarding Pepper, Along with Anthology era interviews with the Threetles.