Yes, and maybe I’ll make the list for once! Darn you, meanmistermustard!

Well, I guess it’s not your fault but rather everyone on the list! I’m trying to catch up, for god’s sake!

Well moan at them, i’ve been here for God knows how long.

Seriously? Has anyone dreamt of me?

It was the evening of the third day that I had been in a European city. I don’t recall which one it was. I bumped into @Expert Textpert. He had just arrived in the city. We decided to pal around the next day. I had already seen the “must see” sights in the city, but I told him I would be quite content to go back to them with him so he could see the major sites.

Next, we headed to another city. We were in a huge, crowded shopping/bazaar area. We got separated. As I was looking for him, he called me on my phone. He had looked around for me for a while, and when he couldn’t find me, he headed to the hotel where we had reserved our rooms. He started telling me that on the way to the hotel he had stopped into a little chapel. He was starting to tell me about the fascinating conversation he had had with the priest in the chapel. I interrupted him to remind him that the phone call was very expensive because we were using our international calling plan miutes and that he could tell me all about the conversation in person at the hotel.

I woke up before I found out what his conversation with the priest was about, but I had assumed it would be about Elvis and spirituality.

@Ahhh Girl What an interesting assumption!

I had a dream a few nights ago, interesting but don’t remember much now. Only that there was a girl wearing a certain (unnamed, this is no 50 shades thread!) article of clothing that had the Revolver cover art on it!

Do I love that album that much?

Dreams? Only the two I’ve posted… And the dream wasn’t 50 Shades-like just that random part.

The other night I had a horrible nightmare. I was in a dog pound where several dogs were about to be put down. Most of you know I love animals almost more than life itself. As the first one was being dragged into the room where it was to be done, I could not move to stop it. I kept yelling and screaming for it to stop. I woke up screaming MURDERERS!! MURDERERS!! It was the worst dream I can remember. Brutal.

I had to give my consent for one of our cats to be put down (it was either that or let it live in incredible pain which would have been incredibly cruel and unfair, if anything we kept it alive for too long, another thing i regret) and i still feel horrible and very guilty about it 15 years later. One of the most horrendous, heartbreaking things i have ever had to do.

I had a dream two nights ago that I was flirting with this really cute girl someplace, and while looking at some pictures of Pattie (I was looking for something AG put up) I found this. 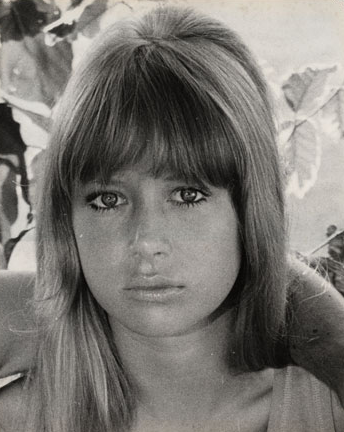 The girl probably looked exactly like that, although I didn’t think she looked like Pattie, and her hair was entirely blonde.

So I had this dream last night about the girl which I have mentioned in the In My Life thread. She was in my house and she hugged me. I was going to show her my guitar and it was gone. There was a knock at the door and it was none other than the Beatles. George had found my guitar and they wanted to jam with me. So we did. I don’t remember the rest other than the girl was with me the whole time. One of the best dreams ever.

^ Do you happen to recall what era Beatles jammed with you?

I had a dream within a dream last night. I think I’ve had only one other dream like that in my lifetime. Very Inceptiony.

Like a week ago I had a crazy dream.

I had long hair to my shoulders, I have short hair. My religion teacher took me and threw me into her car, then she drove up a mountain where she dyed my hair with an almost golden yellow color. I ran away to tell the principal about it, she chased me with her car. I got to the prinicpal’s office to tell her about the incident. Then, my mother appeared and said it was okay if my teacher dyed my hair. I accepted it, still kinda regretting it, but I did. I was heading to my teacher’s car, but now she wasn’t driving. She was sitting in the passenger seat, a man was driving and there was another man sitting behind my teacher. They left without me making peace signs.

(I need to get some rest)

Why do you even bother in reading? There's nothing strange going on around here... Or is it?

A few days ago i had dream that a boy was playing a beautiful melody on acoustic guitar, darn i could compose an amazing song (just like yesterday) if i had guitar.

I still remember the melody,it was a bit higher than Yesterday and slower than Patience (Guns N Roses)

I can’t believe there is a thread on dreams here.  Is there a thread on absolutely everything in this site?

The reason that it seems remarkable to me is that a very vivid dream is the reason I am here.  My dream occurred about two months ago, but it is as real to me now as if it were a real memory. I was in a terminal of some kind, probably a train station, maybe even the d’Orsay in Paris, since I have a vague recollection of that huge transparent clock in the background.  A girl was standing at the furthest point of the terminal and I was walking toward her.  I don’t know for sure who she was.  She had short blond hair and a sprinkling of freckles across the bridge of her nose–the good kind.  She was wearing a plain beige dress, but she looked good.  She had a completely enigmatic expression as I continue to approach her; I could not tell her reaction to me at all.  I finally stopped right in front of her and she tilted her face up and closed her eyes–a pretty clear signal.  That’s when I woke up.  But when I awakened, the song Girl was bouncing around in my head.  I can’t say that I ever really paid that much attention to that song before, other than to admire the haunting melody. I can’t say it was really one of my favorites, but it is now.

That dream started me on an Internet Beatles binge, and ended with my registration in this site. How about that, Ahhh Girl?