I just came across this site, while trying to find some unreleased Pink Floyd material.

And what do you think?

Edit by Ahhh Girl 27 May 2015: To discuss this movie, please see the Two Of Us film thread. Thanks.

Had to check up what “toot” means

But I don't get it. Is this supposed to be fiction or what? (not downloading anything)

The “Two of Us,” a fictionalized story of McCartney's visit to Lennon in '76 was pretty good, if memory serves.

I don't recall a '74 get-together. (Though '74 was when Lennon played with Elton John at Madison Square Garden I think)

Paul met up with John in 1974 when John was in the 'lost weekend' period of life staying in LA (wiki dates it as 28 March). John would open his house, i think on Sunday nights, for musicians to come by and jam. Ringo turned up the next day, the story goes, and when he asked who had been playing the drums was told Paul.

I havent seen the film and have little desire. Most of these films are filled with errors, terrible acting and artist license (ie mistruths). And the bootleg is nothing to get excited about. The sound quality is poor, John and Paul are stoned, and the musicianship is not very high either.

Wiki has an entry on this with some background info.

The last known released pic of John and Paul together. 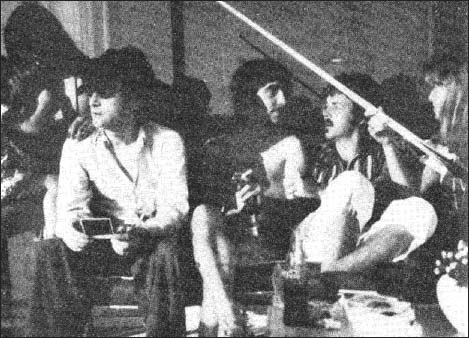 An further addition to this is that, again as a story goes, John was going to meet up with Paul in early 1975 in Nashville to record together but he went back to Yoko, I think it was the night before he was due to head over to Nashville with May Pang.

I believe it was New Orleans – John was to join Paul on Venus And Mars – this was actually going to happen – until John spoke or visited Yoko (he was still with May Pang living in NYC). John I believe went and visited Yoko came to the apt he shared with May and the trip to work with Paul was over. Poof. You fill in the blanks.

This is out of wikipedeia so make of it what you will: John Lennon, often in a nostalgic mood while in Los Angeles, had told May Pang (his then girlfriend) that he planned to visit the McCartneys during the recording sessions for Venus And Mars , but this was not to be. Lennon's planned visit would be permanently postponed due to his reunion with Yoko Ono.[4]

My geography is rubbish. Sorry.

To discuss this movie, please see the Two Of Us film thread. Thanks.