You may be interested in reading some of my book reviews about the Beatles. I also have a thread about baseball.

You’ll have to scroll around to read them.

The following people thank Patrick Hubbell for this post:

Hi Patrick. I made you a thread. The thread you posted in is for a long-time member.

Please update us when you add more Beatles book reviews to your blog.

Welcome to the Fab Forum.

I hope you will get involved in another conversations on the Forum.

BOOK REVIEW: Tell Me Why by Tim Riley

SOMETHING TO Think For Yourself

In Tell Me Why , Tim Riley exudes expertise in music theory as well as a talent for language as he explores every song recorded and released by the Beatles. One paragraph about George Harrison ’s songwriting debut captures the essence of the writer’s facility for the subject:

“’Don’t Bother Me’ has a variety of texture; good use is made of the stop-time breaks before each verse; and there is a brooding, almost malevolent quality in the singing that suits the lyric (the modal harmonic design sets dorian verses off an aeolian bridge ).” Mind, this is a random pick of hundreds of other paragraphs with marvelous descriptions.

I don’t agree with all his assessments – he all but hates the Magical Mystery Tour and Yellow Submarine albums. He considers Sgt. Pepper a “flawed masterpiece,” yet spends page after page caressing bar after bar of the songs.

“Ripe with pain” is an understatement. Pain is the most probable reaction to anything recorded with Yoko Oh-No’s shrieking voice. In a better world, or at least with a reviewer with better sense, this tripe would be laughed to scorn. I don’t blame her for breaking up the Beatles, but I do blame Lennon for letting her near a live microphone.

My advice to would-be readers is to stick with the group’s output, shrug at his criticisms of most of George Harrison ’s work, and ignore the rest. – June 6, 2018

This Bird Has Flown Nowhere, Man

This Bird Has Flown: The Enduring Beauty of Rubber Soul – John Kruth

I’ve read at about a dozen books by and about the Beatles, three of them this year. What I had hoped to read when I checked out “This Bird Has Flown: The Enduring Beauty of Rubber Soul ” by John Kruth was something about the songs, what inspired them and how they came to fruition. What I got instead was a sordid blow-by-blow account of how many and much drugs were ingested, and how many groupies/affairs were carried on. Okay, we’re not dealing with choir boys – well, one actually was – but if I really wanted to know all this, I’d subscribe to National Enquirer.

That said, this book does contain some background stories, but you have to wade through a lot of mud to find them. There are also some laughable parts. The writer NEVER could get the name of the Monkees right (Monkeys. Really? Monkeys?)

Skip this. If you really want some interesting and credible information, check out “Can’t Buy Me Love” by Jonathan Gould, “Many Years from Now” by Barry Miles, or “A Hard Day’s Write: The Stories Behind Every Song ” by Steve Turner. – June 21, 2017 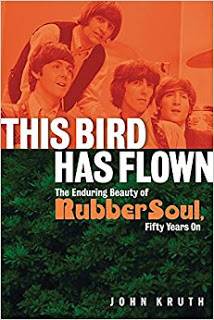 RINGO: A LITTLE HELP FROM MY FRIENDS– MICHAEL SETH STARR

Of the Four Lads, Ringo always seemed to take a drumming in recognition, so to speak. Critics gave him the short end of the drumstick. Sure, he was in the world’s greatest rock band, but how many books have been written about him? Well, at least now one. Ringo: A Little Help From my Friends by Michael Seth Starr is an unauthorized book by a writer with the most improbably coincidental surname.

Well, at least one book has. This unauthorized book by a writer with the most improbably coincidental surname does not reveal much new material. Indeed, I’m up to here with all the sordid details of the behind-the-scenes.

What I really wanted to learn is how Ringo came about his drumming style. What were his influences? Did he influence others? For the answer to those questions, you’d be better off turning to the back of the book for the views of four modern rock drummers. All pay homage to this musician that has lately taken an unfair, uh, drumming.

In the past, luminaries such as Buddy Rich paid little heed, when they paid any at all. Ringo was a second-rate drummer who couldn’t even do a “mom and pop” drum roll. As it turns out, he was a left-handed drummer playing on right-handed drum setup. Huh, what? How is that? Paul was left-handed, but he acquired a left-handed bass guitar. Can’t you move your drums around to suit your preference?

However the drums were set up, Ringo developed a distinctive style. First and foremost, he kept the beat. You have one job as a drummer, and that’s to be the noisy timekeeper. Everything else is called “drum fills.” Ringo was first-rate in what counted the most, and filled the songs admirably as well, particularly in “Rain ,” “I Feel Fine ” and his signature “A Little Help from My Friends.”


The Beatles were more than the sum of their parts. Ringo was good enough to be sought after by groups all over England. He was more well-known that the Beatles were when he was invited to join them. Paul McCartney himself said that when Ringo sat in for the moody Pete Best, “That was the moment, that was the beginning, really, of the Beatles.”

In order to truly appreciate Ringo, watch the last ten minutes of “A Hard Day’s Night” as he enthusiastically thrashes the cymbals and bobs his head throughout the performance. I have never seen another performer having as much fun as Ringo on stage. – June 6, 2017 A Taste Of Honey

The elements that brought the Beatles “to the toppermost of the poppermost,” as Lennon put it, are on display. Martin took in the Beatles, hoping to replicate the success other producers had with the “beat music” of Elvis and Cliff Richard.

Their music didn’t bowl him over during a begrudged audition. After the boys ran through their playlist, Martin proceeded to tell them everything he didn’t like in his posh London accent. He then invited them to tell him what THEY didn’t like. After a nervous pause, George Harrison finally chimed in, “Well, for one, I don’t like your tie.” The cheekiness broke the ice, and by the time the boys left Abbey Road , Martin set the wheels in motion to replace their sullen, incompetent drummer, and make the Beatles a household name. They returned with Ringo to record their first “long play,” itself a considerable investment. LP’s were customarily reserved for classical records. Martin gambled on their collective charisma and songwriting prowess.

Of course George Martin’s work with the Beatles dominates the book, but he had made his mark with other acts before and after. In fact, comedy records put him on the road to success and eventually in charge of Parlophone Records. Beatles’ manager Brian Epstein brought other acts to his attention, and the British Invasion ensued. 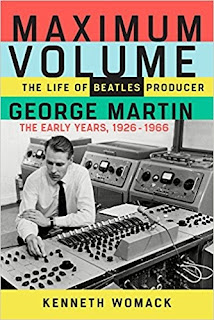 The following people thank Patrick Hubbell for this post:

Michael Starr posted on our forum in this thread: https://www.beatlesbible.com/f…..ael-starr/

Regarding Ringo’s drumming, you probably want to check out a book by another forum member…see this thread: https://www.beatlesbible.com/f…..tles-beat/