Having read the reference to Charles Manson, and having also read or seen various books, films and documents relating to those infamous murders of 1969, I think it should also be pointed out, despite the fact that Charles Manson did use Beatle references to try to justify his crimes, that it is also the belief of a number of commentators that Charles Mansons actions were as probably based on spite, rage and simple jealousy. Charles Manson had hoped to make a name for himself in music with the help of Beach Boy, Dennis Wilson… Dennis Wilson introduced Manson to the son of Doris Day, who at that time lived at the house in Cecilo Drive. But Terry Melcher (Doris Day's son) took no further interest in Manon, and this did enrage Manson. It would be easier to justify a plan of Revolution by quoting Beatles lyrics and Bible references to a bunch of young hippies than exclaiming that you want revenge for the fact that your chance at stardom had been thwarted. Manson sent the Family back to Cecilio Drive for no other reason than revenge. It was unfortunate for Sharon Tate, that she and her friends happend to be at the property on the occasion the family arrived. The LaBianca murders were simply a rouse to throw suspicion away from the family, once Manson realised that he had missed his intended target, and killed someone else instead. That is my opinion, anyway.

Interesting. I haven't read much about Manson and his family (I like sleeping at night and I like Helter Skelter ), but what I have read is usually presented as if he really did believe that The Beatles were sending him messages. This makes more sense. I suppose he would have picked another celebrity(ies) if they weren't around in any case.

On a different note, did you read the article about the man who found out that Manson was his father? How freaky is that?

I'm not disputing the fact that Manson did probably pick up on the Beatles vibe, yet read, or chose to read dark messages within their lyrics. Of course, millions of Beatles fans were looking for meaning within various songs. The Paul is dead thing, for example. But Manson wasn't as crazy as people try to make out. He'd been in and out of prison throughout his life. I suppose tht might have made him bitter towards society. But I think, with the assistance of drugs, that he manipulated a lost group of hippies, and realising his power over them, exploited their gathering to further his own end. I still think the murder of Sharon Tate was really designed as an attack on Terry Melcher. That its roots were that of revenge rather than anything to do with 'Healter skelter coming down.'

No, no I understood you and I think your reasoning is sound. I was just saying if the Beatles weren't around he would have just picked something else. I.e. the Smother's Brothers, Beach Boys ,  Laugh-In, Gilligan's Island, etc. Heck, he could have said that NASA was broadcasting messages from the moon and his followers would have believed him.

On a different note, did you read the article about the man who found out that Manson was his father? How freaky is that?

I read that! Man, how disturbing would that be, to someday realize that your birth father was a mad serial killer. And to top it off, I read he was a huge Beatles fan as well, and knowing how his father interpreted the lyrics kind of prevents him from listening to the songs the same way ever again.

God I know. I feel horrible for him because he seems like such a sweet guy. I hope he finds peace with it. That or they hurry up and come out with that drug that lets you forget certain memories.

If anyone's unfamiliar with the Beatles/Manson connection, here's a feature on it: https://www.beatlesbible.com/f…..es-manson/

I hope I’m the first to use this smiley/growly (apart from Joe when he first added them): Charles Manson =

I’ve just about finished Anthology and one of George’s comments on the matter stood out to me, and that is a man with long hair and a full beard is now more likely to be associated with Manson (in appearance) rather than peace loving hippies. Sadly I think he was right. Looking a pictures of a very serious George with that hair style always seemed a little creepy to me – now I know why. It’s a shame.

Fortunately the hippies normally didn’t go for the swastika tattoo in the middle of the forehead look. I’m not sure I agree with George though.

Well you’ve got a point there. Still, it did help to clarify what was bugging me. It’s all subjective anyway.

Not sure when George said that, but it must have been in the ’70s. I think Manson is farther removed now from the American psyche… sadly, we’ve had a bunch of other psychopathic serial killers and cult leaders to divert us from that maniac and his hippie-related image.

Probably what George was commenting on, however, was what Manson represented in the “straight world” — most people feared hippies because they didn’t trust them. They didn’t buy the whole “peace and love” thing because they thought that hippies were either dirty, drug-crazed freeloaders (which many of them ended up being) or scary, drug-crazed sociopaths (which Manson was).

But I remember hippies as cool people. My dad used to drive us up to the Sunset Strip on weekend nights to “see the hippies.” Most of them grew up, moved to Laurel Canyon, and bought Volvos.

So they grew up and became yuppies? I can’t say I’ve much experience with real hippies, so all of this has been something of an eye opener. The media usually only shows the extremes.

Fortunately the hippies normally didn’t go for the swastika tattoo in the middle of the forehead look. I’m not sure I agree with George though.

I read in Dark Horse : The Secret Life of George Harrison  that George actually admired Hitler because of his power, but obviously didn’t agree with the way he used it. Apparently some of George’s friends had posters of Hitler on their walls and stuff. And of course the swastika was a Hindu symbol originally. It weirded me out when I read it.

But anyway, back to Manson…

Has anyone seen the film Helter Skelter  (about Manson)? I saw a bit of it on TV once but I didn’t realise what it was so changed the channel because it wasn’t about The Beatles which I hoped it would be. Is it any good?

The freak is ill. http://www.dailymail.co.uk/new…..pital.html

Good for him. No sympathy here.

I’ve read a lot about Manson. I believe he may have killed a drifter in the distant past, but as far as the Manson murders, I see him more as an accomplice than a mastermind.

When friend of the family Bobby Beausoleil killed drug dealer, Gary Hinman, messages were scrawled on the walls in blood.

The Manson Family murders were “copy-cat” crimes meant to spring Beausoleil out of jail, but where they went wrong is they killed famous people and because of that the similarities between the murders went unnoticed. The copy-cat murders were the idea of the Manson women.

The idea that Manson controlled them through mental techniques was invented by the prosecutor, Bugliosi.

Have you ever seen Manson? He’s a complete buffoon. Try to imagine him influencing anyone.  The women have said before that Manson simply “acted crazy” when he was around the establishment. I guess eventually the “crazy” just stuck.

Manson as in guitars? 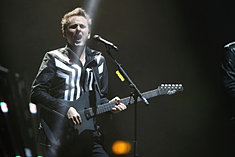