Register
HomeFab ForumYesterday... and todayHow much were The Wiggles influence…

How much were The Wiggles influenced by The Beatles

If you don’t know who The Wiggles are, they’re an Australian pop/rock band who’s music is aimed at children. I used to watch these guys on TV when i was a little kid and growing up i wonder how much were they influenced by The Beatles.

So i thought i’d make a list of similarities that i noticed.

1. If we match the colors on the Sgt. Pepper uniforms to The Wiggles shirts we notice that John matches Greg, Paul matches Anthony, George matches Murray the guitarist, and Ringo’s colors don’t match anyone’s but they’re closest to Jeff’s.

2. Henry The Octopus is an obvious reference to Octopus’s Garden .

3. Captain Feathersword’s outfit is very similar to the Sgt. Pepper uniforms and there is also a subtle reference to Yellow Submarine as he is a pirate who goes on a ship which goes on water.

4. Dorothy The Dinosaur is a possible reference to Happiness Is A Warm Gun , as the line she’s well acquainted with the touch of a velvet hand like a lizard on a window pane, which references that she is a dinosaur, which is similar to a lizard, as well as the fact that she wears gloves and a rose, both of which are often made of velvet.

5. Wags The Dog is a reference to Martha My Dear as they both revolve around dogs and if that isn’t enough, he seems to be closely attached to Captain Feathersword who resembles Paul in every way except the uniform colors, which match George, which is one hell of a coincidence considering that Paul played everything on that song that wasn’t by a session musician except for the guitar which was played by George and they are the only 2 Beatles on that song.

6. All 4 members have been seen using a Hofner bass which is synonymous with The Beatles.

7. There is no real lead vocalist in The Wiggles, just like in The Beatles. 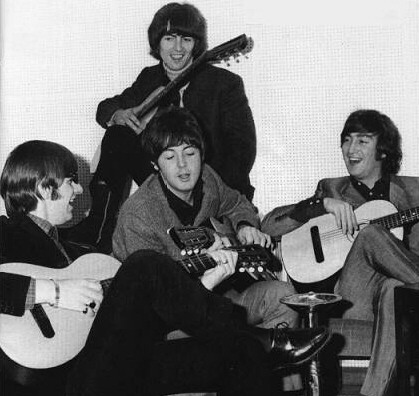 9. Both of them have talked about Christianity, John made a statement claiming that children care more about The Beatles than Jesus where The Wiggles reference god occasionally in their songs.

10. Jeff sleeps a lot, which is a possible reference to how Ringo was often ill as a child.

11. Finally, as with The Beatles, there’s a 5th Wiggle as well, which is Phil, the guy who quit early on.

Anthony was obsessed with the Beatles, in fact, he had proudly stated that the first record he ever bought was She Loves You .

I know waaaay to much about the Wiggles, I used to watch then every day.

That’s cool, especially considering that She Loves You was released the same year Anthony was born in which means that he likely bought it used.

I used to watch the show myself, i stopped at about the same time the classic lineup ended due to Greg’s poor health so when i think of The Wiggles, i think of Greg, Murray, Anthony, and Jeff and not what i call the Australian Democracy Wiggles AKA the new Wiggles, one thing they didn’t take from The Beatles is that sometimes a band needs to die or it’ll go bad.

Anyways, i think all of them like The Beatles and were heavily influenced by them.

As a note, my name for the new incarnation is a reference to Chinese Democracy by Guns N’ Roses and how out of the classic lineup from Appetite For Destruction, only Axl appears.

@TheWigglyBeatle has an avatar of The Wiggles in collarless suits.

Dark Overlord said
1. If we match the colors on the Sgt. Pepper uniforms to The Wiggles shirts we notice that John matches Greg, Paul matches Anthony, George matches Murray the guitarist, and Ringo’s colors don’t match anyone’s but they’re closest to Jeff’s.

The only ones that actually match are Paul and Tony. George’s suit is orange and John’s is green.

And is any reference to a dog/octopus/pirate/dinosaur/God in pop culture an allusion to The Beatles in your head? You do realize that The Beatles did not invent any of those things or make them popular, right?

Like I’m honestly confused.. Do you really think you have sufficient evidence to prove that these were allusions to The Beatles??????

As for anything having to do with a pirate, dinosaur, dog, and or octopus being automatically related to The Beatles, i’ll admit i stretched the truth a little bit there to find more hidden messages. For example, i doubt The Wiggles were thinking about how Paul played everything in Martha My Dear except for guitar which was played by George when they decided that Wags The Dog should be with Captain Feathersword or that they decided to have Jeff sleep a lot because Ringo was regularly ill as a child but it gave more things to point out nonetheless.

I saw this thread and got a bit excited. I know a few ways The Beatles influenced The Wiggles. Starting with the intentional ones:

Now for the coincidences:

I literally spent the past hour comparing The Wiggles to The Beatles. I regret nothing.

All you need is hot potatoes...