Got a favourite bootleg?

I don’t have a download link but here ya go

All songs are available on Youtube if you have an interest in them. Convert them to MP3 files and then put them on whatever the hell you want.

Also the long-gaps in between are meant to be there, it’s George shuffling around with papers and tuning and what not slightly annoying but that’s the way it goes

Anyone looking for Thirty Days (the highlights of the Get Back sessions) can find it being currently upped over at Everything Beatles (generally one disc a day is the time of uploads).

Ultimate Audio Trax. It was the first excellent Beatles bootleg. The remastered sound does wonders. Some of the songs appeared on  Anthology 3 , but you’ve got to listen to the whole album. Real pain in the butt to get, though.

The Black Album (source: Italian wiki) was mentioned earlier in this thread. For anyone looking for a download its over at Anthology of Rock .

On a whim i downloaded a collection i’d never heard of and couldnt find any information for online, Turns out its 19 tracks isolated into separate channels like the Rock Band multi’s are, all moggs. The things out there.

George’s isolated vocal on ‘I Need You ‘ is amazing. I love the song so much but flipping heck, hearing that is something else.

This Paul Des Moines show in 2005 is my absolute favorite bootleg ever. It’s right after Chaos and Creation, which is one of my favorite Paul solo albums, and he doesn’t play those songs live anymore, which is sad. It’s got an incredible setlist, with some rare live stuff like Too Many People , For No One , and She Came In Through The Bathroom Window , along with fantastic versions of live staples, like Let Me Roll It , Sgt. Pepper ‘s (Reprise), and Jet . And the audio sounds professionally recorded, too. Go get it, it’s really fantastic.

Thanks @IveJustSeenAFaceo for the recommendation. I need to start gathering a collection of live shows Paul gave thru the 00’s that feature different set-lists so this fits very nicely.

I wouldn’t say that this is a favorite bootleg, but this is one that I consider essential, purely for the historical value. 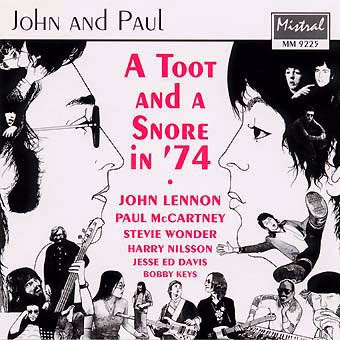 Got this in an email somehow….  I take no responsibility in showing you this, just thought I’d throw it out there.

@Oudis, I thought you might like this thread since you mentioned over in the Strawberry Fields Forever song thread the idea of having a thread to discuss good bootlegs.

Let’s see, the first best favourite was the Christmas message album, and certainly one of the weirdest was the 12″ release of What’s The New Mary Jane ? I missed out on the CD Revolution in bootlegging so most of my stuff has been digital. A collection which now seems impossible to get but had very many stand out tracks was And In The End which sought to collect all the essential tracks in one place, 14 discs worth, and I never got all of it but what I have has many tracks I’ve not found anywhere else. I’ve got various Sessions-type collections which split the tracks, some of which give wonderful results (like the analysis of Revolver Sessions with Tomorrow Never Knows ). But if I were to pick a favourite it would be the John Barrett tapes, because it was such a shock to hear and realize just what had been kept in the vaults, particularly the Glyn Johns Get Back Mix

ewe2 said
I missed out on the CD Revolution in bootlegging so most of my stuff has been digital. A collection which now seems impossible to get

No, I mentioned that I had bootleg LPs, just not any more.

Not sure where to place this.

Rolling Stone feature focusing on their best five tracks from the 1960 home recordings.

No, I mentioned that I had bootleg LPs, just not any more.

Now that I can put all The Beatles music I want on my iTunes/Hard Drive, it was really nice to sell off my bootlegs and CD’s. Can’t believe how much I’ve spent over the years and the stuff just sits there most of the time.

Back on track, hard to pick a favourite, as it never ends.  Even more have come out since the CD and Internet Revolution .

There are many good ones, such as McCartney’s “Cold Cuts” and “Return to Pepperland ” both of which are full albums in pretty good sound of studio-completed songs that were never officially released. Some are meh, some are great such as “Same Time Next Year” from Cuts. There a at least 3 of George’s like this but I forget the titles. I had them once and they were all good. Now, the Beatles themselves: Pretty good is the Glyn John’s final mix of the Get Back album, with gems such as an 8-minute “Dig It ” and others, but the sound is a little foggy. The are many different ones of rareties, alternate versions/mixes, etc. such as on the Anthologies, but these get pretty old pretty quick. My personal favorite(s) are the River Rhine Tapes (on cd) (vol. 1 “River Rhine Tapes”, vol.2 “More River Rhine Tapes” and vol. 3 “Final River Rhine Tapes”). They are culled from the Get Back sessions but have great versions of tunes (such as a hard rock Get Back (also one in German)) and many original songs never released (such as Commonwealth, The River Rhine”, ‘Eddie You Dog” and many others that I can’t think of at the moment). There are an almost infinite number of bootlegs of these Jan. 69 sessions (such as 30 Days, The Black Album, The Elektra Acetates, a reconstruction of Kum Back, etc. etc.), but of the many I’ve heard, this one is my favorite, all 3 volumes (each is only 1 cd but they’re full). The sound is better than on many of the other Jan. 69 albums.

I forgot! Maybe the best. Lennon’s The Dakota Demos. All the songs / song ideas he taped onto cassette from ’75 to ’80. These are not early versions of what ended up on Double Fantasy and Milk And Honey , but rather whole songs that never were released at all (well, the original Free As A Bird and Real Love are on here, as is Life Begins at 40, also on the Lennon Anthology, but there are about 15 others unique to this bootleg). A lot of good tunes, albeit with dodgy sound due to the built-in condenser mike of the cassette machine. I know one, “She’s A Friend of Dorothy’s” that sounds like it could have been on Abbey Road .

When i first started collecting bootlegs I came across a collection called “No. 3 Abbey Road N.W. 8” It was the first place that I heard the studio session between Pul and Donovan where they exchange a few songs, including a wonderful version of Blackbird . The Unicorn is also fantastic. This bootleg included the original Medley order as well, which I had always been eager to hear.

I can’t pick a single bootleg for John, i especially love hearing him flesh out songs on Piano in early 1970s.

My favourite bootleg would be the 5 takes of One After 909 done in 1963 where each Beatle makes a mistake on the first 4 takes. Shows that they’re all human!

These next two have a lot of overlap, but are slightly different: