I like how nobody knows how to address me…

Satan – am I a nobody? I will always refer to you as Satan. We Canadians never let that crap get in the way (Oh, and I fouls bever refer to you as SH – it evokes a more, shall we say, sinister nature, due to the eminent Canadian with those initials). So, Satan, I repeat? Am I a nobody?

Well, Sun King , you do live in Nowhere Land…

Who is the eminent Canadian with the “sinister nature” who has the initials SH?

(Half seriously) That man is Stephen Harper, our current Prime Minister.

For those in who have Sky Arts 1 (channel #129 on Sky) ‘Beatles  In Washington DC’ starts running tonight (Monday 3rd September) at 10pm with numerous rescreenings over the next week or so (and knowing Sky it will be on after then as well). The downside is the running time is 25 minutes when the concert lasted approx. 38 minutes so it aint complete (gggggrrrrhhh).

38 minutes was kinda lengthy for a Beatles concert, wasn’t it? I’ve read that they typically played for 29 minutes or 33 or thereabouts.

It was scrapped at the last minute and replaced with the hack piece “The Beatles: Liverpool to San Francisco”, one of those cheap documentaries which provides little.

Something that lifts my mood… slightly.

BBC Radio 6 are airing The Beatles At The Beeb on Saturday 15th and Sunday 16th September 2012 at 4am but not sure if these are new documentaries or if they are rebroadcasting one of the 1982 shows (Radio 6 has rebroadcast archive bbc beatles and beatle related shows before).  Should still be a good listen.

As it’s being broadcast at 4am, I’d imagine it’s a repeat. They probably wouldn’t bury a brand-new documentary.

There was a two-hour show which was previously broadcast on Radio 2. I presume this is the same, just split into two editions. http://www.bbc.co.uk/programmes/b00mc0c5

Yip thats my thinking too Joe but you never know. Wonder if they will update the quality of some of the performances since they are available in better sound nowadays – a rejig. The other question is what edition is it if its a repeat as wasnt there an initial 2 hour documentary that when repeated had a few more tracks in it they had discovered since?

The Beatles At The Beeb was a reairing of the 1982 documentary tho not sure if it was the first broadcast or the slightly expanded second. Parts 1 and 2 are on iplayer until the early morning of Saturday 22nd September for those with access rights.

Furthermore one of the expanded 3 hour US edits of the show (most of the extra time being adverts but it does have some extra tracks) is up on youtube in three parts (part 1, part 2 & part 3).

The BBC are going Beatle barmy in October with a host of shows to commemorate the 50th anniversary of Love Me Do .

The Beatles’ first top-20 hit, Love Me Do , was released 50 years ago on 5 October 1962, and the BBC is celebrating with a nationwide trawl for listeners’ memories from the time.

All 39 BBC Local Radio stations are holding their own My Beatles Story day (#mybeatlesstory) on 5 October, when every station will broadcast listeners’ memories of the Fab Four.

The BBC has also commissioned a Local Radio survey in which 12,000 people across the UK are being asked to pick their favourite Beatles track. Each station will announce the local results on 5 October.

In their early days, The Beatles toured extensively, visiting towns as far apart as Morecambe and Southend, Croydon and Whitchurch, in addition to the major cities. They were seen by vast crowds as their popularity rocketed, and it is hoped that the My Beatles Story day will jog some great memories from across the nation.

On-air trails are asking audiences not only if they saw any of the early gigs, but also whether they ever saw a fresh-faced young Paul McCartney out and about, or if they might have served John, George or Ringo in a pub or shop, or given them a lift in a taxi. It is hoped everyone’s memories will come flooding back for a golden day of Beatles nostalgia right across the BBC’s Local Radio network.

Stuart Maconie is also presenting an hour-long documentary on BBC Four, which is being made by the BBC in the North West. Love Me Do – 1962 will go out on BBC Four on 4 October, with a shorter version going out on BBC One (North West only) on 1 October.

The programme asks why Liverpool was the birthplace of a musical phenomenon. The city was suffering from severe unemployment, yet it was also the world’s biggest port. Maconie explores how its vibrant pop culture was influenced by the records that arrived from the United States, and chronicles the social history of a proud seaport which helped change pop culture forever.

BBC Radio 2 will also mark the anniversary with a Beatles Season starting on 3 October, which includes a Blaggers Guide To The Beatles with David Quantick and The Casbah Club: Birthplace Of Merseybeat – an exploration of the story of the famous Liverpool club, presented by Pete Best, the original Beatles drummer who was replaced by Ringo Starr .

Other programmes in the season include Year In The Life: Beatles ’62 in which Roger McGough tells the story of the pivotal breakthrough year for the newly mop-topped Liverpool beat combo, and Beatleland, in which Craig Charles heads home to find out what they took with them and what legacy they left behind.

(thanks to Wogblog for heads up)

Flippin’ heck. In 9 days time Love Me Do was released 50 years ago and it might just be about to go beatle crazy again.

A limited edition reissue replica of the original Love Me Do single is to be released on 5th October reports wogblog. 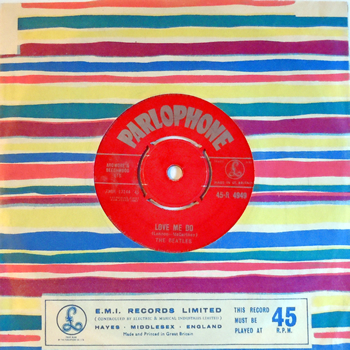 We also have the release of MMT and John’s 72 birthday – all in the space of a few days.

I wonder if they’re going to reissue all the vinyl singles again. This one’s quite low-key, compared to the MMT and vinyl albums announcements.

Wouldnt surprise me, may also get the eps at some point down the line.

An extended hour long version is on BBC 4 the following Sunday (7th October) at 10pm (not the 4th as listed in the link above).

I´ll be watching all of that then. Life is so tough at the moment.

Thanks for the info mmm.

This slipped thru the net.

A Year In The Life: Beatles ’62 narrates the pivotal breakthrough year for the newly mop-topped Liverpool beat combo via the recollections of those who knew and worked alongside them in 1962.

An oral history narrated by Liverpool contemporary Roger McGough, A Year In The Life recounts a familiar tale via the less-familiar recollections of those who were vital to The Beatles development in 1962.

The programme will range from their unsuccessful January 1st audition for Decca records through to the recording and release of their breakthrough hit ‘Love Me Do ‘.

A Year In the Life will also reflect upon their crowning in the Merseybeat newspaper as the leading Liverpool group, their first radio broadcasts at the BBC’s Manchester studios, the death of original bassist Stu Sutcliffe, their return to Hamburg’s Star Club, & the ousting of drummer Pete Best.

Contributors include Bill Harry(the editor of Merseybeat), Klaus Voorman (their close friend from Hamburg & the artist responsible for Revolver ‘s striking sleeve) Pete Best (their original drummer) Joe Brown & Mike Berry (who shared bills with the group shortly before their national fame) Andy White (the studio session drummer who played on ‘Love Me Do & publicist Tony Calder (who promoted their first single).

A couple of other bits and pieces from the bbc.

The Producers: George Martin is on iplayer.

And what sound one of the more interesting amongst all these is ‘The Blagger’s Guide to the Beatles’ which is on bbc radio 2 tommorow (4th October 2012) from 9:30pm – 10pm (and again it will be on the iplayer for those who can access and utilise it). The Radio Times synopsis reads

“David Quantick presents unusual facts about the band, including tales of their first recording session and the working titles of some of their most famous hits. He also explores how the Fab Four’s success influenced everyday life.”

A nice article from the bbc giving an overview of the beatles continung financial strength and worth.