Home
"And Your Bird Can Sing" and Frank Sinatra??? | Fab Forum

Register
HomeFab ForumThe songs"And Your Bird Can Sing" and Frank …

"And Your Bird Can Sing" and Frank Sinatra???

-is this a BS rumor? I feel like the song makes plenty sense if directed at Sinatra (but its certainly not clear) and could even explain the giggle track to a degree.

I can also imagine John not wanting to admit sneaking in a Sinatra-bashing song onto Revolver in his later years when he had calmed down considerably and called the song a “horror” to avoid talking about it.

Either way its one of my favorites (DAT BASS man)

I remember a post like this, talking about ‘Ol Blue Eyes’ bird, nevertheless that Anthology version of And Your Bird Can Sing is epic. Who could play those bass lines while laughing? Then again, it’s Paul.

this might be my favorite song, at least in the last few months.

my interpretation of the song is that john is saying that people have riches and things but are not truly fulfilled or understand life.

“you tell me that you’ve heard every sound there is, And Your Bird Can Sing but you don’t get me…”

“when your bird is broken will it bring you down? you may be awoken. i’ll be round ill be round…”

when your life isn’t satisfying you anymore will you start to truly look for happiness?

The bass playing is fun to listen to, though it seems Paul makes a few mistakes here and there.  I think if Paul had a chance to re-record the song as obsessively as he did with later songs — example the White Album , where just to pick one example, he re-recorded “I Will ” 67 times!!! before he felt he got it right — Paul would have ironed out the kinks and perfected it.

I remember a post like this, talking about ‘Ol Blue Eyes’ bird, nevertheless that Anthology version of And Your Bird Can Sing is epic. Who could play those bass lines while laughing? Then again, it’s Paul.

Well, his bass and vocals (& giggles) wouldn’t have been recorded at the same time, so it’s not certain that even Paul could’ve managed that laughing-while-playing feat!

As for the Sinatra rumour, I really don’t believe it at all; I think it’s just the product of Jonathan Gould’s overactive imagination. If he had a credible source to back this up, he didn’t mention it in his book “Can’t Buy Me Love “. And without that source, we only have John’s word; and the only thing he said about the song was “another horror”. And I don’t buy the argument that he refused to admit the song was about Sinatra because he’d “calmed down considerably”. “Sexy Sadie ” and “How Do You Sleep?” were both character assassinations written while he was very angry with their subjects. And years later, when his anger faded, he downplayed the anger in the songs and claimed that he was partly joking; but he did not deny that the songs were about the Maharishi and Paul McCartney , respectively. So I don’t see why he would be coy and give Sinatra special consideration, rather than just saying “Oh that was just a stupid song, it was for Frank Sinatra – just a joke, really.”

If that Gould interpretation is correct — about Sinatra, and Sinatra’s reference to his privy member as a “bird” — then that line “And your bird can swing” is quite ingenious, for it would be a quadruple-entendre:

4) “swing” as in the swing music of the Big Band era, of which Frank was the king.

I’ve always thought, if about anyone, Mick Jagger (who was going out with Marianne Faithful) was a much more likely suspect.

Those are some nice observations, FP! At least as far as the “…swing” verse is concerned.

As for the rest of the song…let’s just say that if Sinatra indeed possesses a green pecker that is broken and can sing, I DON’T WANNA KNOW ABOUT IT!!

mja6758 said
I’ve always thought, if about anyone, Mick Jagger (who was going out with Marianne Faithful) was a much more likely suspect.

I’ve always thought so too and I’ve read that in a lot of places as well.

^^ Yeah, me too. In fact, I even thought that there wasn’t much, if any, doubt about what (or rather who) it was about.

Me neither. Actually I was a bit surprised to see this topic.

Anyway, I think John wouldn’t have denied it if it really was about Sinatra. I think we would’ve known.

Did John or Paul ever have occasion to meet Frank at all, I wonder?

(In fact, Mick Jagger is singing back up vocals on her song!)

You’re probably right that John wouldn’t have left out that it was about Frank, but I’d really like to know what specifically about it he hated so much?!

I honestly don’t even remember who told me about the Frank Sinatra thing, but for some reason I was thinking about it…

I always thought it was a dig at Bob Dylan… who’s bird was Joan Baez.

I read the Vogue article which allegedly John read and inspired the song. It makes sense because the article mentions The Beatles and mop tops in a way that probably would have irritated John:

Prior to his cold, Sinatra had been very excited about this show; he saw here an opportunity to appeal not only to those nostalgic, but also to communicate his talent to some rock-and-rollers—in a sense, he was battling The Beatles. The press releases being prepared by Mahoney’s agency stressed this, reading: “If you happen to be tired of kid singers wearing mops of hair thick enough to hide a crate of melons…it should be refreshing, to consider the entertainment value of a video special titled Sinatra—A Man and His Music….”

He has everything, he cannot sleep, he gives nice gifts, he is not happy, but he would not trade, even for happiness, what he is….

There is also a reference to Sinatra’s current buzzword… “bird”.

They nodded, nobody mentioning the past hysteria in the Sinatra world when it seemed CBS was zeroing in on the man; they just nodded and two of them laughed about Sinatra’s apparently having gotten the word “bird” on the show—this being a favorite Sinatra word. He often inquires of his cronies, “How’s your bird?”; and when he nearly drowned in Hawaii, he later explained, “Just got a little water on my bird”; and under a large photograph of him holding a whisky bottle, a photo that hangs in the home of an actor friend named Dick Bakalyan, the inscription reads: “Drink, Dickie! It’s good for your bird.” In the song, “Come Fly with Me,” Sinatra sometimes alters the lyrics—“…just say the words and we’ll take our birds down to Acapulco Bay….”

The other thing which is interesting is I checked and the article was published five days before The Beatles began work on Revolver on 1st April 1966 (work started on 6th). So the question is whether John wrote the song once the sessions had begun which is likely and would fit or brought it in complete at the start.

It’s actually a really good article for anyone interested and it’s regarded as one of the best celebrity profiles ever written. 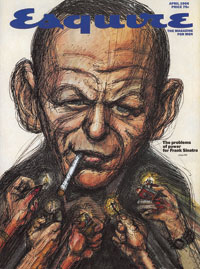 Dunno if I mentioned this in thread, but as skeptical as I remain about Jonathan Gould’s interpretation of “And Your Bird…”, “Can’t Buy Me Love ” itself remains an excellent book.