It was Beatlemania gone mad around Christmas 1964. The Beatles played a residency of seasonal shows at a theatre in West London from Christmas Eve right through the first few weeks of the new year. Paul played his Hofner bass, Ringo thrashed a Ludwig set, George switched between his Rickenbacker 12-string, a Gretsch Country Gent, and a Gretsch Tennessean, and John played his Rickenbacker 325.

Until, that is, John got so caught up in all the excitement that he managed to do some serious damage to his workhorse Rick, dropping it off the Hammersmith Odeon stage. 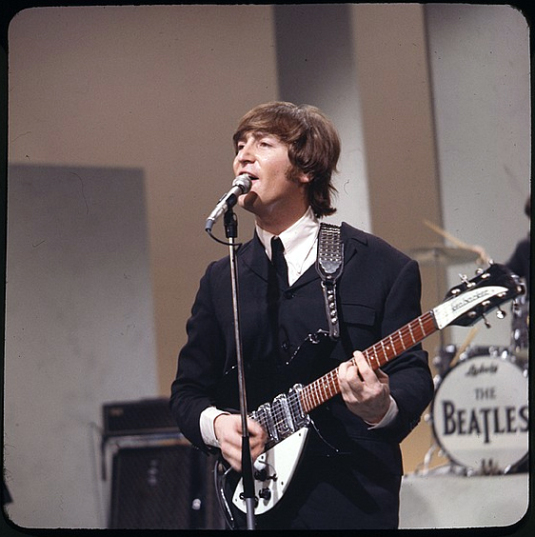 Lennon plays his Rickenbacker 325 on the Ed Sullivan show in 1965.

Startled, John gave the guitar a quick once-over, turning it quickly this way and that. Relieved, he decided it looked alright.

But when he went to play the guitar at the following night’s performance, he found the more he played it, the more it went out of tune. Between songs, he took a closer look, and to his horror he noticed a crack going from the nut around the back of the headstock. Oh dear, he thought. Or words to that effect. What to do? Rose-Morris to the rescue.

John had played a couple Rickenbacker 325 models since the band’s early days, and it had remained more or less the only guitar he used. He told an interviewer at the time that it was “the most beautiful guitar.”

John bought the first one during a working visit to Hamburg, Germany, in 1960. Then, when visiting America in 1964, he got a gift from Rickenbacker, which provided a replacement for that road-weary axe. It was this second 325 that suffered from John’s experiment with an airborne six-string at Hammersmith.

Meanwhile, the British instrument distributor Rose-Morris had taken on the UK agency for Rickenbacker and commissioned six versions of a number of models.

Some were different when compared to the American originals, coming with a traditional f-hole rather than Rickenbacker’s no-soundhole or “slash” hole. And Rose-Morris renamed them based on an arcane numbering system: The “British” version of the Rickenbacker 330-12 became the 1993 in Rose-Morris’s sales material, for example, and the 325 became model 1996, and both had an f-hole in the body.

It’s not difficult to imagine that it was Mal Evans, The Beatles’ trusty roadie and general dogsbody, who was given the job (once again) of sorting out the mess John found himself in. It was probably Mal who had to scoot across to Rose-Morris’s HQ in northwest London and pick up a stand-in Rickenbacker ready for the next day’s performance at Hammersmith, about an hour’s taxi ride each way through the busy holiday traffic. 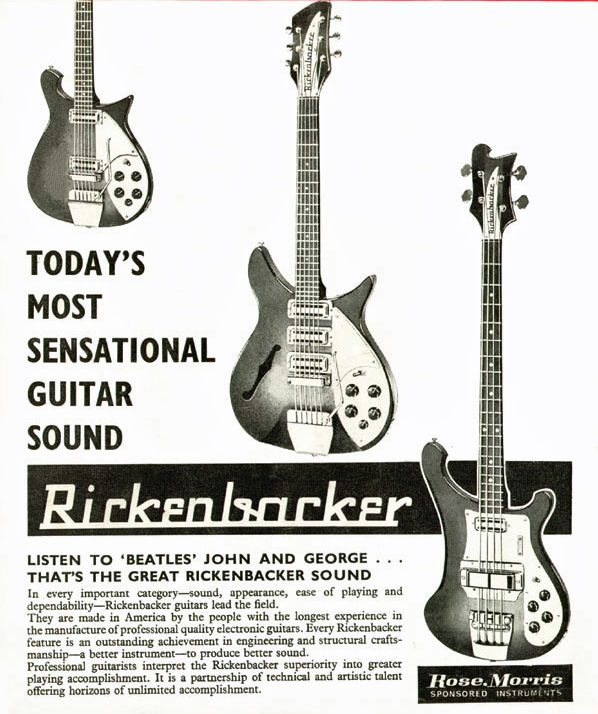 Rose-Morris was happy to provide one of its “British” 1996 versions of the short-scale 325, finished as standard in Rickenbacker’s fireglo red sunburst rather than John’s preferred black. Maybe it was Mal, too, who then had a go at repairing the ailing 325.

John didn’t have to put up with the Rose-Morris model 1996 Rickenbacker for long. He soon had his regular 325 back in a reasonably playable condition, ready for the band’s first sessions of 1965 at Abbey Road .

Rose-Morris, in the meantime, pounced on a great promotional opportunity. The company had already exploited the link between Rickenbacker and The Beatles, underlining the fact that John played a 325 and George often used a 360/12 12-string. One of the Rose-Morris ads said, “Listen to ‘Beatles’ John And George … That’s The Great Rickenbacker Sound.”

After the Hammersmith incident, Rose-Morris’s next move was an obvious one. The firm quickly put together an ad for the musicians’ magazine Beat Instrumental Monthly that made the most of John’s brief encounter with the model 1996. 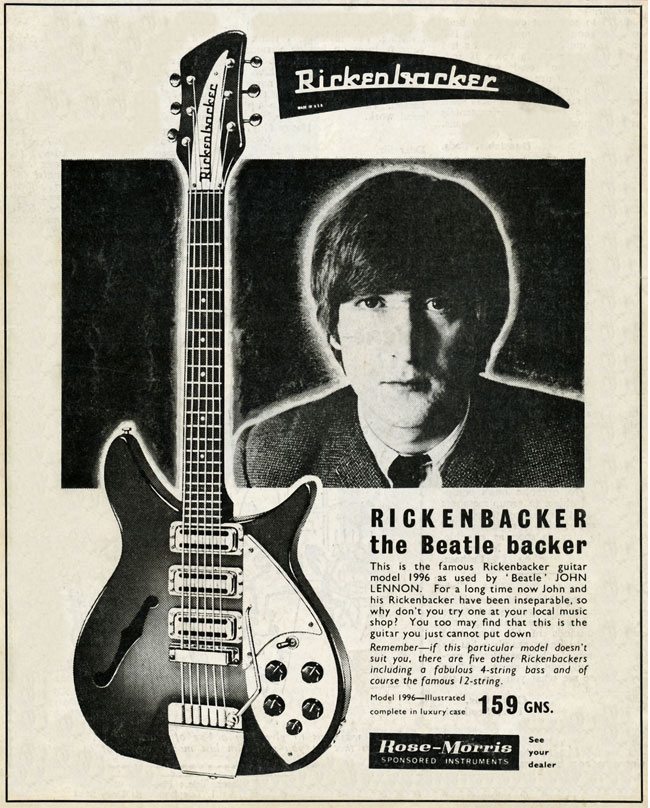 “Rickenbacker The Beatle Backer,” exclaimed the new ad, with a moody portrait of John next to a big picture of the f-holed Rick.

Rather cheekily, Rose-Morris then claimed: “This is the famous Rickenbacker guitar model 1996 as used by Beatle John Lennon . For a long time now, John and his Rickenbacker have been inseparable, so why don’t you try one at your local music shop?”

Well, yes, John did use it—for an hour or two. And he and his Rickenbacker had been inseparable—or at least John and his original Rickenbacker 325s had been.

After the Christmas shows, John took the model 1996 home and shoved it in a corner, out of sight and mind. Eventually he gave it to Ringo, probably around 1968. In recent years, Ringo had a clear out and sold a bunch of stuff at auction, including the Rickenbacker.

If Rose-Morris had ever got around to billing John for the guitar they gave him, it would have had a list price of 159 guineas. Some luxury British goods were priced this way, with a guinea worth one pound and one shilling. That put the Rose-Morris Rick at 166 pounds and 19 shillings, about $465 at the time, and roughly equivalent to some $3,700 in today’s money.

But these kinds of calculations fade into insignificance when it comes to the results of Ringo’s 2015 auction. The ex-John Rickenbacker sold for a cool $910,000. Not bad for a stopgap Christmas gift.

There’s a picture of him from 1967 and it shows the guitar.

Did you link the right pic @Dark Overlord ? I can’t see the Rickenbacker.

It’s directly above his foot that is on the ground, when you see it you’ll never unsee it.

Man, that is so cool. I’m going to print this off and hang it in my room.

It was Beatlemania gone mad around Christmas 1964. The Beatles played a residency of seasonal shows at a theatre in West London from Christmas Eve right through the first few weeks of the new year. Paul played his Hofner bass, Ringo thrashed a Ludwig set, George switched between his Rickenbacker 12-string, a Gretsch Country Gent, and a Gretsch Tennessean, and John played his Rickenbacker 325.

Sad story about John’s original Rick 325: When Julian came to NYC the day after John was murdered, he visited Yoko at the Dakota. While there, Yoko took him to where the various guitars John played were on display, telling Julian that he could pick and keep the guitar for keeps. Julian was no fool. He chose the Rick. After all, John played it on Sullivan, AHDN and at Shea Stadium, 1965. It may be the guitar most associated with John. As the story goes, after Julian made his choice, Yoko reneged on her offer, saying that John had wanted Sean to have that guitar, telling Julian to pick another one. Does this story sound fishy to any of you? The story may or may not be true, even though I got it from 2 different sources. But I find it hard to believe that John designated that guitar go to Sean.

That is Absolutely Fishy

Yoko should of just gave it to Jullian