Hi everyone,
I wondered if anyone knows where the Wings tour bus that the band used for their European tour in 1972 is now? I am going on holiday to Tenerife soon and read that it might be there somewhere. I would love to see it! And am interested to know what has happened to it and who owns it now. What fun the band must have had driving that in 1972!
If anyone knows the whereabouts of the bus I would be really grateful to find out!
Thank you!

Hmm, three years later to the day…and the anniversary of the death of Elvis to boot.

At the time of the above thread OP the bus was indeed in Tenerife, left virtually derelict in a ravine. Things have changed a great deal since then.

Originally in service, based out of Chelmsford, and then from Norwich, this 1953 registered Bristol KSW5G bus (WNO 481) essentially served Essex, Suffolk and Norfolk in the 50s and 60s, as a standard double-decker, initially in green, and then in cream/red. It was converted to an open-top tour bus in 1966 before leaving public service and going to a local dealer in 1971.

It was then painted in a colourful, psychedelic design by artist, Neil Dean (and others), driven to the south of France and then taken on a European tour by Paul McCartney and Wings, in July/August 1972. It was Dean that designed the Wings “W” logo.

The bus was painted in the mustard/gold colour of its subsequent owner, Tricentrol (Luton), who used it as an events/tour bus throughout the rest of the 1970s. The bus went out of service in 1980 but was still owned by the company in 1989, when it was expected to be scrapped. It was saved by Roger White, of White’s Coaches St Albans, who, realising what the bus was, restored it, apparently with the help of Godfrey Davis, St Albans.

The bus was then painted red for a London-Cannes British Film Rally in 1989, and the bus made the trip.

In 1993, the bus, back in its Wings livery, was put up for auction by Sothebys and sold to an undisclosed owner.

It seems that this owner wanted it as an attraction for his rock cafe in Tenerife and the bus was shipped to The Canary Islands and parked in Playa De Torviscas for several years. However this proved problematic for the owner, who moved it onto undeveloped land in a ravine, near their home.

In 2010, Justin James, a trustee of the Children’s Charity, Arms Around The Child, rediscovered the bus and sought ownership. However it was not until December 2017 that Mr James managed to extricate the bus from the ravine and transport it back to England.

That is when Paul McCartney tweeted and asked about it, and this point marks when I started following what was happening.

The bus spent most of the next two years in Oxfordshire, when Mr James finally admitted defeat in his attempts to get the bus going, although it was his opinion that someone else could. He therefore put it up for auction in October 2019 (widely reported around the world), but it failed to sell.

This was when Tom Creaven-Jennings stepped-in and outbid two other interested parties in a private negotiation and obtained the bus for an undisclosed sum.

Mr Jennings has placed the vehicle in the hands of a restorer, David Hoare, who has so far performed a number of repairs and obtained replacement parts, where needed, and the vehicle is now moving under its own power again, for what might be the first time in 20-25 years.

Mr Jennings has big plans for the restoration and future life of WNO 481. Wings/Macca fans, particularly in the UK, may find this of interest.

As I posted in my introductory post, I have blogged about this vehicle a couple of times in the last three years, but the current owner has now set-up a website as well as social media accounts, to keep people up to date about the bus’s restoration and his plans for the future, which you can find at http://www.1972wingstourbus.com/.

Further to the above, members here may be able to help with the timeline for this bus.

The Wings Over Europe Tour Bus apparently made an appearance at Highbury (Arsenal’s old football ground) sometime between 1987 – 1993. I suspect it was later, rather than sooner.

It was for a “London Beatles Fanclub event” (sic).

I was wondering if anyone remembers this, would therefore be able to date it – and better still, have any photos of the occasion?

Additionally, during that same time frame, the bus apparently appeared on Cilla Black’s “Surprise, Surprise!” show, but without the Wings livery. Does anyone remember an edition of the show with an open-top tour bus?

It might have had something to do with football, based on a picture of the front of the bus at the time with “We’ve got the Cup” 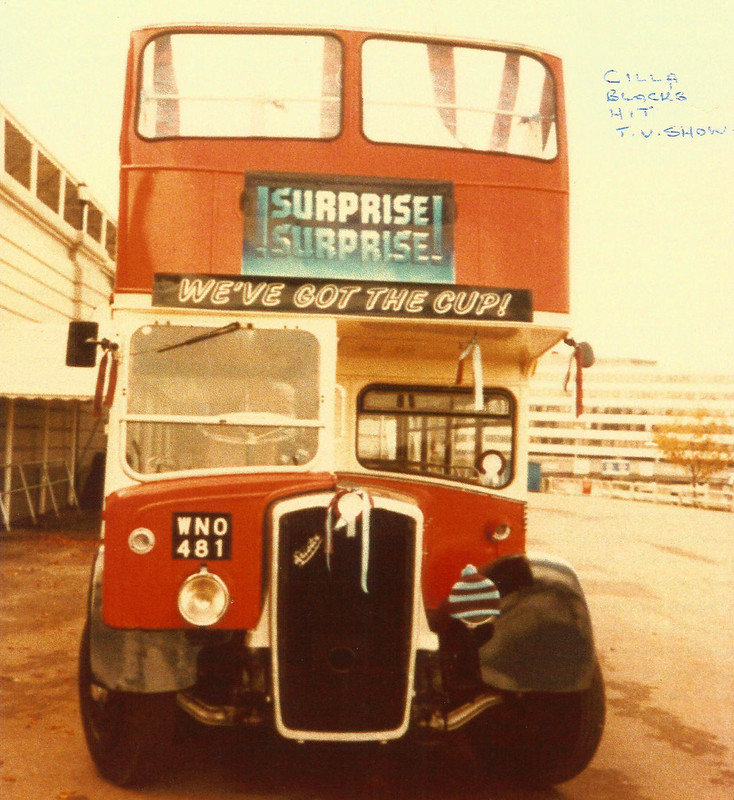 The image is dated July 8, 1992. There is what looks like a claret and blue cap on one of the headlamps, which is suggestive, but the only honour for a team of those colours in 1992 was Burnley winning the old League Division 4. I imagine there’s a Div 4 trophy, but a cup?