A wogblog article about a painting of Paul’s called ‘Bowie Spewing’. 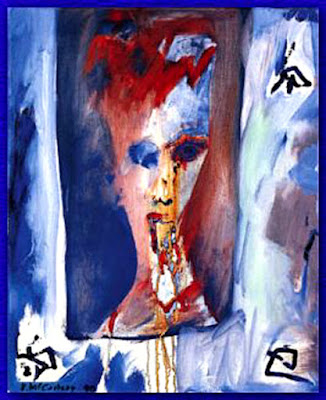 An excerpt from the article reads

David Bowie said “Paul sent me a picture of the painting, together with the question if I would mind the title of it. I answered ‘Of course not, but what a coincidence, I am currently working on a song that’s called “McCartney Shits”.

From a review at a 1999 McCartney exhibition in Siegen, Germany, where the painting was one of many on display: Although entitled “Bowie spewing”, this small painting was not planned as a portrait. As so often the case with McCartney, the subject emerged during the painting process. Experimental painting with no other motive than “just to let the paint lead the way” (McCartney) results in a physiognomy which reminds the artist of David Bowie at an early stage in his career, the time of his “Ziggy Stardust” album. This second level of consciousness causes him to include a frame in the composition of the picture, which he then decorates with mystic symbols. Using a picture within a picture, McCartney reflects here on painting as a medium. The paint running down the canvas breaks up the narrative illusion, connects the levels and draws attention to the material nature of painting. Here too McCartney makes use of his mental store of images as he is reminded of a motif similar to “Bowie spewing” on a Polaroid photo which Linda McCartney made of Bowie.

[x-posted in the ‘David Bowie‘ thread]

I quite like some of Paul’s art, but definitely not all of it. This, I’m having mixed feeling about. It’s… different.

The bottom branch of that tree sure looks like a wrench/spanner.