vonbontee said
maybe he just thought it had a distinctive trademarked look?

Possibly, but why then did he use the Rickenbacker on tour with Wings.

Actually the only reason he used the Rickenbacker exclusively with Wings on tour was because his first Hofner (the one from the late Hamburg/early Cavern days) got stolen at the end of the 60s so he retired the one he still had and locked it away at home for safekeeping. Nothing really to do with the Ric being a “better” instrument, he likes both depending on the application. The Ric has more attack but the Hofner has a “goopier” sound that you just can’t replicate.

Paul does use the Rick in the Hello Goodbye video. I believe he also uses it, in the I Am The Walrus video too.

Here’s a log per album of what bass Paul used:

Please Please Me and With The Beatles (also including How Do You Do It , Love Me Do (Ringo), From Me To You , Thank You Girl , She Loves You , and I’ll Get You ) 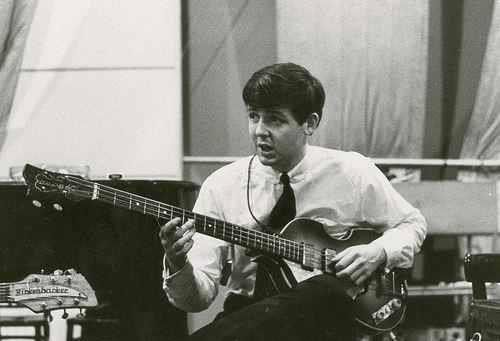 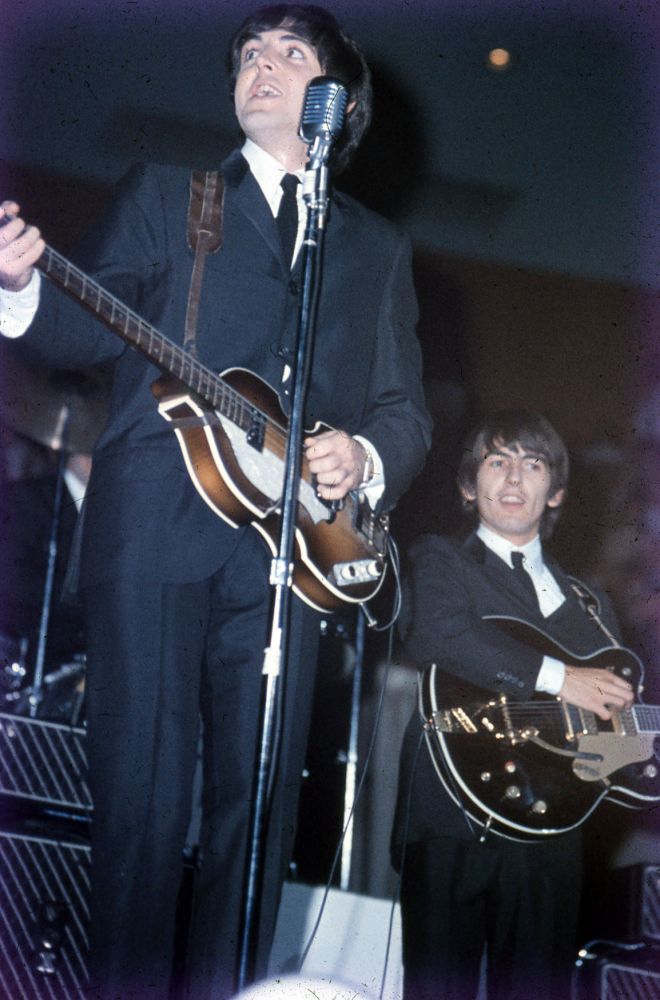 Rubber Soul (also including Day Tripper , We Can Work It Out , and 12 Bar Original) 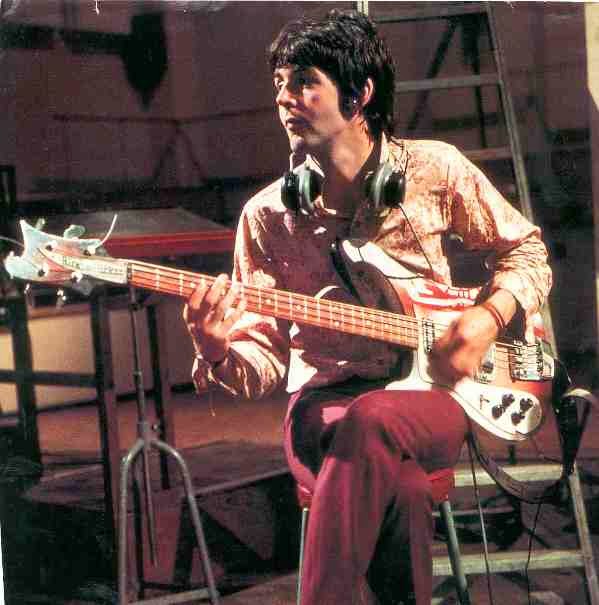 The Beatles (also including Hey Jude , Revolution , and a number of outtakes) as well as possibly one of these 2 guitars 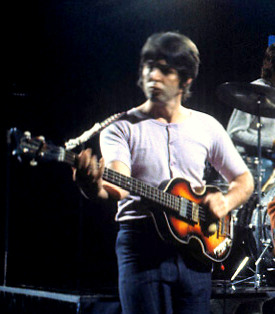 Abbey Road (also including The Ballad Of John And Yoko , Old Brown Shoe , numerous outtakes, I Me Mine , and Let It Be )

as well as possibly

Most likely this, although since there is no photographs of The Beatles in the studio as The Beatles from 1970, I cannot say for sure

McCartney through Wings and then through Flowers In The Dirt

Flowers In The Dirt onwards 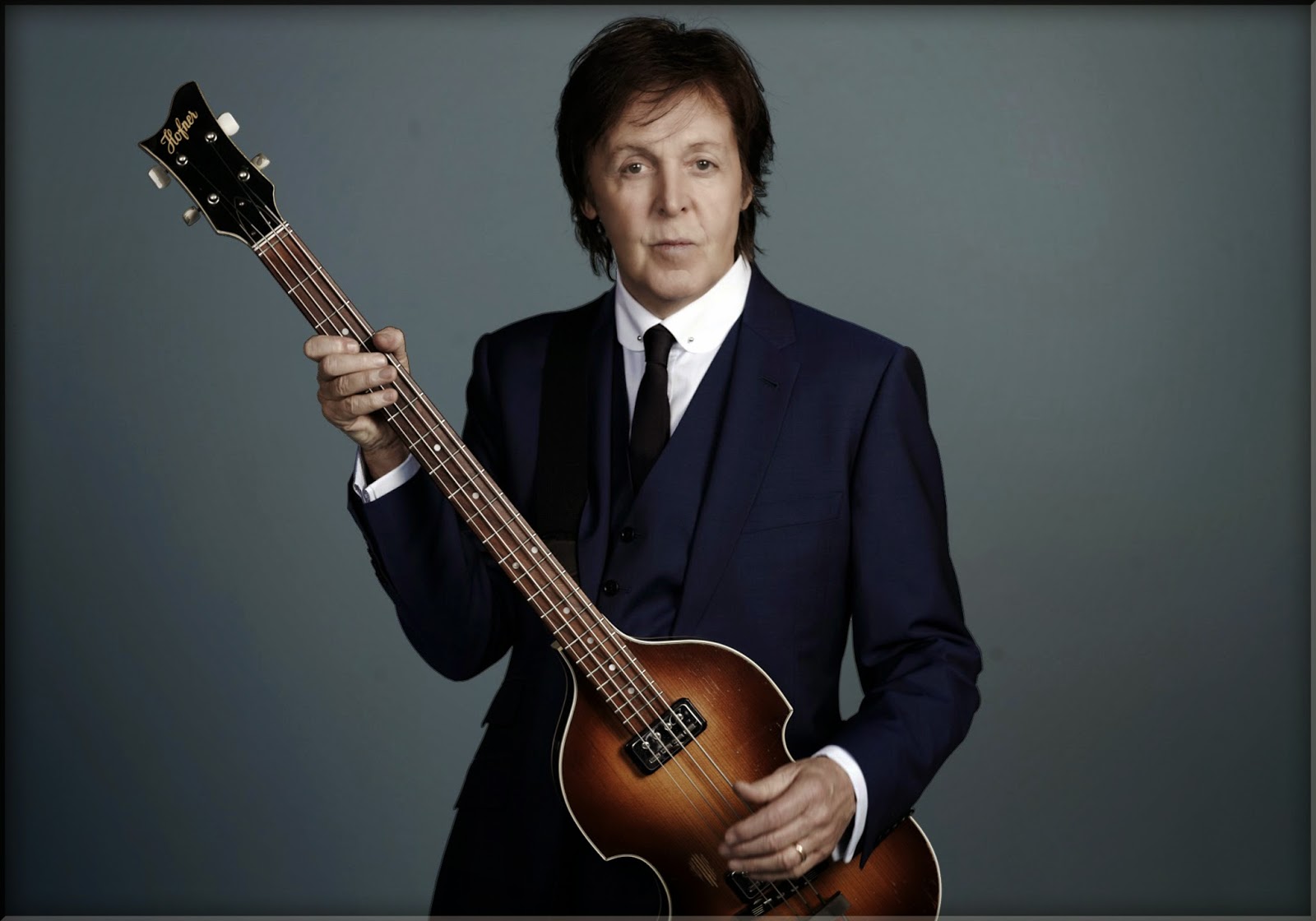 That isn’t entirely accurate. I know for a fact that Paul plays the Hofner on “With A Little Help From My Friends “.

You’re the one who’s not entirely accurate, Paul didn’t use his Hofner at all during 1967 (with the exception of the Penny Lane video) and there’s photographic evidence that Paul used his Rickenbacker for that song.

There are 2 things you forgot to do:

1. Do some research on the topic

jsullivan2112 said
That isn’t entirely accurate. I know for a fact that Paul plays the Hofner on “With A Little Help From My Friends “.

Curiosity is killing the cat. How do you know this for sure?

@Dark Overlord Don’t forget that during Flowers In The Dirt (and sporadically after that) he also used his Wal 5-string bass.

teeray
A Beginning
Members
Forum Posts: 2
Member Since:
2 May 2017

I would offer than Paul probably played his Hofner instead of the Rick due to the fact that image was still very important when the Fabs were touring and he felt the fans would WANT to see him with the violin bass.  Plus, technology didn’t have the ability back then to project the sound over the screaming fans.  So, if he happened to play a bass that wouldn’t stay in tune–which the Hofners are very prone to do–it wouldn’t be noticed.  Paul himself said the screams “covered a multitude of sins”.  By the time Wings was touring, technology had advanced to the point that you NEEDED to play a quality instrument in concert…hence the Rickenbacker bass.  But later on, Paul commented that watching himself play the Hofner during the 1969 rooftop concert, he realized how light and easy it was to play after having played Rickenbacker, Yamaha and Fender basses, which he said weighed you down.  So, maybe that had a hand in him choosing to play his Hofner bass in concert since he started touring again in 1989.  All three times I’ve seen him, he’s had the Hofner.  And as a fan, I prefer to see him playing  it, as did the fans back during The Beatles touring years.

I also wonder if he ever uses his Rickenbacker bass to record with.  Unless I’m mistaken, I haven’t seen it listed as one of the instruments he plays on his CDs, whereas I often see the Hofner mentioned, along with his Epiphone Casino and Texan guitars.

Probably because Brian Epstein had an enforcement deal with Selmer who distributed Hofner product in the UK, for Paul to use a Beatle Bass up to 1966 or as long as they performed live, he has a similar deal with Vox Amps and Tom Jennings.
When the Beatles needed new amps for their first EMI recordings because Norman Smith had to patch and ground all their old 50’s amps (Fender and Gibson tweeds by the way) to stop them buzzing and humming, Im sure the tubes were the originals because when it came to techincal stuff the Beatles didnt know anything about amps or guitars and that holds true up to today lol,  so anyway Eppy told TJ/Vox that as long as he was the manager the Beatles, they would use Vox only and as you can see over the years they recieved all new amps every year up to 1967 with the Defiants, Conqueror and UL730 (http://artdaily.com/index.asp?…..zF8ZrwoB
SEE Hello Goodbye VID.
After 1967 Epstien died and Tom Jennings couldnt keep up with demand for his amps with EVERY British band using them (until Marshall and The Who) he farmed out his manufacturing to Triumph swindled out of Vox to Thomas Organ Company in the USA and his creditors in the UK.
In 1968 the Beatles contacted Fender and received a Bassman 100 w/2×15 cab for McCartney , John a Deluxe, George a Twin, Paul a Jazzbass, George a Rosewood Tele (not received until 1969 and later given to Delaney on the 1970 Bonny and Delaney tour), John a Fender VI bass, along with a Fender PA and a Rhodes Piano (Billy Preston can be seen using it) and some various effects, pretty much anything they wanted, esp when CBS/Fender found out they were making a movie. Georeg may have recieved a few Strats
The Beatles were very loyal to companies that gave them stuff, even if there was no contracts,  thats why George stuck with Gretsch and John, Rickenbacker, John Hall Jr can go on and on about how he didnt endorse the Beatles but his daddy sure used his UK distributors Ross Morris to sell a buttload of them with Johns face in ads and thats why Fender could never get in the door until 1968, although in 1964 Paul bought or was given an Epiphone Texan and a Casino, which may have been in a round about way due to his Selmer deal???? I think Epiphone was distributed by Selmer in the UK and later John and George played Casinos and in 1965, John and George did send Mal out to buy some Strats for Rubber Soul Sessions and he came back with 2 Sonic Blue Strats (Rocky) but they were hidden away in the studio. you can go on and on and mad with all the mysteries of why they played this and not that, theres other instruments that were given to them like the Coral Sitar that George was given and loaned out, and the Gibson SG that he later gave Pete Ham and a Guild XII electric given to John and Johns orange Gretsch 6120, Pauls lost 1965 Hofner with gold hardware. then theres Ringos drum sets and snares, lol Have fun!