Kisses On The Bottom

Paul will always look great in person due to that winsome smile.

Too bad he's not allowed to screen pictures of himself that get published.

The whole album is already out there!!

Not that i know where. I also have no idea how its out there. Also a listing on amazon has it titled as Kisses On The Bottom , lyrics which appear in one of the tracks Sit Right Down and Write Myself A Letter. I presume that wont be the end name.

This blog has a new article on the album and the track 'My Very Good Friend The Milkman' which is below. More of these will be uploaded over the next few days i would imagine.

And ive also read that some artificial work has been done on Pauls vocals on some of the tracks. I have no idea how accurate that is. Supposedly it was used on Good Morning New York but on a larger and more noticeable scale.

Alas, sounds like he's got laryngitis.... could that famous voice be through?

I've created a page for this album, putting together all the information I've been able to gather so far: https://www.beatlesbible.com/p.....he-bottom/

Please leave comments if you have more to add. I may do individual articles on the songs when more info comes out (performers, confirmed tracklisting etc).

Incidentally, the tracklisting I have is different from the one on Wikipedia. This is based on radio promos that are circulating, and the fact that Only Our Hearts segues into I'm Gonna Sit Right Down.

Kisses On The Bottom ???

Yeah, its not the most appealing album title. There must have been a better title he could pulled from one of the tracks on the album. Still, you wont forget it: "Im getting 'Kisses On The Bottom ' for Valentines Day"

I was listening to My Valentine again, and it seems like such a good song for those crooners. If he wasn't dead, I'd say Dean Martin should cover it, it has that Deano slow melodic thing going.

I dunno but I like it. It's sexy and fun

I'm already thinking of it as "Kiss My Arse" (as we'd say here in the UK). I quite like the title though - it's certainly memorable. 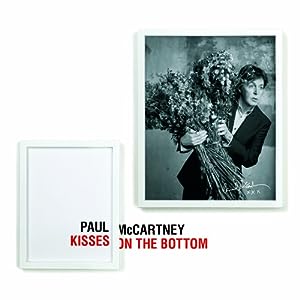 The released cover art for those who havent seen it yet. Im kind of hoping that this is all some big scam and a completely different title and pic will be released nearer the release date, really not warming to this.

I'm thinking.. maybe it's Paul's response to critics who are going to bash him for the album.

It refers to a line in the song "I'm Gonna Sit Right Down and Write Myself a Letter," where the "Kisses On The Bottom " mean the xxxx's at the bottom of the letter. I think it's a neat title in that it is intriguing and can have that triple meaning: the letter thing, kiss my arse, and a sexual meaning. Funny...The Beatles were always about multiple meanings. The title will also garner some publicity...whether it's good or not, only time will tell.

I have only listened to My Valentine because it is the only one Paul released. I want to be surprised when it comes out. There are mixed feelings at Paul's forum, but I think those people are mostly overreacting because they like "rocker" Paul more than "Honey Pie " Paul. I like both incarnations, so I'm excited, but I can see why you wouldn't be if you don't like standards or cover albums. That doesn't mean the album will be a disaster, though. I'm more concerned about the alleged use of autotune. I hope it's not true, and if it is, I hope it's not too audible. I know many said he used it on GENYC, but I honestly don't hear it. He sounds pretty much the same to me, but with better production because it came from the sound boards and not some crappy video camera. Maybe my ears are just too used to hearing autotune, though, because today's music is covered in it???

(God , I need to go to sleep - final post.)
I'm thrilled for this. I love Sinatra/Martin/etc, and these types of songs should work with his voice. And Joe, it was fascinating reading that Diana Krall is playing piano on the album - she's Canadian, and she's got a great (according to my mother - she's a huge fan, so who knows?) cover of I think Things We Said Today out there, and it makes me smile someone who has such great taste is working with Paul. And isn't she married to Costello?

She is married to Costello. Some people have expressed concerns over Paul's voice being able to handle these types of songs because his upper register isn't what it used to be. However, I like the age in his voice. I loved it in Johnny Cash's, and I like it in Paul's. It means they're still singing...I'll take it over nothing any day!

I'm not really into standards, so maybe this album will get me into a whole new genre. I've already listened to all the songs on the album by the original singers. That's more than I'd ever done before!

I'm actually looking forward to this. I was a bit underwhelmed at first - all we've had lately are a live album, an orchestral ballet soundtrack and how this (OK, and a lot of tour dates). But what I've heard has been very nice, and I'm glad he'd got to record these songs before he hangs up the microphone for good. Wonder if it'd be as good as Nilsson's A Touch Of Schmilsson In The Night, a collection of standards which is just gorgeous (and produced by Derek Taylor, no less).

Diana Krall is the thing. I like her music.