LONDON (AP) – Calling cigarettes “a curse” on modern life, Paul McCartney banished them from his life over 30 years ago. But that wasn’t enough for the international pop music legend: Now he intends to scrap the iconic cover art of The Beatles’ 1969 Abbey Road album, which depicts McCartney with cigarette in hand. “Look, ciggies killed me best mates George, Derek Taylor, and countless millions of others,” McCartney explained. “I can’t change that. But I can alter the past to pretend they never existed. It’ll still be the same cover, only with the cigarette Photoshopped out. I’m not going to replace me bare feet with shoes or anything.” McCartney went on to explain that this is just the first step in an ambitious program which will see cigarettes digitally removed from all Beatles film footage by CGI. Additionally, he will re-record a single lyric in a Beatles song. “I always thought that ‘…Found my way upstairs and had a smoke’ was a bit iffy, anyways. So I’m going to change that to ‘Found my way upstairs and drank a Coke.’ Coca-Cola are sponsoring me tour anyways, so that’ll make everybody happy.”

I won’t believe any news I read today

I’m iffy on the situation if its true. I mean I understand why, but at the same time I feel the past is the past and you can’t change it. You can try to cover it up, but it still happened. And there is still going to be documentations of the old footage or music. I’m not going change out my Beatle movies, music, or posters to have the new and improve no cigarette.

This BETTER not be true!

I never even noticed he had a cigarette in his hand until I read somewhere that he did, so it wouldn’t bother me.

I’d have thought the drug connection and stigma attached would have been as concerning as smoking.

Anyway its a joke due to the day.

Not quite believable (to me anyway) but nice joke anyway!

I know smoking is terrible, but back then it just looked sexy.  I know I know, it’s awful.  I used to smoke, but.. 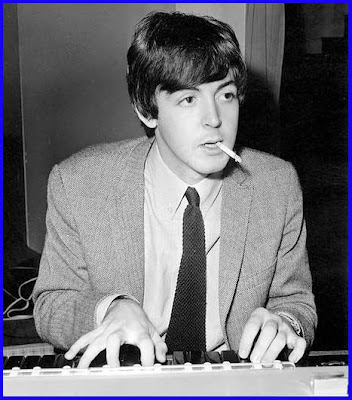 I think I’ve made my point.

Forgot my favourite one:

Can you tone it down a bit Paul?  Only you can look that suave while wearing a sweater vest!

Omg, he is so perfect! I could believe the cigarette omission part but coke! How much is Coke gonna pay Paul anyway, can’t you think of other lyrics lol.

Vonbontee, fabulous. Yes, very convincing; you had me going. And yes, the McCartney-Ono is priceless.

McCartney-Ono? Am I missing something?

I got an idea:  replace Paul’s bare feet with penny loafers, and replace the cigarette in his hand with an ALL PORK hot dog.

McCartney-Ono? Am I missing something?

Yeah, I saw that.