As some of you may know, Johnny Cash was known as “the Man in Black” for his habit of wearing mostly black on stage.

Well, my “Man in White” isn’t about St. Paul, nor about our knighted Paul, but about John.

I’ve noticed that John seems to have had a penchant for wearing a lot of white — particularly a white jacket and slacks (and shoes).  One video I saw of him playing “Imagine ” showed him wearing white, and also playing a white grand piano.

So I wonder, what’s up with John and the color white?  (And was he influential in choosing white for the White Album …?)

Another famous pop musician who has worn a lot of white is Carlos Santana — but he did it as an expression of the “spiritual purity” he found in a certain branch of Hinduism under a certain swami (and in the last couple of decades he has reverted to more colorful clothes).

Another was Pat Boone, but let’s not go there, girlfriend.

Anyway, I wonder if there’s anything going on there, or am I making a mountain out of a molehill…?

“Imagine the clouds dripping. Dig a hole in your garden to put them in.” This and other “imagine” statements from Ono’s Grapefruit inspired John’s “Imagine .” Clouds and white were important to them. “Sitting on a cloud, I Call Your Name .” When Yoko puts out John stuff it’s often white: The John Lennon Letters, The Signature Box. I always assumed the white was a cloud (such as on the John Lennon Anthology box) seen up close.

One whole room at the Dakota was/is? all white. When John promised he’d contact Julian when he eventually passed on, he said he’s be sending him a white feather. (Julian has a foundation called White Feather I believe).

Anyway, I wonder if there’s anything going on there, or am I making a mountain out of a molehill…?

There is definitely something to it. Even the Lennon Suite in the HDN hotel in Liverpool is appointed heavily in white. 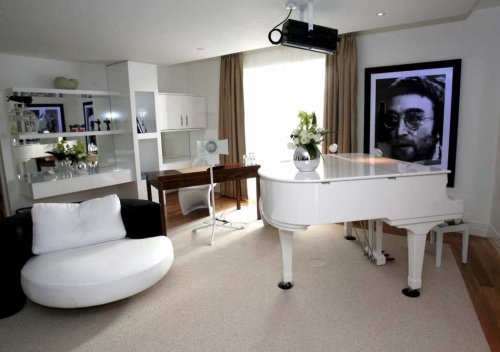 I believe it’s in that Jann Wenner interview where John was discussing the Apple boutique and various schemes, and he drops a minor detail about how Paul had an idea for a place where you could buy all-white clothing, and how John thought that it was quite a nice idea. Such a detail in praise of Paul really stands out in an interview where John spends much of his time attacking him, and as such, it occupies my thoughts occasionally. Like, did John (or Yoko) already have a “thing” for an all-white motif at the time and did Paul merely suggest it because he knew it would appeal to John? Or did John take the idea to heart and then become enamoured with whiteness all around? Or maybe the two of them just simply had a similar idea for appealing fashion independently of one another? Or, finally, maybe it wasn’t Paul or John OR Yoko but Richard Hamilton (White Album designer) who set off some kind of communal obsession with whiteness all around? Who knows??

Trivial thing to obsess over, I know, but Funny Paper thought it was worth starting a thread over, so I’m not alone in that respect!

[Minor digression: I was interrupted in this post by a TV commercial for “Glee sings The Beatles” /Beatley moments]

Interesting topic – now I’m wondering how it all started as well.  That “Imagine ” film clip with the white room, piano etc is so intriguing.

I’m thinking it’s possible that rather than “spiritual purity” per se symbolized by white (the usual connection made, I think), for John it may have been that white conjures up:

the zen concept of “emptiness”

Perhaps having all the white around let him see the colors in his mind more clearly and vibrantly. There must have been an explosion of color always swirling around in that talented brain of his.

Then there was John’s all white Rolls Royce (as this 1969 photo shows):

Another of those synchronicity moments – I was just watching Episode 7 of “Anthology” and there is John, with Paul, in the USA announcing the formation of Apple.  At the press conference he is wearing 2 badges; one for a ‘bus prefect’ and one is just plain white.

It might be the cleanness of white, the purity it represents, new start etc.

John also wears the white suit and shoes on the Abbey Road cover.

Then there was John’s all white Rolls Royce (as this 1969 photo shows):

I didn’t know about that…did he get sick of riding around in the psychedelic one? That’s not the car he had the accident in, is it?

No, John had the accident in an Austin Maxi. He never drove either one of his Rollses, he was always chauffered. (And thank our lucky stars for that! Myopic John was one shaky driver.) The white Rolls was his second one, btw… the psychedelic one had originally been black.

Interesting question, Funny Paper. I had always assumed the wearing of white had been Yoko’s influence, but never gave it much more thought than that. As I’ve been pondering it, though, a few other things spring to mind. I think it was kind of a fashion trend beginning in about 1967, but also maybe the Maharishi and the experience in India had something to do with it. Plus, I like what Ahhh Girl said: “Perhaps having all the white around let him see the colors in his mind more clearly and vibrantly.” Makes sense to me. An artist’s canvas, an art gallery’s walls…

In any case, it influenced the Apple Computers design aesthetic. At least that’s what I have always thought. Which is why my iPhone is white.