Shamrock Womlbs said
Why John and Yoko got married in Gibraltar? Wouldn't it have been possible in London, for instance?

Here's what Joe wrote about it https://www.beatlesbible.com/1.....-to-paris/

Yeah, i've read that but my question is because of this : '...We want to get married. Where can we go?' And he called back and said, 'Gibraltar's the only place.'
Why was it the only place?

Had they married in the UK, they would have needed to "post the banns" at least 15 days before any marriage, @Shamrock Womlbs.

The banns are a public announcement put on display at either a Christian church or at the town hall to inform of the intention of two named people to get married. They are a legal requirement (now extended to 28 days).

To meet this requirement, John and Yoko would have had to wait over a fortnight. They were looking to avoid any wait, and Gibraltar was the closest British territory which didn't have an inconvenient wait period.

Gibraltar was the only place simply because they could fly in, get married, and fly out again - no residency requirements necessary, and no need to post the banns.

I never knew that you had to do that, thanks man.

Little Piggy Dragonguy said
Why would John say he was an only child even though he had two sisters? Like in those information thingys from the sixties, they always say he has no siblings.

They were only half siblings, plus it was a bit of a taboo thing as Julia and Dykins weren't married. And John didn't really grow up with them, I don't think.

Yah even though he had I think 3 siblings, he didn't grow up with them in the same house so they might of not felt siblingish to him.

In 1942, Julia began an affair with a soldier, and became pregnant by him in 1944, giving birth to Victoria Elizabeth in 1945, who Julia was pressured into giving up to adopt by the Stanley family. She was adopted by a Norwegian couple, and John knew nothing about her until 1964, when he made efforts to find her. He was never successful, and they never met. Ingrid Pederson, as she is now known, came forward some years ago to reveal herself, following the death of her adopted mother.

And then there are two daughters with Bobby Dykins, Julia (born in 1947) and Jackie (1949), who John got to know in the mid-50s when he re-established his relationship with his mother, and they appear to have remained in contact for the rest of his life.

Hey, Beatley friends, I am writing a paper on John for chorus, any ideas for things I should include? I already have most of it done because my chorus teacher has no idea how much I love to write and has told me to make it "at least 100 words", but I thought you guys might have some extra interesting details to put in there.

His house Kenwood is surrey was the origin of many great songs, and wild psychedelic stories.

I recommend doing your own research on this house, as it is the subject of many fascinating Beatles tales.

Although I would argue George had the best houses in Kinifauns and Friar Park, John had some killer homes as well, Tittenhurst Park being one of the most beautiful spots for a photoshoot.

In 1966 John spoke about how his favourite colour was black, one reason being it didn't need much thought to get things to match, and even his first Rolls-Royce was decked out completely in black.

Was Yoko and their desire for peace the reason why he changed to favour white?

Did his colour choice change [first] due to the effects of more hardline drugs changing his views?

Didn't the Beatles get fed up being asked questions like what their favourite colour was, and here, 52 years later, is me asking about John's colour choice. 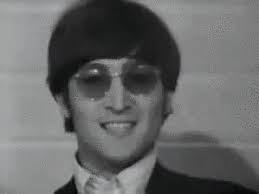 That’s true. And actually one of the reasons why I find him so interesting. Life is not static, we have the ability to admit our mistakes and change our minds.

I thought Paul said John was color blind once but maybe I'm not remembering right.

Anyone ever see or hear anything about his half-brother that his father had to his young wife? Remember reading a book about his father.

I never heard of a brother. I always thought his dad had a daughter.

David Henry was with Alf at John's house.

Having been looking around the interweb there are lots of suggestions that this is David... He is Professor David Lennon, a Professor of Physical Chemistry at the University of Glasgow. I cannot confirm that this is the right David Lennon, only that he is believed to be by many; that age-wise he could well be approaching fifty (the last picture is the picture used on his staff page at the University of Glasgow so could be more recent than the others); and that physically he does seem to have some Lennonesque features (the nose in particular reminds me of the Lennon family nose).

So, I'm not saying it is or isn't, only that this is the only suggestion for the identity of David I could find.

There is nothing to be found about Robin.

It doesn't surprise me that there is little concrete information about the brothers. While it's possible, even probable, that John and Alf had a phone conversation or two after their last meeting and before his death in 1976, it seems unlikely he had any relationship with his younger half-brothers. David would only have been 11 when John died.

Unlike his sisters from Julia and Bobby Dykins union, they didn't know him and so haven't been sought out as they probably have little to add about John (though it wouldn't surprise me if Mark Lewisohn tracks them down for the second and/or third volume of All These Years if only to check there isn't any important documentation within that part of the family that is important).