Here is a list so far of some of the events and celebrations scheduled so far.For John Lennon ‘s71st birthday coming up.This October 9, 2011.

John Lennon ‘s 71st birthday will be celebrated in Hollywood, CA., on Oct. 9 with a potluck “Birthday Breakfast and Brunch With the Beatles” beginning at 8 a.m. in front of the Capitol Records tower at 1750 N. Vine St., Hollywood, CA. The breakfast will take place at Lennon’s Hollywood Walk of Fame star. The event will begin with with music from Chris Carter’s “Breakfast With the Beatles” on KLOS-FM from 8 to 11 a.m. Following the broadcast, fans will perform Lennon and Beatles songs. Chris Carter will also join the event at noon to lead the cake-cutting ceremony.Fans are invited to bring flowers to place around Lennon’s star, a potluck dish, music and poetry to share, plus blankets and folding chairs to sit on.

Sugar Loaf — “Lennon-Live” comes to the Lycian Centre for the Performing Arts on Saturday, Oct. 8, just in time to serve as a celebration of John Lennon ’s 71st birthday the next day, on October 9th.The show, presented by Kings Theatre Company, is a tribute to the music and life of John Lennon from the Beatles era through his solo career.“Lennon-Live” stars Peter Gendron, a singer songwriter originally from Rhode Island. Starting off in the cover band circuit and fronting his own original band in the 1980’s ,he played all over the country. One of his original songs “Temporary Solutions” was included on the Living Rooms “City History” album in 1984 along with local legends the Schemers and the Neighborhoods.

Artists Chris Buhalis, Annie & Rod Capps, Wire in the Wood, Dave Keeney, Sophia Hanifi, Ypsitucky Colonels, Jack Spack, Eric Kelly, Derek Daniel, Me and Ryan, and Danny Kline. They will all perform selected works of John Lennon to commemorate his October birthday.  All proceeds go to the local Chapter of Veterans For Peace for their Peace Scholarship fund which assists college students studying any college level course aimed at conflict resolution or peace studies. Having served in the military, Veterans For Peace members have been trained to wage war. These same veterans can think of no better way to prevent future wars than to help foster education in peacemaking.  The John Lennon concert will take place at The Corner Brewery, Forest and Norris, Ypsilanti on Saturday, October 8th, 2011 starting at 7pm. Tickets are at the door for $10. For more information, call 487-9058, email mailto:wolverbob@gmail.com

This October, In Commemoration Of What would Have Been The Month Of John Lennon ’s Seventy-First Birthday , Long Island’s Popular Beatles Tribute Bandmostly Moptop Will Present A “John Lennon Birthday Celebration” Concert unlike Any Other. In Addition To Their Acclaimed note-For-Note Performances Of Classic Songs From Both The Beatles And John Lennon ’s Solo Years, mostly Moptop Will Debut A Special Four-Part song Cycle Homage To Lennon’s Life, Art And Music called “Four John: A Rock ’n Roll Concerto.” Spoken Passages From Lennon’s Book And Play “In His Own Write” Will Be Performed During The piece By Moptop’s Anthony Pomes. Come Together With Mostly Moptop For Their Ambitious New “Concept Concert,” And Become A Part Of The Celebration… For John.
Where: DHPAC At Five Towns College
305 N. Service Rd
Dix Hills, NY

We are ringing in John Lennon ’s 71st birthday with a no-holds bar celebration of his life and his music. From the skiffle days of Liverpool to the senseless murder at the Dakota Building, Lennon’s impact on the pop culture world is unmatched.  He left us so many groundbreaking tunes, both with the Fab Four and as a solo artist, that whittling them down to the definitive Best of the Best for a Sing-Along was no easy feat. But we did it.  We poured thru concerts, films, and amazing archival footage to tell the whole story of the mischievous and intellectual Beatle from start to end.  Warning: this show packs a emotional punch.

The Peace Abbey is dedicated to creating innovative models for society that empower individuals on the paths of nonviolence, peacemaking, and cruelty-free living. We offer a variety of programs and resources that teach, inspire and encourage one to speak out and act on issues of peace and social justice. Faith in action is the cornerstone of our fellowship and activist pacifism is our creed.

IMAGINE PEACE TOWER will next be lit on October 9th 2011 at 8pm (see your local time here) until December 8th and then from December 21st to 31st.

Message from Yoko Ono Lennon
Dear Friends,
On October 9th 2011, I will relight IMAGINE PEACE TOWER in Iceland in memory of my late husband John Lennon .
Please ask all your friends to join us by Tweeting wishes to IMAGINE PEACE TOWER (@IPTower), which you can do at IMAGINEPEACETOWER.com (the Tweet box is top right).
You can send wishes by post, email, Facebook & Twitter.

IMAGINE PEACE TOWER will be relit at 8pm on 9th October 2011. Tweet your wishes to @IPTower

Penegrine9, if you click on the spanner icon top left of your post it should bring up the option to delete posts.

Thanks for all this info Peregrine!!

Thanks for your help meanmistermustard.I’m going to go delete that duplicate thread right now.

Your welcome mithveaen.I’m glad to be of help.

Note by Ahhh Girl 12 October 2011: This post originally began a different thread. Posts 9 and 10 were a part of that thread.

I’m just going to post all these new John 71st birthday articles, photo’s and video’s in this one John Lennon News thread.

As Joe has suggested, which is a good idea.So I don’t start alot of threads for each article etc.

The Imagine Peace Tower, an artwork by Yoko Ono on Videy island off Reykjavík, was lit for the fifth time yesterday, on the birthday of her late husband, John Lennon . It is dedicated to their struggle for world peace.Ono and her and Lennon’s son Sean will play at the Iceland Airwaves festival which kicks off on Wednesday with the Yoko Ono Plastic Ono Band, Morgunbladid reports.“We have come to Iceland every year since the Imagine Peace Tower project was launched and I had started to think it was strange to always come and then leave just before Airwaves began,” Sean Lennon said.

John Lennon fans gathered in Hollywood at John Lennon ‘s Walk of Fame star at the Capitol Records tower to pay tribute to him on his 71st birthday Sunday.

Photographs – John Lennon ’s 71st.Birthday was celebrated In Hollywood today at his star in front of Capitol Records.

John Lennon would have turned 71 on his birthday today, Oct. 9. Best known as one of the founders of the Beatles, he is recognized as one of the greatest musicians and songwriters of the 20th century.Beyond his music, however, Lennon has even eclipsed Paul McCartney , the most famous surviving Beatle, as an icon. A BBC poll in 2002 ranked Lennon number eight in a poll of the 100 Greatest Britons; McCartney and George Harrison were not even in the top twenty, and Ringo Starr was not on the list.

Why does John Lennon still hold such fascination, 31 years after he died and 71 years after he was born (Oct. 9)? A birthday exhibit titled “Gimme Some Truth ,” in a gallery in New York’s SoHo, showcased his artwork and gave a glimpse into that special mentality that led to the founding of the world’s most successful band and the opening of so many social and cultural doors.

Imagine John Lennon celebrating his 71st birthday today. Recently San Antonio Examiner Jack Dennis and music enthusiast Liz Hajek traveled to New York to spend a day with May Pang, Lennon’s girlfriend for almost two years in the early 1970s.After enjoying 12 hours with May in her home, and at a nearby seafood restaurant near Pomona, NY, the two Texans understood why John Lennon was attracted to such a beautiful and insightful lady.

Awwww.  I don't think Yoko's all that bad.

The Reykjavik Grape Airwaves Fancy
October 14, 2011
A Traditonal in Our Family

I did not know what to expect from tonight’s lineup. Essentially it was Plastic Ono Band and various sub-voltrons thereof. I was afraid the gig would be hermetic and insular. People playing for their friends. This could not have been further from the truth. This was an incredibly welcoming show. It was like the audience were in the Plastic Ono Band’s living room, and the members of the household were taking turns playing songs.

It's a big week for Beatles fans, which is like saying it's a big week for people who like air and water. Yesterday was John Lennon 's 71st birthday, and tomorrow is the 40th anniversary of “Imagine .” The Martin Scorsese-directed doc on George Harrison 's life, the beyond stellar George Harrison : Living in the Material World, premiered last week on HBO. Not to be outdone, Paul McCartney married for the third time, tying the knot with his girlfriend Nancy Shevell. Lennon's legacy is obviously massive and influential, and his message lives on now, almost 31 years since his murder in 1980. But aside from all that, aside from the rightful adoration and worship – though Harrison became our favorite Beatle this week – is the inherent creepiness of most every wax figure made of Lennon.

Theatre Within’s 31st Annual John Lennon Tribute will take place at Le Poisson Rouge, 135 Bleecker St., New York City on Saturday, December 10, 2011 at 7 pm. Now recognized as the longest running John Lennon Tribute in the world, our annual celebration of Lennon’s life, music and eternal message is always a warm and wonderful evening and this year will be no exception. 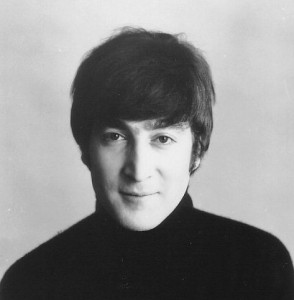 It’s not quite here yet, but if we’re going to go early…

Not many a day goes by without thinking of you John. Miss you tremendously.

Will be playing your music.

I know its not here yet, I was the first person to start Paul’s birthday thread, I wasn’t in Ireland for Ringo’s and God help anyone who starts a George birthday thread before I do Yes happy birthday Sean. Can’t be easy having it on the same day as his Dad’s. He loved you so much. 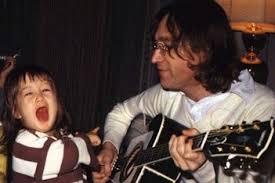 Yes!  Happy Birthday to Sean too!

“I think im gonna be sad, I think its today yeah.”

Happy Birthday John! Sorry you couldn’t make it to 2013 – you’d find much to enjoy, probably much more to complain about, and we’d all have loved to hear what you had to say (and sing) about it all.

I’ll have a drink tonight in your honour! Or maybe two.

Pull up a stool Von Bontee, using my Imagine mug for the first time ever tomorrow

But what to put in it?