Home
Did John Lennon write all his songs ? | Fab Forum

Did John Lennon write all his songs ?

Here’s a true story you will find hard to believe from a very reliable source.Once upon a time there was a very talented songwriter guitarist living in Los Angeles in 1969 . He wrote a lot of songs and always sent them to a music publisher in Hollywood . One day in mid 1970 the publisher called him and said someone wants to buy a few of your songs but they want the complete rights to them and have offered $10,000.
Well back then $10,000 was an awful lot of money so he agreed to sell the complete rights. The musician who wanted them was at the time going cold turkey and had a heroin problem but he needed to produce an album and only had a handful of material. One of the songs was “Working Class Hero ”. But there’s no doubt John Lennon was an amazing songwriter/talent/singer. I guess he was under a lot of pressure then but I would have thought he would have given some credit to the writer but on the album it says all songs written by John Lennon and Yoko Ono. Do you think this is true ?

No. not in the slightest. Sounds like a story from those terrible ‘publications’ who make things up and stick in mentions of “a source” as if it makes it credible. Who is your “very reliable source”, links would be helpful, basically anything to back up the claims? 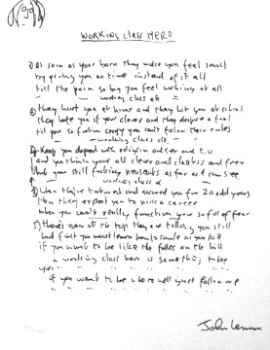 The musician who wanted them was at the time going cold turkey and had a heroin problem but he needed to produce an album and only had a handful of material. One of the songs was “Working Class Hero ”. (Snip)

I’m a little confused as to what you meant with these two lines. The way it is written, I thought you meant that “Working Class Hero ” is one of the few songs that Lennon had already, and he needed more songs to go with it. However, I can see why meanmistermustard read it the way he did. I doubt John bought songs from someone else, but I will give way to the O Knowledgeable Ones on this site for further commentary and discussion on the topic.

I mean, it could have happened. Lennon was in a pretty bad way in 1970, after the heroin, therapy and implosion of the Beatles. But in the absence of any evidence (who was the singer? Who was the agent? What were the other songs?) I’ll have to file it alongside “Bernard Purdie played drums on all the early Beatles recordings“.

Also, what on Earth would a Hollywood music publisher have made of Working Class Hero , written by an LA-based songwriter? It feels so much like nobody but Lennon could have written it. Did the mystery songwriter also include “fucking” twice? Was the third verse submitted late, requiring Lennon to edit it in after the rest of the song was recorded? Nah, I don’t buy it without some evidence, sorry.

For me, here’s the real problem, the album having question marks put up about it’s authorship is John Lennon /Plastic Ono Band – the most personal and revealing of all John’s solo albums, that’s the only way the “mid 1970” claim works, as POB came out in December that year.

So, the idea we’re being asked to swallow, is that off the back of his Primal Scream therapy, John didn’t write a bunch of revealing personal songs, but bought them from a professional songwriter who just happened to come up with a set of uncommercial songs that echoed John’s real life and where he was on his journey at the time, and had peppered them with Beatles/Paul/Yoko references?

You only need look at the album to know it could only have been written by John. There are way too many personal references (and songwriting demos) for anyone to take the suggestion seriously!

And I’d say the same with any supposed “proof”. Maybe some ’70s John albums sound like they were phoned in, but POB isn’t one.

@Joe said
I’ll have to file it alongside “Bernard Purdie played drums on all the early Beatles recordings“.

This website uses cookies to improve your experience while you navigate through the website. Out of these cookies, the cookies that are categorized as necessary are stored on your browser as they are essential for the working of basic functionalities of the website. We also use third-party cookies that help us analyze and understand how you use this website. These cookies will be stored in your browser only with your consent. You also have the option to opt-out of these cookies. But opting out of some of these cookies may have an effect on your browsing experience.
Necessary Always Enabled
Necessary cookies are absolutely essential for the website to function properly. This category only includes cookies that ensures basic functionalities and security features of the website. These cookies do not store any personal information.
Non-necessary
Any cookies that may not be particularly necessary for the website to function and is used specifically to collect user personal data via analytics, ads, other embedded contents are termed as non-necessary cookies. It is mandatory to procure user consent prior to running these cookies on your website.
SAVE & ACCEPT