Quick update – I think the problems were caused by the mapping software. I’ve disabled it for now and things have been a lot more smooth and stable (though I’ve said that before).

I’ll look for plugin alternatives, but with over 2,000 blog entries with locations it’ll need to be one that lets me import the old data. I don’t really want to lose the map as it’s something that nobody else on the web has done (as far as I know, anyway).

Incase you didnt know the 502 Gateway error is still coming up at times. At times it will clear in 5 mins, other times its over an hour. Couldnt access the song section all yesterday afternoon.

Hi Joe, I’ve had trouble logging on for the last couple of days, I had an error saying it couldn’t establish a database connection.

Yip. Lost the site for over half a day yesterday (it wasnt working for all of yesterday from 12pm onwards) with a page saying something like not being able to establish a connection due to a database.

Is that connected with the 502 Gateway issues (see post 42)? The blackout seems to last for 5 minutes then gradually increase until its down for a long period of time.

Not a nice post to read on your birthday Joe, sorry about that. I do hope you had a fab day and enjoyed it to the full.

Hi. I know. Sorry, really sorry. I’m fed up with this flaky host – I think I’ll have to find a new company. My sysadmin can’t get to the bottom of it and I’ve lost patience.

Delay in mentioning it was because Ted was rushed to hospital on Weds. Thankfully ok, just precautionary, but he stayed the night there. So site downtime wasn’t at the top of my list. Birthday was lovely, apart from the hospital thing in the morning. Got a new iPad! Typing this on it now.

Anyway, bear with me. I’ll look for a new host and will migrate the site as soon as I can.

Great news that Ted is OK!

The site should be the least of your worries. Good luck with everything!

Wow good news that Ted is ok!!! Don’t worry about the site boss!!

The joys of servers, hosts and websites!!

Family should always come first no matter what so no probs there Joe. Plus we’re aware you’ve been battling these site issues for a while and its not on your side of the fence. Just hope Ted is ok. Crappy that it happened around your birthday, crappy it happened at all.

Hurrah! I’m on a proper keyboard now. iPad’s really weren’t made for typing on.

Thanks for kind thoughts, patience and everything. I’ve spent the evening researching web hosts, and have narrowed it down to a couple of contenders. I’ve contacted one to see if they can serve (no pun intended) my needs. Watch this space. I think I’ve realised that I need to pay a bit more to get rock-solid service that keeps this thing afloat, rather than trying to do it on the cheap. So bear with me a little longer and I’ll try to get it sorted out once and for all.

Ted fell over at nursery. He seemed fine, but 45 minutes later started vomiting copiously and went into a decline – we thought it might be concussion. The doctor said to take him to A&E (that’s ER, non-UK people) and they kept him in at night for observation. So I was there the night before and the morning of my birthday. They think the vomiting was coincidental to the bang on the head, but better to be safe than sorry. Anyway, it looks like he caught a virus but is on the mend now, thankfully. He also likes my new iPad (hope you can see this): 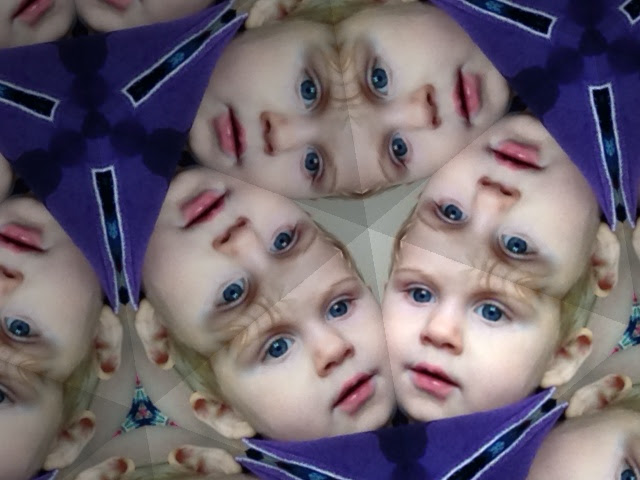 Used to do that with a kaleidoscope filter. Now I guess Photoshop? (off topic…)

Good to know Joe that Teddy is doing fine. I guess you can celebrate your birthday later

It was done with a built-in iPad app called Photo Booth. No Photoshop involved. It’s a bit of a novelty but fun to play with.

The 504 Gateway error is occuring on and off but the posts appear to be going thru, the site stopped loading last night yet a post was up twice this morning – even tho i couldnt get back on the site to repost it.

For anyone who does post duplicates you can delete the excess thread(s)/post(s) by the following:

Place your mouse cursor over the top left of the unwanted post/comment and a box will appear that looks like a spanner and screwdriver, text also appears that says “open the forum toolset”. Click on it.

A box will appear on screen that says Forum tools, select the ‘Delete this post’ option.

Another text box will appear that asks ‘are you sure’, select yes (if you are). The page should reload with your post gone.

Glad the site is back online – it always feels so wierd when I can’t access it.
(Joe – sorry I missed your birthday. I hope you had a great day, and I’m glad Ted is great. Oh, and nice picture – I can see myself wasting many a day on photobooth. Anyways, glad you had an excellent day.)

Hi all. I have a new server, which I’ve been busy preparing (with some great assistance from the hosting company, servint.net, which have been very patiently talking me through the process).

The site hasn’t been migrated yet; I’ve been busy backing up files and getting everything ready. I’ve got a couple of much smaller sites I want to move over first, just to make sure I know what I’m doing (The Beatles Bible is a mammoth site in comparison, and there’s much more that could go wrong – the database is enormous, and there are thousands of image files of various sizes).

I wanted to post this just so you know what’s going on. Also, at some point I’ll have to make a backup of the database and upload it to the new server, then point the domain name (beatlesbible.com) to the new place. During that crossover time there’s a chance that some comments and forum posts will get lost – this is unfortunate but unavoidable. I’ll do it earlyish in the morning, UK time, so most of the American users (the bulk of my visitors) are likely to be asleep, which will minimise the losses.

I’ve got a bit of time Saturday/Sunday/Monday, so I’ll hopefully get it all done by then. It’s worth taking care with, I hope you’ll agree. That doesn’t mean I won’t get something wrong though

The new server is fully managed, which means if something’s not set up correctly I can get professional people to look into and fix it. ServInt came highly recommended on webhostingtalk.com, where these things are debated and discussed (and many companies don’t come off well). I can’t promise there’ll never be any more downtime, but things should be more stable than they have been.

Great news. It’s really nice when you have a good tech support. Break a leg with the move!!

Hi. I don’t know if anyone else can read this at the moment – I hope so.

It’s been an interesting couple of days. I moved the site to a new server. All went OK, but the pages were loading quite slowly. The new hosts pointed out that the database was over 5 gigabytes – pretty massive. I noticed that one of the database tables was caching absolutely tons of data which it shouldn’t have been, and was probably the cause of all the downtime over the last few months. This one table entry was 5.1 GB (and should have been about 100 KB), and when I tried to run scripts to reduce its size the server would run out of memory because it was so massive.

I asked the host to temporarily move me to a server with more memory. This they did, though the rogue database table was still threatening to overload the server. So they made the site accessible only to my IP address while I carried out the housekeeping. Hopefully it’s now open to all again. The database table which was 5.1 GB is now 188 KB – hurrah.

Then a few other things typically went wrong, bits and pieces of code that were awry, but hopefully it’s largely running OK now. I’ll keep an eye on things, and I’m still looking at ways to get things running as efficiently/quickly as possible. However, the bottom line is that the site is back, should (fingers crossed) remain up. Please let me know if you spot anything that looks broken (here is best – I’m not sure the email is working properly at the moment).

Sorry for the downtime. Your loyalty and patience is always appreciated.

Its always stressful moving to a new home. Glad its all working properly Joe and you can afford yourself a cup of tea.

Ah, you can read this. That means I’m visible again! Hurrah!

Still some fine-tuning of the server going on, but the support team at the hosting company have been excellent. Once everything seems to be working fine I’ll get on with the next project, which is the mobile-ready version of the site.

I think I spoke too soon before. The database got clogged up again by the same crap as before, causing the server to slow down. So the project now is to work out what’s going on there. Time to roll up my sleeves and get to work.

Actually it’s time for bed – it’s midnight and I’ve been working on this all day. At least it’s running again, for now.