George is lovely as always

haven’t watched this in a long time but I must find time to revisit it.

Was listening to this earlier, I’m not a big fan of Extra Texture but this song, it’s a good un:

George was a real character…

How George pranked Phil Collins for his uncredited contribution to All Things Must Pass .

Collins’ connection with the Beatles dates back to 1964, when he was hired as an extra in their first feature film, A Hard Day’s Night. Then just 13, he spent the day alongside hundreds of fellow teenagers instructed to shout at the top of their lungs during the climactic television concert scene. Unfortunately, his musical purism ended up costing him screen time. “They wanted kids that were screaming, and I just sat still, which is probably why I was cut out of the film,” Collins told Rolling Stone in 2016. “I remember thinking, ‘For crying out loud, will you stop screaming? Let’s listen to the music!’”

His second experience with one of the Fabs was equally disappointing. In 1970 he was booked to play congas on a session for “The Art Of Dying ,” to be included on All Things Must Pass . “One night, our managers called me and said, ‘You want to go down to Abbey Road ?’” he remembers. “I said, ‘I’m a bit busy, I’ve just had a bath.’ And they said, ‘Well, it’s for George Harrison .’ I went, ‘I’ll get a cab.’ I walked in and there was Ringo Starr , Billy Preston, Phil Spector, Klaus Voorman, Badfinger, [guitarist] Pete Drake, [Beatles road manager] Mal Evans and George. Spector was introduced in this brusque way. He was like, ‘Who is this young guy, thinks he can play with the Beatles?’”

Eager to prove his worth, the 19-year-old attacked the song with brute force during the run-throughs – and soon he had the scars to prove it. By the time the recording began, his hands were raw and he could barely play. “After 90 minutes, I had blood blisters. They took a break, and then Ringo’s chauffeur came and said, ‘You’re finished.’” The sound of congas, if they appear at all, can’t be heard on the final mix. “When All Things Must Pass  came out, I looked through the credits and there was no mention of me,” he says.

Harrison himself remained unaware of Collins’ participation until 2001, when he was assembling a remastered package of the album in celebration of its 30th anniversary. He and Collins had become friendly in the intervening decades, so Harrison decided to have a little fun with the Genesis superstar. As an apology for not crediting him on the original release, he sent Collins a version of the song that he claimed featured his lost percussion contributions.

“I got a tape from George of the song that I played with the congas quite loud,” Collins told EW. “I thought, Oh, my god, this sounds terrible. In fact, it was a Harrison joke. He’d recorded [percussionist] Ray Cooper. [He said,] ‘Play bad, I’m going to record it and send it to Phil.’ I couldn’t believe that a Beatle had actually spent that much time on a practical joke for me.”

I wore a sweater vest to work for most of the 90s. For some reason, the boss wanted us to wear either a vest or a tie.

I wonder what these guys were up to since the Wilburys were already broken up. Nice to see Dhani hanging out with mom & dad (that hat is something else). Tom looks like he has been spending lots of time at the beach.

I thought before the Georgemas festivities kick into high gear, we might spend a little time thinking about his Beatle songs. I became a Fiendish Thingy kind of late in the game, so his songs still maintain some freshness as they weren’t overly listened to and analyzed. (In fact I was so into John in the sixties, I am often amused while looking at familiar old Beatles clips that George was also there). Anyway, I’m getting ready to vote in the upcoming Forum Canon poll with a little bit different state of mind. Instead of voting by historical status/tradition, I’m going to attempt to assign rank by what I am actually currently listening to. My car’s audio system allows me to sort songs by total listens and to my surprise the top 5 Harrison songs I listen to are:

2. If I Needed Someone

Just for grins, the #1 Beatle’s song I listened to last year was I Want You (She’s So HEAVY).

These are the results for the George penned Beatle songs from the last 2 polls. Any songs that perhaps don’t come to mind right away when thinking of your favs?

Any songs you feel sorry for?

This was my #1 solo song. It edged out Run Of The Mill because I listened to it 3X last week.

^Blue Jay Way being last is a crime, I really like that song.

Shanghai Surprise, I can’t get the actual movie but here is BTS of it – probably more interesting than the actual film clip, he’s a club singer

Water (I actually really like this song, it hasn’t much musical merit but I still like it)

The Rutles of course 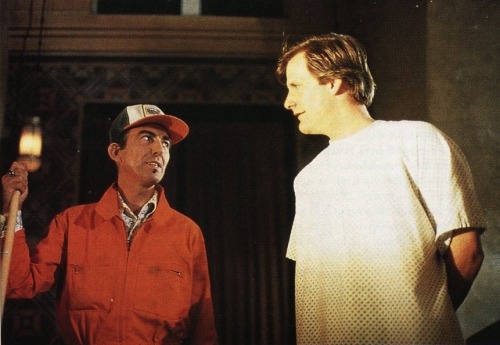 ‘Water’ is only worth watching for the benefit concert at the end, the rest of the film is awful. Bizarre to see Billy Connolly be backed by George, Ringo, Tom, Eric etc.

meanmistermustard said
‘Water’ is only worth watching for the benefit concert at the end, the rest of the film is awful. Bizarre to see Billy Connolly be backed by George, Ringo, Tom, Eric etc.

Tbf Connolly deserves a supergroup with him wherever he goes.

Better sneak this in here…

I like this video of George mingling with all of the legends of the Dylan 30th anniversary concert. Such a cool guy. And of course his performance was probably the best of the night.

Day 16 I’m gonna be basic and post Here Comes The Sun because the sun has, in fact, come out finally where I live. Praise the Lord*.

*in this context, presumably Lord Krishna. I’m not particular.

meanmistermustard said
I have a written contract (Joe makes us sign one, I insisted on the clause being added) where it is clearly stated that I will not participate in any forum meet-up held in person.

@meanmistermustard I think I found a way that you can join the get together and still maintain your anonymity. His suit is cool, but I really dig the shirt collar. I love this song and video.

If you haven’t read it, the book is life changing as well.

Day 18: in honor of Yoko’s birthday – they didn’t like each other much, it is true, but there are a few photos of them being friendly at least

Sorry Yoko and George for being so intrigued by this story. It was the first time I ever even heard the term “digestive biscuit”. Do you think George might have been buying these for Yoko during their white period? Pictures like this fill me with curiosity as to what was going on? Among other things, what were the contents of the envelope Klaus just opened? I discovered this picture while researching the Made In England album covers and inserts. (I thought I remembered a photoshoot). I wonder what condition he was attempting to heal. I do believe the transit into Pisces is in progress.

from the spirit to the skyyyy