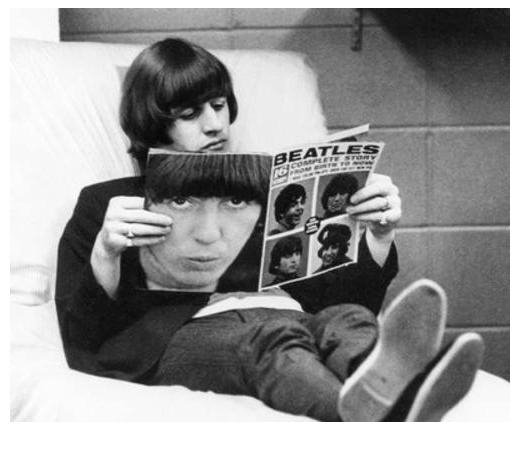 For a long time, thought it was Patti I was infatuated with.

About 20 years ago I realized it was actually Astrid

vonbontee
Inside an Apple Orchard in a Letterbox
Apple rooftop
Members
Forum Posts: 5026
Member Since:
1 December 2009

I love looking at pictures from that room. I once had the “Safe As Milk” sticker on my VW bug bumper.

HUGE Captain Beefheart fan, I am!

I wonder if John & bandmates were hip to this track from the Cap’n’s second LP, 1968 (which also belatedly featured “Safe As Milk”‘s title track): 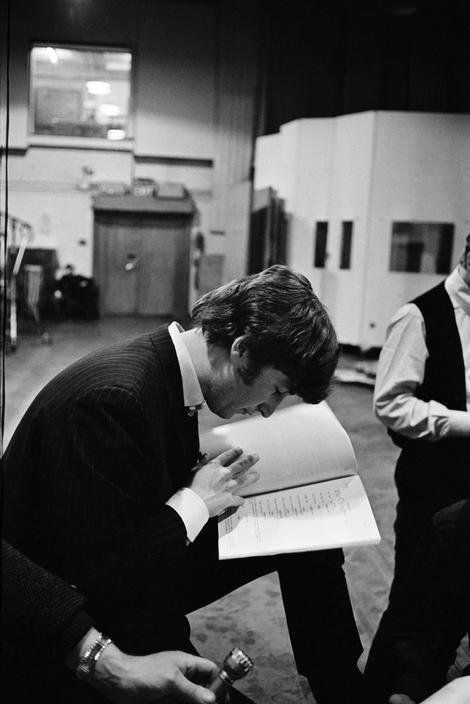 I thought that was a good subject. Quite a few pictures I’ve never seen before

Me, waiting fot the last picture and the new theme : 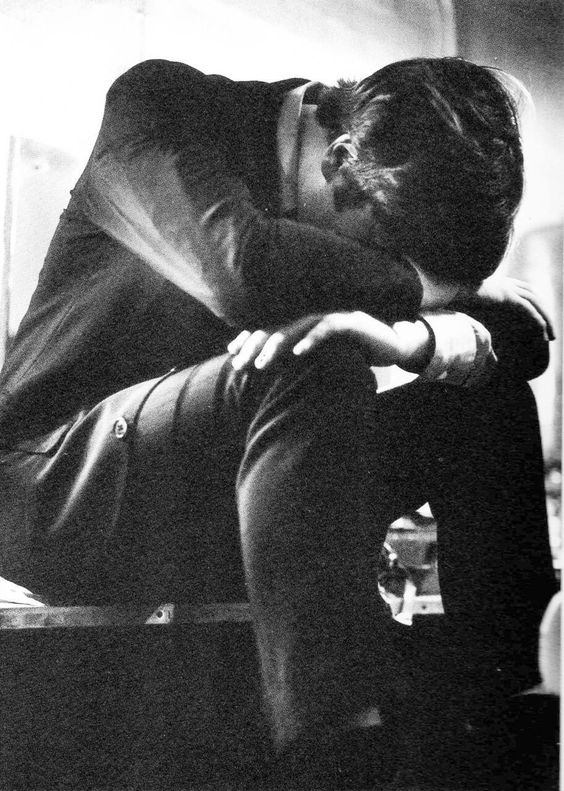 Do you have any thoughts on a new round, @Pennys Poppies?

Yes, I have one 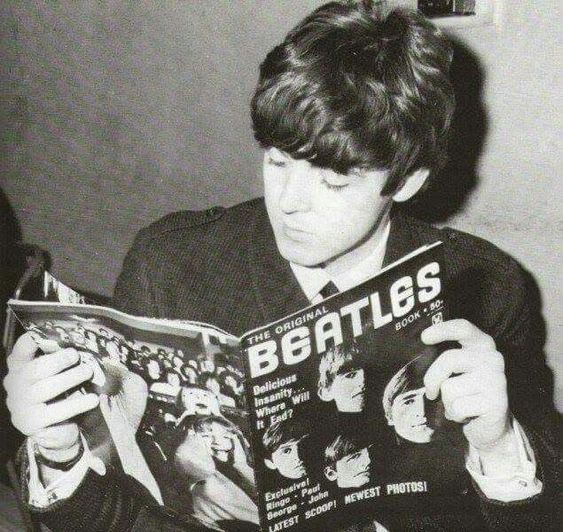 New theme :  The Beatles pictures where they are “horrid-snobby” despite them (or maybe not).

In case you aren’t familiar with the phrase “horrid-snobby”, I believe it comes from a contentious 1966 interview in Hamburg. I’ve copied the interview transcript to the spoiler and highlighted the reporter’s accusation and the Beatles response..

ABOUT THIS INTERVIEW:
On June 26th 1966 the Beatles traveled by train from Essen to Hamburg, Germany. The Beatles would give two shows in Hamburg at Ernst Merck Halle. This was the first time since January 1st 1963 that the group or any of it’s members had returned to Hamburg, the city that had played such a large role in their early development.

The press conference in Hamburg is notable for being among some of the most lame and irrelevant questions ever put to the Fab Four. The group quickly became frustrated with the quality of these questions, prompting John Lennon to say quietly to the other Beatles, “What kind of questions are these?” and asking aloud, “Anybody from the press here?” When the low quality questions continued later in the press conference, Lennon can be heard saying “Fucking hell!” quietly to the other Beatles, in his frustration.

Luckily, not all of the questions fall into this category. The Hamburg press also managed to ask the Beatles about the influence of Hamburg on their career, about their opinion of the recent controversial availability of birth control pills, and also about the infamous ‘Butcher Cover’ photo that had adorned the front covers of recalled copies of their Capitol LP “Yesterday And Today” in the States.

The following press conference was held between the two performances at Ernst Merck Halle in Hamburg, West Germany.

Following their Hamburg concerts, the Beatles would travel to the Far East for shows in Tokyo and Manila before returning to London on July 8th. Their 1966 North American Tour would begin in Chicago on August 12th.

Q: “Do you think your time in Hamburg has been important to your career?”
BEATLES: “Yes!”

PAUL: “Why? Because it was just very good, and we played a lot and it was good for us. And the people were a good audience.”

Q: “How many girls have you had here in Hamburg?”

Q: “John, what do you think of Henry Miller?”

JOHN: “Henry Miller? He’s alright. (pause, then continues jokingly) I wouldn’t go to BED with him.”

GEORGE: “He’s not as good as Henry Mancini.”

Q: “Paul, what is your opinion concerning the anti-baby pills?”

PAUL: “It’s normal, you know, isn’t it. Everyone should use it if they need to.”

Q: “George, where do you want to dance tonight?”

GEORGE: “It doesn’t matter WHERE you dance, as long as you’re dancing.”

Q: “What is the matter with Peter Sellers? What has he been doing?”

RINGO: “I don’t know what’s the matter with him. What are you saying, you know.”

Q: “Do you know the German language still?”

JOHN: (to the reporter) “You’ve had more than one! I think you’re soft.”

Q: “George, do you wear long pants in wintertime?”

Q: “Your latest record is just marvelous. But why do you start to be noisier?”

PAUL: “Well you know, I dunno… We keep changing, uhh Sir. And it just gets noisier and then it gets quieter, and it gets noisier again. You know, it’s one of those things.”

Q: “Did you choose the new Beatles sound?”

PAUL: “We don’t know what it’s going to be. It just changes record by record.”

Q: “John, somebody says you’ve stolen parts of your books.”

JOHN: “Nah, not him. Some old Italian translation book or something. I thought it was dead and buried but they found out.”

YOUNG BOY: “Ringo, if your little son says, ‘Please use a spoonful of spinach. Spooning it on your face will ensure your complexion…”

PAUL: (trying to understand the young boy’s english) Do you enjoy your complexion…?”

JOHN: (to the others) “What kind of questions are these?”

JOHN: “Anybody from the press here?”

RINGO: “You know, any questions.”

GEORGE: “Where’s all the other Chris Hutchins.”

Q: “John, when you arrived in Munich, Paul wore black dress, and you wore white dress…”

JOHN: “We never noticed, you know. It was you that was looking at us.”

Q: “Ringo, what do you think about coming back to Hamburg?”

RINGO: “What else ya want?”

Q: “What will you do tomorrow until 5 O’Clock when you are on your way?”

Q: “What do you think about your fans in Germany?”

RINGO: “They’re good, you know. They’re the same as everywhere else, only there’s more boys in Germany.”

Q: “Do you think it’s GREAT literature like James Joyce?”

Q: “Would Paul make music to go with your books?”

Q: “What do you dream of when you sleep?”

PAUL: “The same as anyone else dreams of. (laughing) Standing in your underpants.”

JOHN: “What do you think we are? What do you dream of? (quietly, to the other Beatles) Fucking hell!”

PAUL: “We dream about the same things as everyone.”

RINGO: “I just dream of everything like you do, you know. It’s all the same.”

PAUL: (excitedly) “Bill Ramsey, do I remember him? I’ve got all your records.”

BILL RAMSEY: “Why don’t you write a number for me, man?”

Q: “Paul, do you see a chance of coming back to Hamburg at a certain time?”

FEMALE: “Why are you all so horrid snobby?”

JOHN: “Because we’re not flattering you.”

(other reporters respond with a large round of applause)

Q: “Paul, do you think the new LP (Revolver ), which you’ve just released in London, will be a turning point for the Beatles?”

GEORGE: “Well, it’s a little turning point, like every LP, but you know, it’s not gonna change the whole musical world, is it.”

Q: “Paul, what do you think about your music?”

Q: “John, what do you think about this photo on the last single disc in England with the meat on your shoulder?”

JOHN: “It wasn’t on the last single. They don’t have photos on singles in England. It was a photograph on an LP in America.”

JOHN: “Yeah, but it’s not… It’s only an advertisement. It’s just us with some meat.”

JOHN: “That’s all it is. Look at it again. It’s just a picture of us with some meat. (pause) Lousy picture.”

Q: “Do you influence the Beatles when they do their records, or is it only up to George Martin?”

BRIAN EPSTEIN: “It’s not… Well, it’s up to them, the Beatles. They influence themselves.”

Q: “Have you seen in Germany that we have no real show business?”

JOHN: “Well, I don’t know, you know. We’ve only ever been to Hamburg before and there’s enough clubs there to make up for it.”

TONY BARROW: “Right, this must be the last question.”

Q: “You’re successful now for many, many years. Are you sometimes very tired about it?”

PAUL: “No, I don’t think… You know, if we were tired then we’d stop, because there’s no need to. We’ve started out wanting money like everybody else. But when you get money, you don’t HAVE to go on, you know. But we only go on ‘cuz we enjoy it. We enjoy making records and we enjoy singing, and things. That’s the only reason. And having money as well, but the other one is the main reason.”

Source: Transcribed by http://www.beatlesinterviews.org from audio copy of the press conference

Thanks for the interview transcript @sigh butterfly  ! 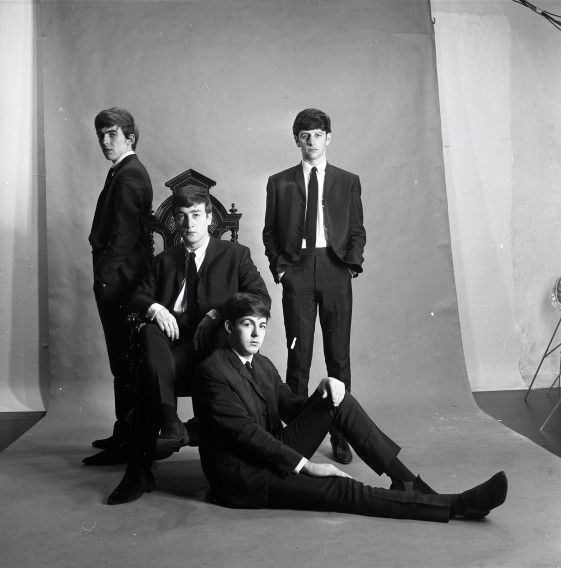 One of my favorite photo by Astrid Kirchherr !