Some are really weird and some not so, but there are some gems.

Correct me if I'm wrong, but doesn't someone or other have the picture of George with googly eyes as their avatar?

@The Hole Got Fixed said
@limitlessundyinglove?

Those are heart glasses

The Hole Got Fixed, Beatlebug, WeepingAtlasCedars

@Martha said
I found an article in the Herald Sun (http://www.heraldsun.com.au/ne.....d956b66b80 ) which says this photograph was taken in the Melbourne Town Hall sometime between the 14th and 18th of June 1964. Hope this is of any use.

Edit: Additionally, these two sources ( http://www.meetthebeatlesforre.....-hall.html )( http://www.smh.com.au/entertai.....33r80.html ) indicate that it took place during a civic reception with mayor Leo Curtis of Melbourne at which a student played the didgeridoo to them (first source, last paragraph) and both sources suggest it's been the 16th of June 1964 at which the civic reception with the mayor took place. (At least I think it would make sense that Paul tried the didgeridoo at the day it was played to him by a student since it is very unlike he returned to the town hall again on another of the four days and played the didgeridoo but didn't try itout on the first occasion)

Thanks! That was really helpful of you.

U.C.Nothing said
I'm going to try to add a handful of photos that I found interesting. They are random ones that I found from various Internet sources that I  can't recall... The pics of John and george are I believe with Jane Mansfield at Whiskey A Go Go 25th August 1964 https://www.beatlesbible.com/1.....mansfield/

The other one... could it be Litherland Town Hall??

What are they eating? Is it "english" pizza? Is it grilled cheese? What is it?!

Kinda looks like a quiche to me, but it's most likely pizza.

No way is that any type of pizza I've seen, and most of the pizza I've eaten has been "English" as a result of living most of waking hours here. A flan/quiche of some sort, possibly a cake?

What are they eating? Is it "english" pizza? Is it grilled cheese? What is it?!

@Evangeline it appears to be Australian pizza 🙂

Longer than the road that stretches out of here

They may have ate it in Australia, but I can guarantee you that isn't an Aussie pizza!

Hello. I'm trying to pin down a date for this image: 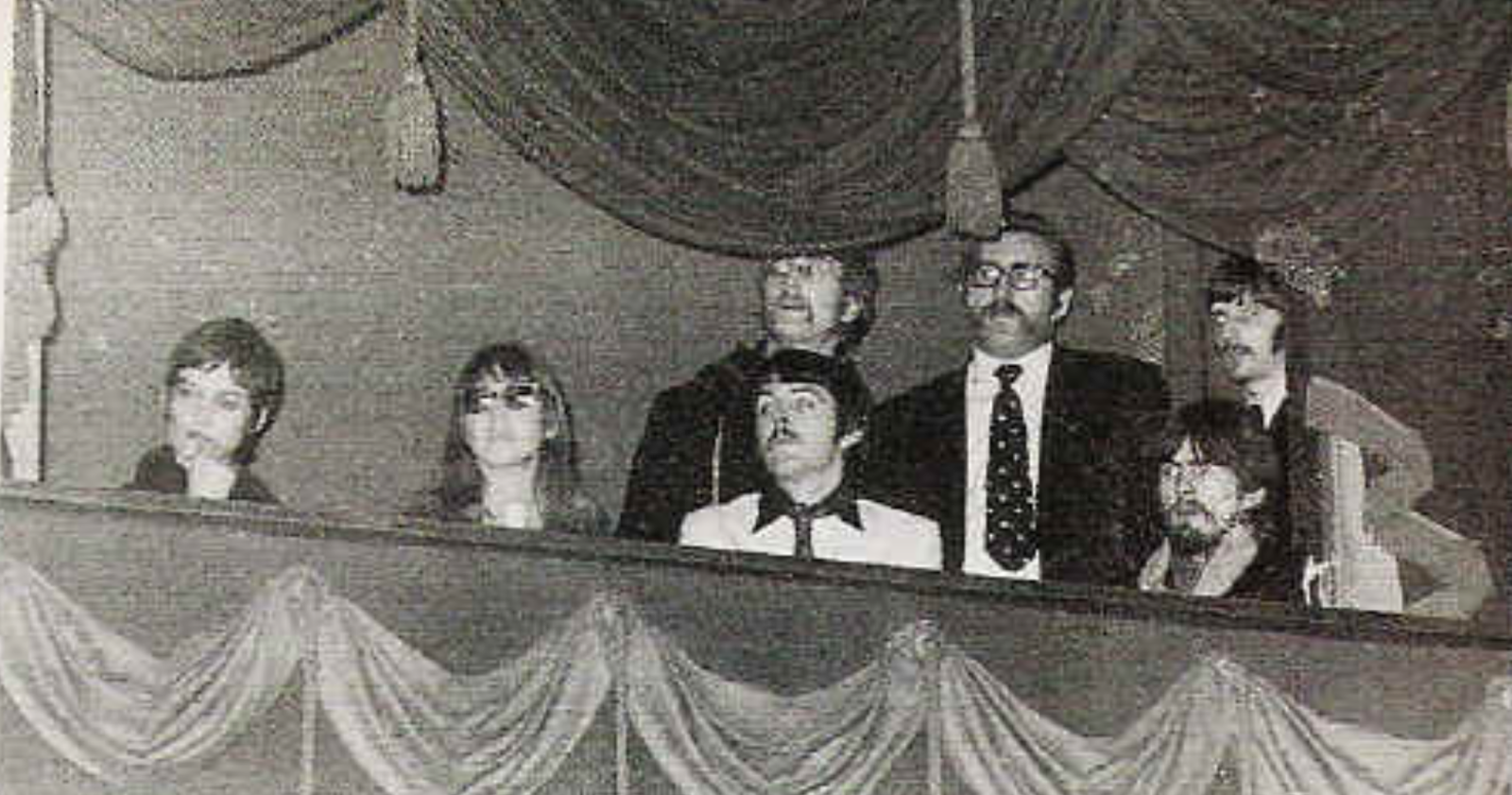 It's on loads of sites with the caption: "The Beatles watch the Jimi Hendrix Experience at their manager Brian Epstein's Saville Theatre in London's West End."

Assuming the caption is correct, when did all four Beatles see Jimi? Or is this from some other event altogether?

Barry Miles's book The Beatles Diary (not the most accurate source) has the following for 1967:

None of those entries has all four Beatles at the show.

Lots of sources on the web put the photo at 4 June, but Paul didn't have a moustache then (he shaved it off before the Sgt Pepper launch in May). He seems to have had the moustache from around November 1966 until April 1967.

The closest facial hair match for all Beatles is January and February 1967, as seen in the SFF/Penny Lane shoot (George's beard is the main clue). The photo above is definitely early in the year.

So, where and when is it from? A Hendrix show or another? Is it even the Saville Theatre? I've spent more time than I meant to on this, and I'm still nowhere near the answer! If Miles's dates are correct, I wonder if they were all at the 29 January show.

Also, bonus question: who are the two women on the left?

Maybe they didn't go to see Jimmy.
This guy's blog thinks the pic might've been taken at a different concert.

This date is speculative. I first saw this photo on the internet circa 2008. The source captioned it, "The Beatles watch The Jimi Hendrix Experience at their manager Brian Epstein's Saville Theatre in London's West End".

This photo definently fits within the Pepper era. Reports have just John and Paul attending the show on this date. On 11 January (Paul) and 13 January (Paul and Ringo) attended two Hendrix shows at The Bag O'Nails. Perhaps, by this date, Paul and Ringo had convinced the others to attend this show. However, reports also mention all four Beatles attending a Cream concert on 5 February and a Donovan concert on 24 April. Both at The Saville Theatre.

I don't know if this has any validity to it.

I think I agree with Evangeline. A lot of sources state the picture was taken on 4th of june which can't be true obviously so it doesn't seem so unlikely to me they didn't go to see Jimmy Hendrix at all on the picture. In the book That Magic Feeling (John C Winn) on page 77 it also says there were only Paul and John present on 29th of January and it also talks about the 5th of February where all four were in the Saville theatre to watch a Cream show as Evangeline's sources already mentioned. This would be more logical to me but in the end i am afraid, it is speculation, too.

The woman next to John and Paul looks like it could be Cynthia.

SgtPeppersBulldog said
The woman next to John and Paul looks like it could be Cynthia.

Thanks all. The Cream show does sound likely in terms of dates. I'll hold out for something more conclusive. I don't *think* George still had the beard in April, so it probably wasn't the Donovan show.

That said, I've been trying to find interior shots of the Savile Theatre to confirm that this was indeed from there, but couldn't find any pics of the royal box. I wonder if it's from another venue altogether.

Thought this might have some kind of relevance to the subject.

I reckon he kept the moustache for the first half of April.

But did George have his beard at that time? I don't think so, and nor does Joe.

He hasn't got his beard on the Sgt Pepper 's cover which was shot on 30 March so April would be impossible for George to still have his half-full beard.

The moustaches seem to be all over the place in 1967, but the best match seems to be for Hendrix's debut at the theatre -   Sunday January 29th January along with The Who etc. The moustaches match and George had the beard.

The June 4th show - the facial hair seems wrong for that date? Late June, around the All You Need Is Love recording Paul has no moustache and George hasn't got the beard, but for 4th June, who knows? Perhaps just two Beatles attended that show.Photo of them at Abbey Road January:

As well as for the Strawberry Fields Forever filming January 30th:

Tomorrow  belongs to those who can hear it coming.