This is my favorite guitar that George used. If you don’t know, in February of 1965, Mal Evans bought 2 1961 Sonic Blue Fender Stratocasters, one for John and George. This guitar was first used by George on the song Ticket To Ride , and is heard on the majority of Rubber Soul , Revolver , Sgt. Pepper ‘s Lonely Hearts Club Band, Magical Mystery Tour , and The Beatles, being used for such songs as You’re Going To Lose That Girl , Drive My Car , Nowhere Man , Taxman , Strawberry Fields Forever , Lucy In The Sky With Diamonds , I Am The Walrus , All You Need Is Love , Hey Jude , and Happiness Is A Warm Gun , among others. During the Sgt. Pepper release party, George got his Strat painted in it’s now famous psychedelic finish, John also did this here to his J-160E (although some claim this was when Paul painted his Rickenbacker bass into it’s MMT finish, this is false, as he is seen recording With A Little Help From My Friends with this bass in it’s psychedelic finish). Sometime in 1969, George added to his original paint finish, most notable the added bepopalula writing on the body and a painting of Eric Clapton on the headstock. During his solo career, he had other Strats, but this was his first Strat and his estate still owns it to this day. Here is George using Rocky during the Revolver sessions. I am unsure what song is being recorded or when this photo was taken, besides the spring of 1966, but I think that these photos were most likely taken on April 21st, 1966, while they recording the song Taxman . Here’s more footage. Note how John’s just sitting there, as he wasn’t present on the backing track, but since he recorded backing vocals for the song on this day, he was in the studio at the time. 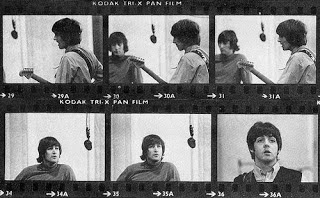 Another reel. Note that Paul has his strap on which therefore means that he is playing bass on the track. Let the photo speak for itself. It is unclear what session this was taken during, but my guess is If I Needed Someone . Here they are on November 3rd, 1965 recording Michelle (mislabeled in the article as If I Needed Someone ). Notice that both George’s Strat and Tennessean are present at the session, which therefore means either guitar could have been used on the track to play the solo, although since I don’t think he used a capo for the lead part and the Strat has a capo on it, it’s my guess that he used the Gretsch for the lead.

Here he is playing his newly finished Rocky Strat on the Our World broadcast for the song All You Need Is Love .

Here’s a photo of him miming to I Am The Walrus using this guitar, as seen on the Magical Mystery Tour film. Note the lack of bebopalula and Eric Clapton’s head on the headstock.

In this 1968 shot from The Beatles session (the page says Not Guilty , but since it’s documented that he used a Les Paul on that song, it’s safe to assume he’s playing a different song, possibly I’m So Tired ), he’s about to strum an A chord, although he oddly lacks a pick.

In this photo taken during the Let It Be sessions, you can see George bend a B note on the 4th fret of the G string. Here’s another photo from the Let It Be sessions, further proving that George’s finishing touches to Rocky weren’t implemented during January 1969. Here’s George with Rocky live, something that only happened during his solo career. This guitar is currently owned by his son Dhani as part of his estate. It even makes a cameo in Let It Be . Don’t be fooled, this is John’s Strat and therefore not Rocky.

I would love to see any additional Rocky photos, especially ones before the paint job, as the only photos of him playing Rocky before paint job were taken from behind.

I don’t know who’s cuter, Rocky or Lucy. Anyways, great post HMBeatlesfan except for a minute detail, Rocky wasn’t his main guitar during The Beatles, it was Lucy.

If you read The Beatles As Musicians by Walter Everett, you will clearly see that Rocky was the main guitar during The Beatles sessions. Although he does say Tele instead of Strat, I know he meant Strat, as he didn’t have his Tele until December 1968.

Glad to see Dhani now owns it. George Harrison would be happy I’m sure that it’s been kept in the family.

I had a go with a Fender Classic Player 60s Strat in sonic blue recently at my local guitar store and it played beautifully. I’m assuming that it’s a replica of the same model used by the Beatles and others.

I don’t have a strat but it’ll probably be the next guitar I get since it’s one of those guitars every player should own.

I wonder what songs you tried out on it, I’d recommend Nowhere Man and the rhythm guitar part of Taxman , as they both use the Fender. Also, I doubt they specifically had The Beatles in mind when making that guitar, as George’s Fender is best known with it’s psychedelic finish as seen in I Am The Walrus and All You Need Is Love , as well as photos taken while they were recording Revolution , very briefly during Let It Be (during the scene where John and George are talking), and Tom Petty’s I Won’t Back Down music video.

If you don’t own a Strat, then what guitar or guitars do you own.

Dark Overlord said
I wonder what songs you tried out on it, I’d recommend Nowhere Man and the rhythm guitar part of Taxman , as they both use the Fender.

I tried out Nowhere Man in the store since it’s one of my favourite chord progressions to play. Aside from that I was just noodling.

Dark Overlord said
If you don’t own a Strat, then what guitar or guitars do you own.

I own a Fender Classic Player Baja 60’s Telecaster (Sonic Blue) and a Epiphone Les Paul Custom (Alpine White). The guitar I mainly play is a Gretsch G5422TG Electromatic (Orange), which was released last year and plays beautifully. It’s my dads guitar though so that doesn’t really count.

I’ll probably get a Strat for my next guitar

What do guitars do you own @Dark Overlord? 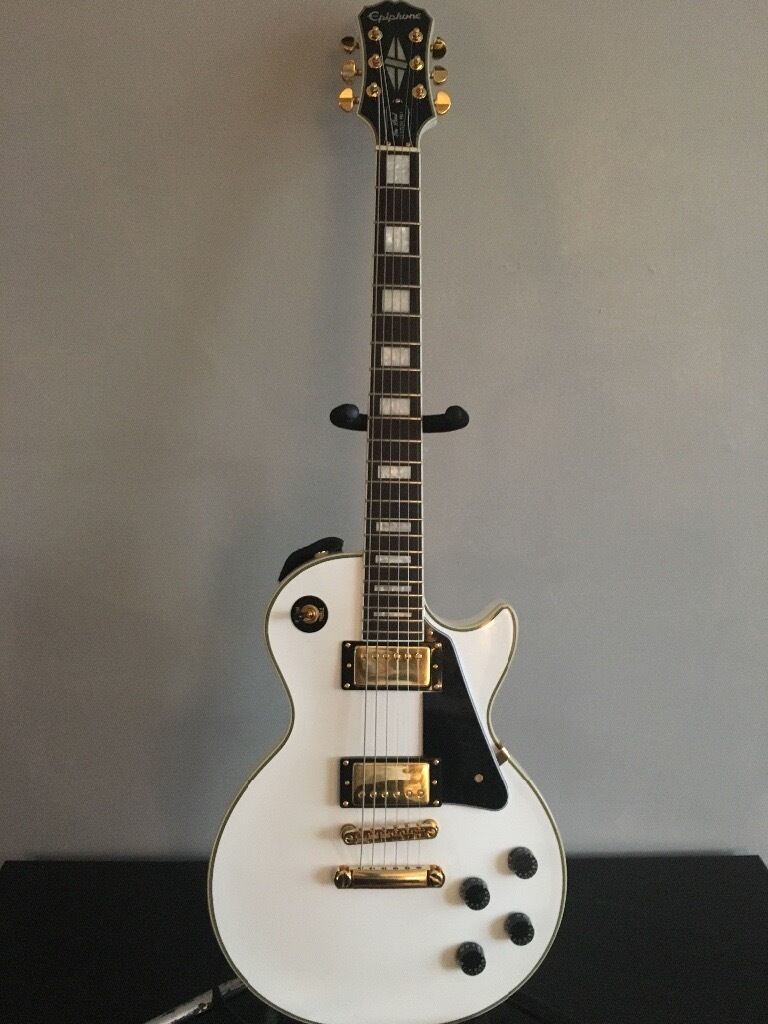 A left handed 2004 Mexican Sunburst Fender Stratocaster and a left handed Epiphone acoustic who’s headstock is held in place using wood glue and the pickguard was removed. Also, a few guitars that I plan on getting rid of soon.

Since this thread is about pictures of George’s Rocky Fender, I thought I’d show you guys this picture.

This was taken while George was recording Revolution .

Its kind of funny to see HMBeatles fan and SgtPepper63 talking to each other now that we know they are the same person.

@Flyingbrians nice Tele! I’ve got a similar one that is a deeper shade of blue. Right now it is at the drummer of my band’s house so I can’t post a picture, but it looks like this one that James Taylor is playing.

I’m personally more of a Strat person although it’s fun to use other guitars like Teles and Les Pauls.

The last photo in the original post refers to the blue Strat George played on John’s Imagine sessions as being John’s Stratocaster. This may well be the case, but I would love to hear a source for this because there is a bunch of other information surrounding this Strat.

George and John both had sonic blue Strat’s in the Beatles, but Babiuk’s book calls them “identical”, which suggests that either this is not one of those, or the neck was later changed to a maple one (or Babiuk could be mistaken, and it’s an easy mistake to make). Still, either option could mean it is John’s guitar.

Further, this guitar (which was used for slide on Imagine ) shares every physical detail except the finish colour with the Strat George used on Dick Cavett’s show (for slide) and then the Concert for Bangladesh in the couple of months after the Imagine sessions. INCLUDING THE STRAP.

I’ve covered this in more depth in an article on my blog at https://lapelcelery.wordpress……er-update/

By the time of the Cavett show (which was earlier than the Concert for Bangladesh), the Strat had been stripped to a hand-sanded finish by George personally (as related by George himself), and this was how it appeared at the Concert for Bangladesh (though it almost seems white under the stage lights closeups and the better-lit rehearsal footage shows it to be a natural, sanded finish, exactly as George says.

So it seems this guitar was either George’s or if not, perhaps gifted to him by John after the Imagine sessions. And subsequently used on the concert for Bangladesh, which is a fine pedigree for a guitar without even mentioning that George later gave it to Spike Milligan, who had it refinished in sunburst!

Still, there are 2 things to consider:

1. Sonic Blue was a very rare color on Fender guitars

2. John already had a 2nd Strat that he used live during their final UK tour (and also possibly on Revolver ), so why would he need a 3rd one

My theory would be that after Rubber Soul , John’s Sonic Blue Strat was having neck issues (same thing happened with his Rickenbacker) so he bought a black one and put the blue one away for safekeeping. Then he gave the guitar another chance during the Sgt. Pepper sessions, where he likely used it on Good Morning, Good Morning, but it was still giving him trouble so he put it back again. Then finally, he decides to get a 50’s maple neck (possibly from Eric Clapton as he was building his frankenstrat Blackie at the time) and gives it to George, who recorded How Do You Sleep? with the guitar. Once those sessions were over, John let George keep the guitar, which he sanded and used at The Concert For Bangladesh.

Those are both excellent points. That seems like a perfectly plausible scenario.