Lord of The Rings, starring The Beatles

It is interesting to think what kind of music they would have come up with.

The possibilities are endless...

By that logic, then Pete Best should've been Gollum.

Or Yoko as Gollum

In terms of The Beatles' relationship to Pete compared to Middle-Earth lore, it makes more sense for him to play Gollum.  Assuming the 4 Beatles would play the 4 hobbits (and that Ringo would be Sam), Pete is the ideal outcast trying to get back into the group, à la Gollum trying to get back his 'preciousssss.'

Lord of the rings seems complicated given the Beatles busy schedules, and lack of training as actors. My understanding, from articles I've read is that had a third Walter Shenson- Dick Lester movie been made, they were considering both a western, and I think the three or four Musketeers?

I guess Magical Mystery Tour is what happened instead. Good album, kind of a bad movie, although the new restored, higher rez MMT is ok, I mean it's the bloody Beatles! They only did five movies so I guess they are all special. 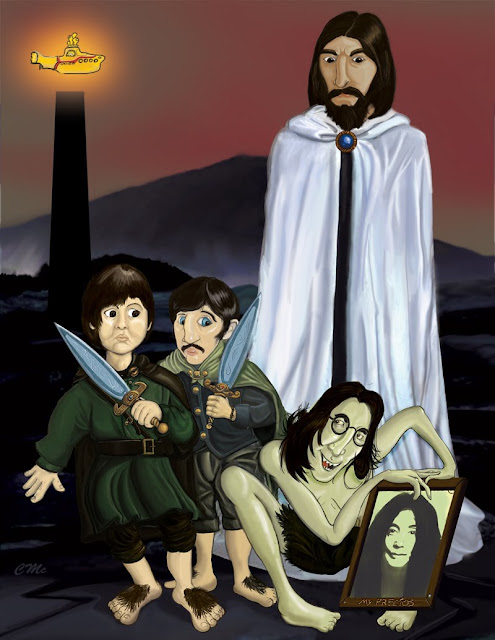 Q&A: Peter Jackson On His Middle Earth Exit, How The Beatles And Stanley Kubrick Nearly Did LOTR, And A Disguise That Let Him Haunt Comic-Con

a little bit from the article

DEADLINE: ...The reality today is, the professor J.R.R. Tolkien sold the rights to both The Hobbit and The Lord Of The Rings when he was an old man in his late 60s. They both went to UA. This was after The Beatles went after them…

DEADLINE: The Beatles?
JACKSON: Really. The Beatles once approached Stanley Kubrick to do The Lord Of The Rings. This was before Tolkien sold the rights. They approached him and he said no. I actually spoke about this with Paul McCartney . He confirmed it. I’d heard rumors that it was going to be their next film after Help . John Lennon was going to play Gollum. Paul was going to play Frodo. George Harrison was going to play Gandalf, and Ringo Starr was going to play Sam. And a lot of other people were going to play other roles. Paul was very gracious; he said, ‘It was a good job we never made ours because then you wouldn't have made yours and it was great to see yours.’ I said, ‘It’s the songs I feel badly about; you guys would have banged out a few good tunes for this. You were The Beatles, after all. It’s a shame we missed out.’ Tolkien sold the rights to UA in 1968 or ’69, the only work of his he sold.

Another news story about this:
http://www.dailystar.co.uk/gos.....-the-Rings

I was aware at the time………It was mentioned in various places…..'The Beatles Monthly' for sure.

As a fan of the group and the book I was glad they didn't take it on, it isn't a fit. TLOTR had an almost spiritual effect on us hippies. Tolkien took it even more seriously than that.

I know that much later Paul had an interest in making, Roald Dahl's 'Danny The Champion of The World' he's such a great dad himself it's a pity that idea didn't float.

I looked through the forums, and I found that there wasn't a thread on the Lord of the Rings film starring the film and directed by Stanley Kubrick that didn't happen. That, like, really surprises me. Anyways, do you guys think it would be good or not?

For me, personally, I think it'd be good. Stanley Kubrick is an excellent director and could totally make the scale of Middle Earth on the big screen, even though it's the 60's. The Beatles would also be pretty good. Paul is totally Frodo, Ringo is definitely Sam and George is definitely Gandalf. I don't think John would be good as Gollum, though... I think that was the main problem. Maybe he'd be a good Gandalf? (But to be honest, all of them except for Ringo would be a great Gandalf.) Anyways, I think the Beatles would have good enough of banter-ish dialogue for the Lord of the Rings. I can totally see it. The books also had a huge hippie following back in those times, which also works well with them. Another thing that'd be cool is if they made it sorta trippy like Yellow Submarine . Or a soundtrack based on Beatles music. The soundtrack wouldn't really work if it was like a musical, though. I'd say more if it's in the background or while they're traveling and stuff. If it was a musical, that'd also be a problem. ....and if it was focused on the Beatles aspect and no the Lord of the Rings aspect...

I finally finished Sgt. Pepper 2! Watch it here. (Sorry if this is annoying advertizing...)

I'm not sure if the Beatles would like Kubrick's style of directing.

Annadog40 said
I'm not sure if the Beatles would like Kubrick's style of directing.

True. Kubrick in the set is like Paul is in the studio. And you know how much the Beatles loved how Paul was in the studio... I still think it could have worked well, though.

I finally finished Sgt. Pepper 2! Watch it here. (Sorry if this is annoying advertizing...)

Wasnt Kubrick not that keen on working with the Beatles when asked later? Tolkien said no anyway but i thought Kubrick wasn't up for it either.

But then parts of some Kubrick film was used during the 'Flying ' segment of the 'Magical Mystery Tour ' film so i may very well be typing garbage.

Kubrick said it was "unfilmable". A correct assessment, given the technology of the time, in my opinion. But there is also the story that Tolkien blocked it.

Had they made it though, without major changes to the story of the books, had they each played the roles rumoured, it would have made for a very strange "Beatles" film.

The four characters involve three separate storylines. And when I saw separate, I mean apart. There would barely be a scene with all four of them in had it stayed true to the book.

And, been a while since read or watched, and I could be wrong about Gandalf being around one time Gollum was caught. Otherwise you have different storylines running concurrently - Frodo and Samwise (Paul and Ringo), Gandalf (George), and Gollum (John) - where three characters stories converge for periods.

I believe it would have been a car crash.

"I believe it would have been a car crash."

Or maybe a trainwreck - I imagine something much worse than a car crash; unless it was one of those 100-odd vehicle things that happens in fog sometimes.

I would watch it for the laugh.

Annadog40 said
I would watch it for the laugh.

It would have spoilt two great cultural phenomenons ............ They wouldn't have been added together.........rather one would have been subtracted from the other.

I'd give my eye teeth to see this movie.

Annadog40 said
I'd give my eye teeth to see this movie.

I was thinking how funny that expression is and how people will offer bits of themselves for something they want so bad...... 'their right arms, their last penny, their firstborn, their shirts, their last drop of heart’s blood, even their lives and immortal souls.'

But you look better with all your teeth Anna.

parlance said
It is interesting to think what kind of music they would have come up with.

Or they could just adapt the songs that are in the book since the chars sing a lot.