walrusgumboot said
I found a couple LIB DVD’s on ebay….

I’ve said it before, I’ll say it again this is one great site to get Beatles DVD/Blu Ray’s

Your wish has come true

mjb said
It would definately be great if they cleaned up the soundtrack. Saying that, I take it the sound was captured on the movie soundtrack so would only be in two track stereo?

mjb said
It would definately be great if they cleaned up the soundtrack and did it in 5.1 surround. Saying that, I take it the sound was captured on the movie soundtrack so would only be in two track stereo?

The two Nagra machines on which the film soundtrack was recorded were mono recorders which (apart from the first day) shared a single input.  Once they started recording at Apple Studios, they were recording on both the Nagras and the multitrack desk which George Martin had arranged from EMI, so all that recording has multitrack masters and could be mixed to 5.1.  Any stereo mixing for the Twickenham stuff (whether 5.1 or simple two-channel stereo) would, of necessity, involve artificial separation of stereo elements.

Stand back and be prepared for a shock.

‘Let It Be ‘ is not coming out on DVD this year.

In a recent birthday interview with Access Hollywood*, Ringo was asked a question which we at WogBlog are very interested in: Is the “Let It Be ” movie ever going to see the light of day? Ringo had this to say:
“Well, it’ll see the light of day, everything sees the light of day, you know. And … yeah I’m sure it will come out, it’s not planned for this year. But yeah, it’ll be out”.

*The interview is in the video contained in the spoiler at the 4:48 mark.

In my opinion Ringo sounds as unconvincing as you can get when he says “yeah, it’ll be out“.

And as someone pointed out elsewhere on the net its incredibly unlikely to be out next year as The Beatles Live thingie is scheduled to be released – unless its part of it (the rooftop concert linking them together).

Additionally 2017 very well could see Apple go for some 50th Pepper release instead (they marked the 25th anniversary with the ‘Making of’ documentary and its 20th was heavily involved in the ’87 cd releases) and so it becomes 2018 at the earliest. After that you’re only 2 years away from its 50th birthday in 2020 so why not wait.

Basically there is always an excuse Apple will find to never put it out.

Just watching a REVOLVER video release of the 1993 restoration………

Found myself really paying attention for once.

Great to see them having fun and coming together for a performance when it mattered. I mean the way they dealt with their instruments being turned off without missing a beat. I’ve seen this so many times before but failed to appreciate their consummate professionalism. All those nights in Hamburg and it’s distractions paid-off.

Also kudos to them for not giving a monkeys about how they looked. John and Ringo wearing their wive’s coats……..Can you imagine any other band giving their first performance in years and paying so little attention to wardrobe?

It did cross my mind seeing Maureen sitting next to Yoko and Pattie on her way up…………What would have happened if the other Beatles had said, ‘right John’s got his here why not have our wives in the studio too? And while we’re at it let’s encourage them to chip in ideas about John’s songs”…….. Even if it didn’t resolve the situation and lengthen their time together maybe John would have understood the other three’s point of view a little more sympathetically..

Coincidentally it’s When I’m Sixty-Four – so they should give me a commemorative boxed set for my Birthday .

The only bits of the film I’ve seen are the clips that were used in the Anthology.  I’d love to see it.  I understand it could be difficult to watch because of the tensions but I imagine it’s fascinating to see.  I do wish they would bring it out on DVD, I don’t really understand why it’s been blocked.  Surely any Beatle fan knows that it’s very ‘warts and all’.  I guess Paul and Ringo don’t want it to put off a new generation of Beatles fans, so maybe I’ve answered my own question there.

It would have been interesting if they’d followed up one of the other proposed ideas for the live concert, the ampitheatre especially.

Anyway, the rooftop gig still looked like it was great and it was the reason I dragged my family round to Saville Row when we took a trip to London 🙂

It’s a very strange, dislocated film, there are weird edits and cutaways, most frustratingly during the rooftop gig where really noone cares about the reactions of the locals, you just want to watch the rooftop gig itself. I often wonder whether there were other angles and full footage, surely if nothing else that would be releaseable.

Lots of interesting glimpses into the Beatles individually and together in various scenes “backstage” while rehearsing, etc.

Some scenes or moments I remember that stuck in my mind:

2) Paul along with George and Ringo (John absent at that point) rehearsing “The Long And Winding Road ” in a comical way with the tempo speeded up — you can tell George and Ringo are enjoying this way of poking fun at the song, then Paul at a certain point stops the fun and says (to paraphrase): “Okay, laddies, let’s get serious now…!”  It was like George and Ringo were having TOO much fun, at Paul’s expense…

3) Paul is rehearsing some song with George (can’t remember which one) and Paul is stopping George about 100 times, telling him over and over again that he’s not QUITE doing a certain guitar lick right — all the while George is patiently listening and trying to do it right.  Hmmm… seeds of future resentments…?

4) Paul (with Linda and their little daughter in tow) arrives in London a bit late in the morning at the studio where everybody is already sitting around waiting and talking.  Paul immediately goes all around the room, individually saying hello to everyone.  I thought that was interesting that he would be so consciously social like that, rather than just waving his hand and saying hello to everyone in a general way.  Meanwhile, his little daughter (Mary?) has crawled over to where Ringo is sitting at a drumset, and Ringo has picked her up and is letting her play with the cymbals (I think she’s even holding a stick).  A little later, she has crawled elsewhere, and we see Paul and the little girl having a moment together, sort of playfully and intimately just having nonsensical fun.  Then Paul needed to get serious because it was time to start getting everyone together for rehearsals — and what I found fascinating is that all Paul had to do was subtly change his demeanor and the little girl instantly recognized that she had to behave and quiet down now.

5) Paul and the other three taking a break from the normal list of songs to do a rendition of “Besame Mucho ” with Paul affecting a comically operatic voice — and quite good.

6) Their rehearsal of “Two Of Us ” which — by the unspoken warmth and looks between John and Paul made me think that song was always about the two of them and their friendship (only recently I’ve heard here at BB that the song is supposed to be about Paul and Linda?).

Anyway, some of the details in my memory as recounted above may be inaccurate — I’ve been known to misremember the past before…!

Makes me laugh every single time.

That and @Pineapple Records that little girl was Heather, Linda’s child from her first marriage.

Ah, Heather… thanks AppleScruffJunior.  That George shock video is funny — I have a feeling that the second time he’s shocked he wasn’t really shocked, but he had that spasm of flinching only because of the sudden feedback sound making him think it happened again, because he was already obviously spooked about being shocked the first time.

Haven’t seen the film in years but when Heather is with Ringo doesn’t she hit one of the cymbals or drums and Ringo goes all cute and looks shocked. Thats what i remember anyway and it is so damn adorable.

Another highlight to add to Pineapple’s great list is Ringo and George working on ‘Octopus’s Garden ‘.

Here’s the film if anyone wants to watch it.

meanmistermustard said
Another highlight to add to Pineapple’s great list is Ringo and George working on ‘Octopus’s Garden ‘.

This is a distinct memory for me also, figuring out the melody on the piano and how nice it was to see George helping Ringo out. No wonder George had such a good input to the finished song. Another good George bit is doing For You Blue when they moved to the basement of Savile Row. These days if such a documentary had been made, we’d have understood why they moved to Apple, and why Preston is there, but that wasn’t the point of the original.

It wouldnt surprise me in the slightest if in 2070 when it finally gets an official release there will be the original film and a newly created Apple edit that better documents the period, certainly to Apple’s preference. 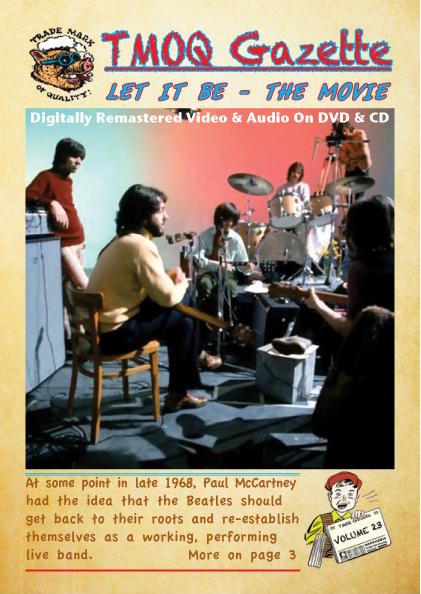 Did you really expect Apple to release it? Really!?

meanmistermustard said
‘Let It Be ‘ is being released on DVD in 2016.

Did you really expect Apple to release it? Really!?

I shall have to censor the words I would have used against you because you’re a sound lad and I don’t want you to dislike me but here is my rant:

mmm you *beep*. I saw this and I thought, oh my *beeping* lord, they’ve finally done something good. But you and your *beeping* hiding *beeping* spoilers which don’t show up when you wave your mouse over them on the menu made me think that they were actually releasing the *beeping* DVD that I need to finish off my Beatles movie collection. You *beep*!

Let It Be already released on Blu Ray

Pirate copies, whether on 36mm, video, DVD or Blu-Ray do not constitute an official release, and so I would say it isn’t available legally on any format at the moment, and hasn’t been since a short-lived video release.