A couple of things coming up on BBC Radios 2 and 4 next week, one documentary, one play. 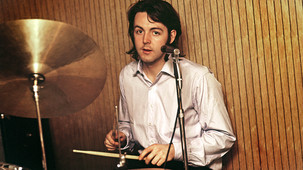 Let It Be – 40th Anniversary: http://www.bbc.co.uk/programmes/b00sgzzz

To mark the 40th anniversary of the release of Let It Be , and the accompanying Academy Award-winning film (both released in May 1970), Guy Garvey tells the story of the fractious and often bitter sessions that documented the demise of The Beatles.

Featuring contributions from many of those who worked on the Let It Be sessions, including director Michael Lindsay-Hogg, engineer Alan Parsons, photographer Ethan Russell, author Richard DiLello and engineers Dave Harries and Brian Gibson, this programme explains how a project (originally a TV documentary, titled Get Back , which was designed to re-energise the band and capture their stripped down rock’n’roll roots), instead documented power struggles, bickering and conflict.

The project was perhaps doomed from the start. Paul McCartney ‘s original suggestion was for the group to play three shows, which he hoped would refocus and invigorate the band after the tensions experienced during the recording of the White Album . When this plan failed to materialise, the idea evolved into a worldwide broadcast of a live concert.

Paul decided that the rehearsals should be filmed for a documentary that would promote the live broadcast and they began at Twickenham Studios on 2 January 1969. Everyone involved in the rehearsals considered them to be disastrous. Harrison was increasingly resentful because he felt his songs were either derided or ignored; Paul’s attempts to hold the band together and rally spirits came across as controlling; John had all but withdrawn creatively, seldom contributing even to the arrangements of his own songs; and Yoko Ono – who often spoke on John’s behalf as he sat silently by – was a major source of tension.

The intrusive film cameras and the cold, unfamiliar settings of Twickenham Studios contributed to the ill feeling. Fed up with John’s creative and communicative disengagement, George announced that he was leaving the band. He went to Eric Clapton’s house, where he wrote Here Comes The Sun , but within a few days he was persuaded to return to the group.

After three weeks of filming, the band were still unable to agree on a location for the proposed concert, so Michael Lindsay-Hogg suggested they stage an impromptu performance on the rooftop of their Apple headquarters. The live performance took place on 30 January in front of a small audience of friends and employees but it was short by the police after complaints about noise. Filming continued the following day and then no further work was carried out on the project until March, when John and Paul called engineer Glyn Johns to EMI and offered him free rein to produce an album from the recordings.

John booked time at Olympic Studios to mix the album and presented it to the group at the end of May. Originally intended for release in July 1969, it was pushed back to September, to coincide with the TV special and film about the making of the album, and then further delayed because the band decided to release Abbey Road instead.

On 15 December, Glyn Johns was approached again, but this time with the instruction that the songs must match those included in the [as yet unreleased] film. New mixes were prepared but once again rejected. Then in March 1970 the session tapes were given to American producer Phil Spector, who worked on the tracks and compiled Let It Be . By the time the album and the film with the same name were finally released on 8 May 1970, the Beatles had broken up.

The play draws together fragments of reportage from the time, interviews with Lennon himself, the true story of Sam Leach, the Beatles’ first promoter, some of the greatest music of the twentieth century, with the fictional stories of two lost young people whose lives were transformed by the concert, and Liverpool’s own Billy Butler, recreating his earlier self, to create a joyous celebration of life, music and community.

I don’t know much more about this one, but it sounds interesting. Sam Leach was one of The Beatles’ early promoters/managers in the early 1960s, before Brian Epstein. These events are set in December 1980, though, many years later.

I’m listening to the Let It Be documentary right now. It’s good – and available for six more days.

Sean Ono Lennon will interview Paul McCartney, Elton John and his half-brother Julian for an upcoming BBC radio special marking what would have been John Lennon’s 80th birthday, October 9th.

John Lennon at 80 will broadcast in two one-hour installments, October 3rd and 4th, at 9 p.m. BST/4 p.m. EST on BBC Radio 2. According to UDiscoverMusic, Radio 2 will pair these shows with a two-hour special, John Lennon at the BBC, featuring a mix of archival performances and interviews, that will air October 4th between 7 p.m. and 9 p.m. BST/2 p.m. and 4 p.m. EST.

“John Lennon is one of the Radio 2 audience’s most popular and best loved musicians,” BBC Radio 2 head of station, Helen Thomas, said.” So we’re thrilled and honored that Sean’s first-ever radio program in which he talks at length about his father, alongside his brother Julian, Paul McCartney and Elton John, will be broadcast on our network.”

Per a preview of John Lennon at 80, Sean’s conversation with McCartney will cover everything from meeting and becoming friends with Lennon to the Beatles’ Let It Be  sessions, and how previously unseen footage from Peter Jackson’s upcoming documentary changed McCartney’s perception of that period. McCartney will also discuss his and Lennon’s artistic development together, and perform a snippet of the first song they wrote, “Just Fun.

In his conversation with Elton John — who is Sean’s godfather — the musician will share his own memories of being a Beatles fan, like biking eight miles to buy a copy of Sgt. Pepper ’s. John also talks about Lennon’s final live appearance, which happened to take place at one of his 1974 gigs at Madison Square Garden, where Lennon was reunited with Yoko Ono.

And with his half-brother Julian, the two Lennon boys will discuss their father’s life and music, with a particular focus on his final album, Double Fantasy  (some of Sean’s earliest memories are of being in the studio with his dad while he made that record). The pair will also discuss the unique moments they realized exactly who their dad was, with Julian recalling memories of fans lingering outside his childhood home in England, and Sean recounting similar scenes outside the Dakota in New York.

Here is the link to BBC Radio 2, @sigh butterfly

The only news I listen to is BBC Radio 4.. Don’t worry…i get all the U.S. news I need from them. I get my local news from TV and the newspaper.

Thanks @Ahhh Girl, I’ll check it out!

Part 1 of the show was excellent. @sigh butterfly and all

Thanks @Ahhh Girl, I’m saving the broadcasts for his birthday. I usually have sad feelings on that day, so I’m hoping it helps me to fight off the blues with some positive vibes.

I loved the first part of Lennon at 80! I won’t give anything away, but the Sean and Julian interview in particular is so good, I found it quite emotional tbh.

Sean’s conversation with Paul is one of the most open reflections I ever have heard him give when remembering his friend, very moving.

That was a very thoughtful broadcast in John’s memory. Thank you Sean for pulling it together

. A few times I realized I was floating up stream filled with remembrances of my own.