As much as i hate Trump, i'm glad that he did this for 2 reasons:

1. What's going on in Turkey isn't our problem and while i have no problem helping out in foreign affairs by supplying people with food, shelter, education, and healthcare, the military should only be there to protect it's native land from invaders.

2. By keeping troops there, we're only stalling the inevitable. A perfect example of this is our involvement in the Vietnam war where we tried to combat the Vietcong for over 10 years until they finally invaded Saigon.

The way I see it is that they never should have gotten involved in the first place, but now that they are involved, they should be responsible about what impact their absence will have, and plan their exit accordingly. Getting out of Syria may be the right thing to do in the long run but in the short term it will create a power vacuum and possibly prevent the Kurds from ever achieving autonomy, whether that would be through the continuing of the Rojava experiment or through establishing a nation state.

Also, what they've done in Rojava is a role model for what can be achieved not only in the Middle East but all around the world, since all their policies are strongly feminist, secular and environmental. These are causes many people thought could never be successful in that part of the world, but somehow they've actually been pretty successful.

Ron Nasty said
So, it appears that Boris has got himself a Brexit deal, though whether he can get it through the House of Commons when they sit on Saturday (the first Saturday sitting since the Falklands War in 1982) is still a big question.

At last year's Conservative Party Conference, before he became Prime Minister, he railed against the idea of a customs and regulatory border in the Irish Sea between Northern Ireland and the rest of the UK, condemning the idea and saying no Conservative leader would ever, could ever, go down that road to get rid of the backstop.

So, how has Boris got rid of the backstop? He's gone for a customs and regulatory border in the Irish Sea between Northern Ireland and the rest of the UK.

The DUP (Democratic Unionist Party), whose 10 votes will be essential to Boris and his minority Government getting his deal through Parliament, have already said that they cannot support the deal as it stands. It's not known how the ERG (European Research Group) Conservatives always cited the lack of DUP support when voting against Prime Minister May's deal.

It's going to be an interesting few days.

I wasn't expecting that! Not that it makes any difference anyway, considering it almost definitely won't get through...

Turkey and Syria... this can really only end one way I think - the cleansing of the 2 million Kurds in Syria and possibly any number of the remaining 33 million in the adjacent countries...

Hmmm, bets on when Turkey will be allowed into the EU?

Apparently, Turkey have agreed to a ceasefire, which is good, but I worry that even if the Kurds do manage to escape genocide, they'll still lose their liberty and autonomy.

Today is a rather historic day which sees in two major social changes in Northern Ireland, much to the disdain of the DUP and some other religious Unionists.

Stormont hasn't sat for over two-and-a-half years because of disagreements between the DUP and Sein Fein, many of them on social issues such as abortion and same-sex marriage.

A Labour back-bencher, Stella Creasy, got a Private Members Bill through Parliament meaning that, if Stormont was not sitting again by today, for them to set the rules in Northern Ireland in light of the judgement of the Northern Ireland Supreme Court, then the Westminster United Kingdom Government would make abortion and same-sex marriage legal in Northern Ireland, bringing in services to provide them be February 2020, at midnight.

The DUP and other religious groups attempted a session of Stormont today. They did not have the necessary quorum to elect a Speaker, so falling at the first hurdle.

At midnight tonight, abortion and same-sex marriage become legal in Northern Ireland, and unless Stormont is sitting by February 2020, in which case they can take over the process, Westminster will put in place those services, giving equal access to the citizens of Northern Ireland to what is normal in the rest of the United Kingdom that the DUP so want to be a part of.

QuarryMan, The Hole Got Fixed, ScarlettFieldsForever

RN you're misunderstanding it. The DUP want to be part of the UK but not that part. Like they're British but not that British.

Now they're just like the filthy Taigs with access to safe abortions and allowing the :O gay and lesbian couples to get married, sweet Jesus, what has the world come to!

Apparently, Donald Trump wants federal agencies to cancel their subscription to news sources that says bad things about him.

I'm so glad that most Trump supporters are pro-free speech because if they weren't, Trump would probably be pestering congress about repealing the 1st amendment or at the very least putting in ridiculous clauses that prosecutes those who criticize him.

There's a huge contradiction in the attitudes of Trump and his ilk in regards to free speech. On the one hand, they support the free market, meaning that companies are allowed to pretty much do what they like without interference from government. This means that in the case of the baker refusing to bake a cake for the gay couple, they support the baker. Yet when it comes to private companies acting (you would think) within their rights to criticise Trump or whatnot, suddenly the Republicans are in favour of using government authority to restrict them.

That's US politics for you, they'll say they're for free speech until you criticize them.

Unfortunately, it works in Trump's favor. By supporting the free market, Trump can deregulate any regulations that have hindered his business in the past. And by opposing criticism of him, he can distort the media to get more people (particularly Republicans) to favor him by calling his criticism "fake news" (ironically coming from a guy who was friends with Alex Jones).

Why is this thread only ever used for political news?

A good point. The thread title influences it a bit, probably. It's not 'Here Comes The Sun - current world events'

I wouldn't say that's entirely true for the whole thread, @50yearslate, but I would agree that this thread leans heavily toward the tougher end of what's happening in the news, and that often involves a political dimension, while many of the straightforward good news stories tend to end up in "Happiness is nice thread".

The Hole Got Fixed, 50yearslate

I think it's because the news itself is typically political nowadays for a few reasons. First, controversial stories grab your attention way better than non-controversial ones but most importantly, society gets offended and tend overreact much more than we used to. Something as simple as inviting a girl over for coffee can become a hot topic that grabs the attention of celebrities and divide a community.

In some good news (for us Brits anyway) the England rugby team have beaten the three times defending champions, the New Zealand All Blacks, 19-7. This has got them to the final for the first time in 12 years. Pretty impressive!

My state is burning to the ground as we speak.

I thought this year’s fires were a bit late in coming, but unfortunately they’ve arrived- in this case, late is very much not better than never.

50yearslate said
Why is this thread only ever used for political news?

I'm gonna be honest I avoid both this thread and the Philosophy thread because I feel like every time I go on there if find novels of political debates I don't care to read.  The only reason I visited this thread is because I'm half asleep browsing the forum and didn't realize what thread I was reading and happened to read the above post.  I also don't know why I'm posting this...maybe that too is a side effect of my half asleepness.

^ I definitely get that. Once we get into a discussion, we do tend to go for quite a while 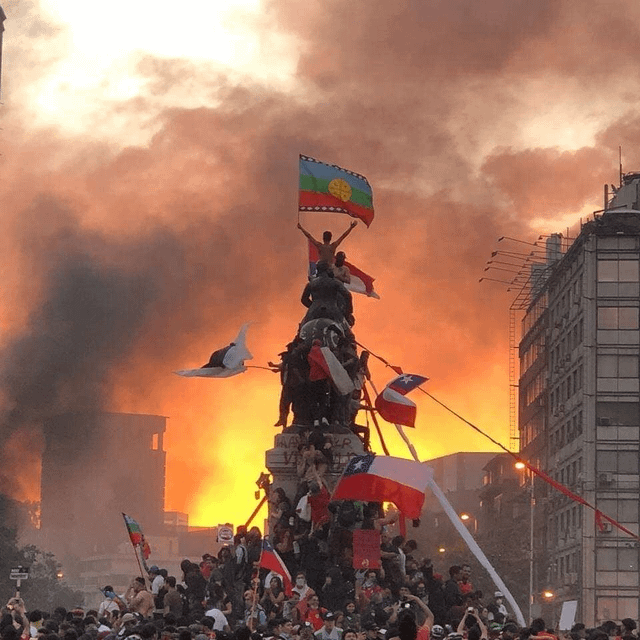 The protests in Chile are getting pretty intense as you can see in possibly the most awesome photo taken this decade. Credit to @ su_fidalgo on instagram.

^^^wow. I agree that's probably the most awesome photo this decade - and who knows, perhaps it'll turn out to be one of the most defining too...

I've got a Chilean friend at school - she's got family there and is getting a little worried about them from what I gather... and I can understand that completely!

Definitely. Even as the evil socialist in me is happy that people are protesting and making their presence known, deep down I know that these sorts of thing mostly end up hurting ordinary people more than anyone else. Apparently the Santiago subways are down, and that is probably hurting the livelihoods of many working people.