Hello everybody. Welcome to Dylan Tuesday, an idea borrowed from @Expert Textpert. Here is the place to celebrate Bob Dylan on Tuesdays with images, songs, performances, quotes, or just thoughts about the man. Hopefully enough people are big enough fans to merit the making of this thread. Here is my favorite Zimmerman picture, seen here to the right of Brian Wilson.

I like Bob’s take on modern-day (2006) record making: “You listen to these modern recordings, they’re atrocious, they have sound all over them!”

Most recently I’ve gotten into the song Most Likely You Go Your Way and I’ll Go Mine from the Blonde on Blonde album. It has encouraged me to start delving deeper into Dylan past the odd few popular songs and the Travelling Wilburys, which I’m sure will be an amazing trip! My only concern so far is I don’t know what kind of look he was going for in 2003… 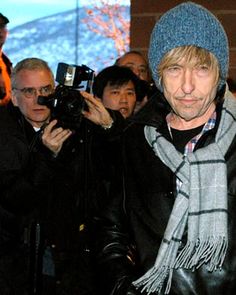 Never too much blonde with Dylan. That one time he went Blonde On Blonde it worked out pretty well.

Happy Dylan Tuesday! Here is a photo of Bob working on some of his famous steel sculptures.

Happy Dylan Tuesday! Here’s a photo of Bob next to a hotel with advertisement for a *cough* licensed betting office. I think I’ll celebrate this Tuesday by listening to Triplicate and a few different versions of my favourite Dylan song Leopard-skin Pill-box Hat.

Currently loving the song The Mighty Quinn/Quinn The Eskimo – well, Manfred Mann’s version, to be more precise, but I admire Dylan’s charming and clever wordplay in the lyrics!

On @Martha’s contribution, the picture was taken in the UK during the 1966 tour (possibly 1965), L-S-D was the UK pre-decimal equivalent of the current £ and p symbols, representing “pounds, shillings, pence” based on the Latin “librae, soldi, denarii”.

Bob’s Nobel Prize acceptance speech from earlier this year, which he recorded with a little instrumentation, avoiding having to give it in person. It’s an interesting rumination on the nature and roots of his creativity:

For today, i’ll post a good piece of Dylan/Beatles trivia.

What do the two songs Strawberry Fields Forever and Hurricane have in common that no other Dylan or Beatles songs have?