Was thinking about the working titles the Beatles had for their records, and it’s occurred to me: had these original ideas gone ahead, the visual and general style of the albums might have been altered quite drastically.

Had Revolver been “Abracadabra” or “Magic Circle”, would we have seen the Beatles in some kind of surreal or mystical display, or might they still have used Klaus’s artwork? “Beatles on Safari” might, in a worst case scenario, have depicted them in some kind of goofy jungle-based situation; bearing in mind that they were still trying to escape the moptop image at this point, it seems very unlikely and would hardly have reflected the more ambitious and experimental music contained within. “Fat Man and Bobby” and “Four Sides of the Circle” were luckily vetoed, the former being bizarre and the latter pretentious.

“A Doll’s House” for the White Album has always seemed rather fitting to me; a doll’s house having many little compartments, a bold statement of grandeur made up by lots of small, diverse, childlike oddities. That said, the way that the white record cover slyly and almost eerily betrays nothing at all about the album’s contents is absolutely genius as well.

Apparently according to Mal Evans’s diary, one of Abbey Road ‘s working titles was “All Good Children Go To Heaven”… I wonder what they would have done for that cover…

The Beatles wanted the album Abbey Road to be called Everest, and take pictures of themselves on Mount Everest. Then, they looked outside and thought it would be easier to take their picture on Abbey Road .

And ‘Everest’ was because it was the brand of a pack of cigarettes sitting on the mixing board, I do believe.

…which belonged to Geoff Emerick.

It is a cool design, but I ultimately prefer Voorman’s Revolver cover. This seems a little too much like a ‘Stones cover to me.

As for others, I think that this is just a bootleg, but I’ve seen this floating around…

As we know, that was the working title to Help !

Seems a bit anachronistic for ’65, but it was still early enough that I think they could’ve gotten away with it. God only knows what “Eight Arms To Hold You” would’ve sounded like…

And of course, probably the most well known and relevant to your OP… 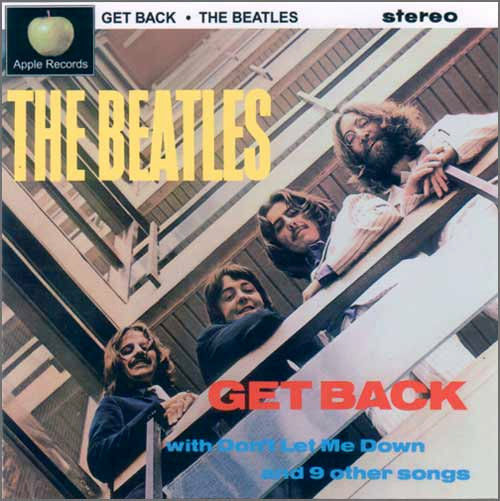 Presumably, this would’ve been much less polished than Let It Be , more like Let It Be … Naked

RunForYourLife said
And of course, probably the most well known and relevant to your OP…

Presumably, this would’ve been much less polished than Let It Be , more like Let It Be … Naked

Let It Be Naked is just as edited and ‘improved’ as Let It Be was, its a myth that its what the beatles originally intended and features them back to nature or whatever it was. The only thing different is Spectors OTT orchestral work is gone. The rejected Get Back albums are far too rough for an official release.

Please Please Me was going to be called Off The Beatles Track but was rejected (George M used that title in 1964 for an album of Beatle Orchestral works).

Again, glad to see we’re agreeing again. Only thing I wonder is what would we think of Get Back if there was no Let It Be , but we had a Get Back  film, and a whole load of outtakes. How would it seem then as an album? Back to my Get Back  vs. Let It Be  thread.

I have Off The Beatles Track on vinyl. Great album.

I think if Get Back (the album) was released as Glyn Johns had intended, as well as the film, it would be regarded MUCH worse than Let it Be is.  For all of the ghastliness Spector perpetrated on the album, it’s about as good as it can get from the source material. I still wish they’d kept Get Back as the title, though, instead of Let it Be.

I like The Beatles “with their trousers off.” Think it’s much closer to the idea, and admit it’s rougher, but prefer it over LIB . I have a thread for this. Feeling like I’ve taken this one off course.

Point me in the right direction, then!

Wasn’t Off the Beatle Track also supposed to be a live recording at the Cavern before they shifted gears?

Also, A Hard Day’s Night (both the movie and album) were originally titled Beatlemania! before Ringo’s saying came about and was used to title the song, film, and album.

The original idea for PPM was to record the album at The Cavern, until Martin realised it wouldn’t work. The live album would’ve been called Off The Beatles Track, and since that idea was replaced by the “live set in the studio” the title is often associated with PPM .

Yes, Beatlemania! was an early title. However, first mention of A Hard Day’s Night  came in one of the pieces in Lennon’s In His Own Write, can’t remember which off the top of my head. Ringo may have said it, but it already existed it Beatle circles, and from the man who wrote the song. Likeliest course of events, leaving wherever after whatever, Ringo quoted phrase from Lennon writing he’d seen in draft of In His Own Right (consciously or not), and Lennon thought, “Ooo, there’s an idea!”

As far as i know Ringo came up with the phrase ‘A Hard Days Night’ after a long day in the studio or somewhere “its been a hard day” and then added the “‘s night” seeing it was nighttime. John himself attributed the phrase to Ringo as a Ringoism.

Ringo didn’t quote it from Johns book as far as I know. It was the other way round.

I’ve heard John say once that he often used Ringoisms and used to follow Ringo around with a notebook and wrote some of them down.

^you’re both right and that’s what I’d always read, John got it from Ringo, not the other way around.

I am not disagreeing that Ringo said it in the circumstances related, I am just unsure of the chicken-egg thing. What is certain, if we take their statements, is that A Hard Day’s Night was written on 15 April 1964 and In His Own Write, largely made up of Lennon’s picks of his writings over the past couple of year (some had first appeared in Mersey Beat), was published on the 27th.