The Red and Blue Albums

Blue for me. Just preferred the songs on the Blue for me, so much difference in each one as you went thru.

They are far far superior to 1. Personally i'd suggest to people to skip 1 and get these instead. Will hook anybody if they went thru them. Obviously there are glaring omissions (I Saw Her Standing There , No Reply ) but it is impossible to put together a four disc overview of the Beatles material and please everyone. I do like how no covers were included, just originals.

I forgot the absence of "I Saw Her Standing There ." Musically and impact-wise, that song should have taken precedence over "Love Me Do " or "From Me To You " but I suppose that on some level it made sense to include their early releases.

The a-sides were always going to be included but its not as if there wasn't sufficient room to include a few more tracks, on the Red Album at least as the running time is so short and it even has less tracks than the Blue (26 to 28). Always puzzles me that With The Beatles and Beatles For Sale only got 1 representative when the quality of some of the other original compositions are so strong, even Revolver only got the songs released on a double a-side.

I Saw Her Standing There

It Won't Be Long

I Should Have Known Better

Got To Get You Into My Life

She Said, She Said

36 tracks, follows the no covers rule, and comes in with a running time under 90 mins so still less than the Blue Album and easily fits on the 2 LP's. Could easily keep adding to it but leaves a wealth of excellent material outstanding, still to be discovered.

DoctorRobert said
I have a really soft spot for the Blue Album . It was the only Beatles album my parents had, and thus the album I was raised on.

I first found out about the remasters at a bus stop advert, I almost shat myself on seeing my childhood staring back at me.

They are classic albums on their own, like mentioned, perfect for the beginner, so they might as well be the best recordings possible!  God knows I got sucked into buying them.  Thankfully much cheaper than the older jewel case sets!!

I had these on 8-Track when I was a kid. Naively, I thought I now had every Beatles song ever recorded.

Those were the days.

Second and third Beatles albums i bought, both on long play single cassettes (so pre-'93). Loved those, especially the Blue Album (which has Revolution as the first song on side 2 instead of Back In The U.S.S.R.) - the double cassettes are nowhere near as enjoyable.

Wogblog article on the two photo sessions for the proposed cover of the 'Get Back ' album which never saw the light of day until the 1973 release '1967 - 1970'. I never knew that there has been two photo sessions for it. There is even a photo from the first session that was never used which i don't remember ever seeing before. 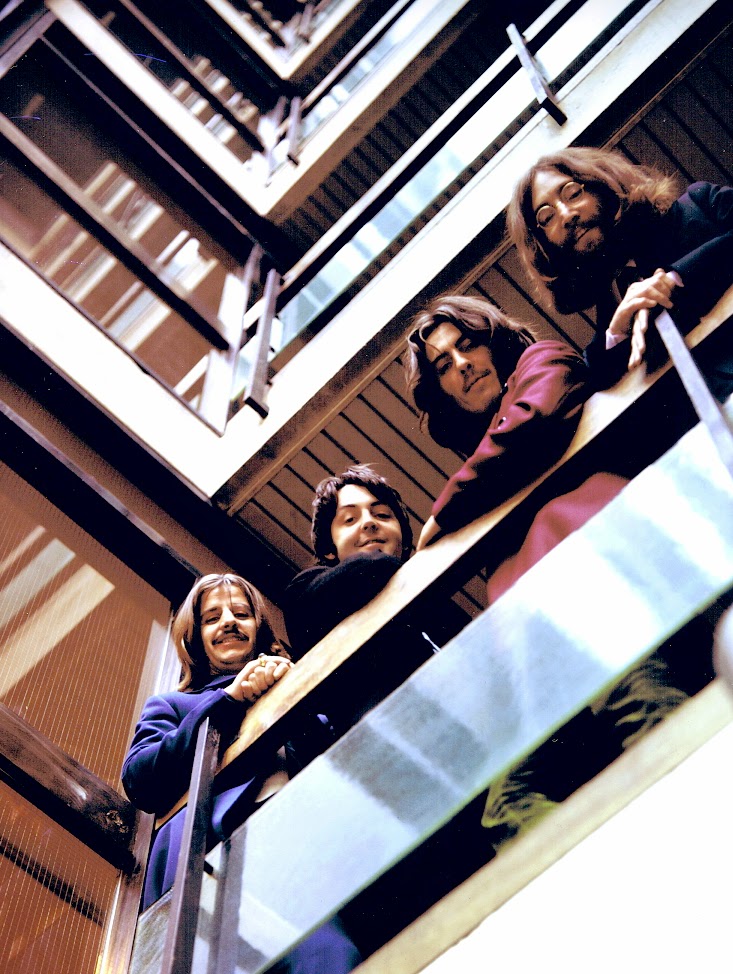 An interesting titbit on the second photo session, the one the cover of '1967 - 1970' came from, is that the suits George and John wore are from the 1966 tour. I never even realised they wore matching suits and i've looked at that picture who knows how many times. 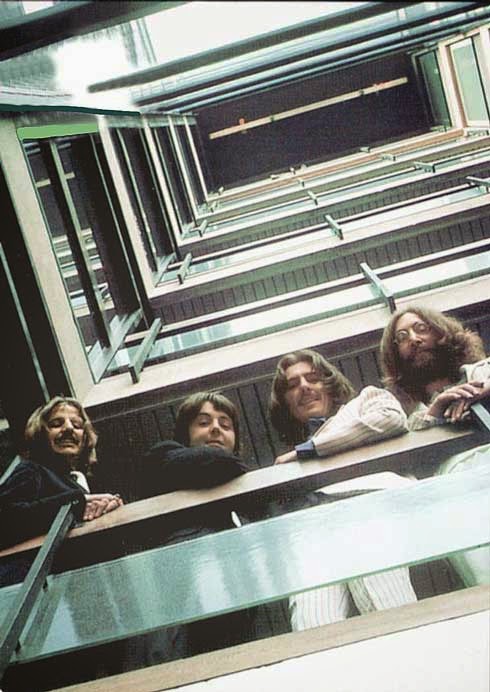 I have the fondest recollections of both The Blue Album and Rubber Soul –my uncle, who did graduate studies in London in the ’60s, lent them to me when I was fifteen and eventually gave them to me. They were the way I got to know The Beatles. After that came the first LP I bought: With The Beatles . The Red and Blue Albums are a great way to get to know the classical music of the twentieth century.

And here I thought Michael owned their songs.....

So there's a white insert that comes inside both of these albums (not sure if it's in the reissues, but it was in the original issues and Father Shears Campbell kept it with his).

So on the back it advertises other Beatles albums available for sale at the time of the album's release. On the front it gives the track-list of both the Red and Blue albums. It also gives the album that each song is from. Mine gives the Capitol album of which the song belongs (because I have the capitol pressing) and I assume the UK apple pressing gives the UK albums.

One thing I found interesting on the capitol insert is that the songs "From Me To You " and "A Hard Day's Night" make their capitol debut on the Red Album , however the insert says that they are from the album "Help !" I thought this was odd until I remembered that the US Help ! has the FMTY and AHDN instrumentals, although the songs on the Red Album are the normal songs.

Another reason why it might've assumed that From Me To You is from Help ! is because that album was originally going to be called Eight Arms To Hold YOu, a line originally taken from From Me To You although considering all of this other confusing stuff, I doubt this is the case.

I have fond memories of these compilations. I remember my Mum picking me up from primary school and she pulled out the Blue Album from a plastic bag and we went home and listened to both CD's from beginning to end.

Not long after we both went to a department store and bought the Red Album and we did the same thing. I taped the CD's to cassette's and played them on my walkmen almost non stop but the tape ran out during the end of Hey Jude on Disc 1 and The Long And Winding Road on Disc 2. It never occurred to me to tape the other songs on a different cassette. I could of put them on The Red Album because there was a lot of left over tape as those compilations are quite short.

I don't gave them anymore as I left them with my Mum and Dad when I moved out of home but they were my earliest Beatles recordings before I went and explored the studio albums.

I'm glad they have been remastered and reissued. Obviously they are missing some other great album tracks but they are good starting point. In fact if someone asked me for a starting point for The Beatles then I would suggest these compilations. I do agree that the Red Album should be just one disc as having it as a two disc set when it would easily fit on one is a rip off.

In order to fit it onto one disc per volume, you'd have to cut out some tracks, I can help with that:

6. I Want To Hold Your Hand

I didn't purchase the 2009 remasters. Think of the Red and Blue albums as the ultimate Beatles Starter Kit. 1/4 of the Beatles catalogue for right around $A40.00 at the time wasn't a bad way to go. Here's an appreciation.

iPods with cameras are not allowed in my workplace, so I finally got around to copying the official Beatles albums to my old iPod classic. These were the first albums I heard today. I think it’s possible I hadn’t heard The Beatles in a whole year? Not sure. On my iPod touch I think I probably go for the solo albums more.

My iPod ran out of batteries before the last blue CD.

You know, they forgot so many songs.

Blackbird , Rocky Raccoon , Twist And Shout (i know, it's a cover), I Saw Her Standing There , I've Just Seen A Face , oh darling, the Abbey Road medley, helter skelter, she's so heavy, Tomorrow Never Knows , Here There And Everywhere , For No One , She Said She Said , I'm Only Sleeping , and many more.

Yah like Revolution 9 . How dare they forget that one.

The Red and Blue Albums were my starting point back in the mid-70s. Of course I had to buy everything then!

Once I did buy an original album, I wish I hadn't bought the compilation albums because some of the songs were too familiar. This, in particular, spoilt 'Rubber Soul ' for me as there are 6 RS songs on the Red Album .

I didn't buy the Red or Blue albums on CD. I think they were just too expensive when they came out and I had all the songs on CD anyway. I think they would still be the best starting point for a potential Beatles fan, but on CD, they both should be single discs, to help reduce the price. I think this could be achieved by maybe removing a song from the Blue Album . A few extra songs could be added to the Red Album within a single disc.