I've noticed all the chatter about specific solo albums, so I said to myself, “self?” Self said, “yes?” and I said, “let's make a new thread!” (Ho ho ho hee hee hee ha ha ha, hopefully your sense of humour is still intact after that doozy!)

So, I was thinking this thread could be for giving good/bad reviews to some post-Beatles albums and make some recommendations.

I thought I could start off with Paul's 1971 album Ram , since it is one of my favourite solo albums. With that said, I highly recommend the album for pop lovers. Perhaps it's more of John's loathed music as opposed to loved, but I find it fantastic!
The album has everything from sweet tunes like Long Haired Lady or Another Day to hard rockers like Smile Away and Monkberry Moon Delight . There are even some epics- real McCartney showstoppers like Backseat of my Car and Uncle Albert /Admiral Halsey ! Every other track is just as great; I can't find any obvious fault in them except for a bit of triviality.

This is a great album, give it a go!

If you're looking for real depth I suggest you look elsewhere, but those seeking an easy, uplifting, toe-tapping album, this is for you!

Well, as I said in another thread, if you're looking for something good and recent, I'd highly reccommend Paul's “Elecric Arguments,” as The Fireman.

Totally agree with Alissa about Ram .

I'll just do Living In The Material World – possibly my favourite Harrison album but it has to contend with Cloud 9.

The album came out in 1973 and that's when I bought it (eeek). The fantastic opening track – Give Me Love (Give Me Peace On Earth) is followed by some great lyrical songs. The Light That Has Lighted The World has some very personal lyrics to it:

It's funny how people just won't accept change, as if nature itself – they'd prefer re-arranged
So hard to move on when you're down in a hole where there's so little chance to experience soul
I'm grateful to anyone that is happy or 'free' , for giving me hope while I'm looking to see,  the light that has lighted the world

The title track has this superb verse:

There is not one bum track, the production is crisp and there is some beautiful piano playing from Nicky Hopkins on it. George as it VERY VERY best.

For those who haven't had a lot of exposure to the solo works, I have two recommendations. 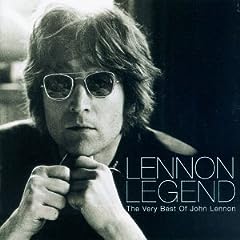 Lennon Legend is a really useful album if you're looking for an introduction to John's music.  All of the big hits are here: “Imagine “, “Instant Karma “, “Jealous Guy “, “Mind Games “, “Beautiful Boy”, “Watching The Wheels “, “#9 Dream”, “Cold Turkey “, and several more.  It was this album that made me really want to get out and find more of John's full solo albums. 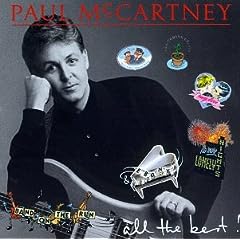 Paul's All the Best is also a “compilation” album of hit songs, although it does have the drawback of having been released in 1987, so there are no selections from Flowers In The Dirt , Flaming Pie , Chaos and Creation, Driving Rain , etc.  All the same, the classics are here: “Band On The Run “, “Another Day “, “Uncle Albert “, “Live And Let Die “, “Coming Up “, “My Love”, “Ebony And Ivory “, etc.  I cut my teeth on the US release, but I just found out recently that there was a UK version that had some different tracks which weren't on the US release (and vice versa) – such as “Mull Of Kintyre ” and “Pipes Of Peace “.

I'd give these two albums a listen if you're just looking to whet your appetite for the solo works of J&P.

I thought I’d revive this thread with another McCartney recommendation: Chaos and Creation in the Backyard.

Released in 2005, it is one of Paul’s more recent albums, and before downloading it (hee, hee!) I pondered whether or not I should as I get kind of down hearing how much their voices have aged. Against instinct, I downloaded it, and don’t regret it in the least! Superb!

His voice sounds better than ever- aged, but like fine wine, it has only improved. How the man can still hit those notes is beyond me, but, Pauly can still sing like a bird!
The tunes themselves are great- I particularly like the meaningful ‘Riding to Vanity Fair’,  the whimsical ‘English Tea’ and the poignant ‘Anyway.’ He even seems to delve into his Beatleesque roots with ‘Promise to You Girl’! All the tracks got 5-star ratings from me, they were great.

I suppose the only downside (or upside, depending on who the listener is) is that the majority of tunes are slow and mellow. As each track began, I found myself hoping, “be fast, be fast!” but over and over came the relaxed, downbeat songs. Not bad- just listening to it past midnight was quite a challenge- I found myself dozing off a bit!

I really recommend the album to any McCartney, or Beatles for that matter, fans, it’s great, not particularly Beatle-y, but those who like McCartney solo work should love having this in their collection! I was thinking this thread could be for giving good/bad reviews to some post-Beatles albums and make some recommendations.

My favorite is All Things Must Pass (on the original US Apple records vinyl, which you can still find.) I spent countless hours listening to this post-Beatle release over either McCartney or Plastic Ono Band in 1970. IMO it’s George at his solo best (at least until Traveling Wilburys.) One can almost overdose on Paul and John’s prolific solo works. But this album was the biggest critical surprise and success of all early post-Beatles, and it out sold all the others. Great songs with tremendous atmosphere that probably should have made it onto Beatle albums (What Is Life , Wah Wah , Isn’t It A Pity , etc) combined with an amazing mix of great musicians who contributed to the songs (Ringo Starr , Billy Preston, Badfinger, Eric Clapton, Derek and the Dominos, drummer Alan White, and even a brief appearence by a young Phil Collins playing bongos.)

Harrison later regretted using Phil Spector as coproducer (“too much echo,” George said), but a must have solo album if you ask me, even over other post-Beatle works.

= McCartney (or bowl of Cherries as I’ve heard it called). If you just get some crappy greatest hits collection you miss all the cool instrumentals off this album and you miss the song “That Would Be Something “…CLASSIC!

= All Things Must Pass . The best solo work of all the Beatles! Greatest collections will rob you of great songs like “I’d Have You Anytime “, “The Art Of Dying ” and “Hear Me Lord “! Plus the album ends with a bunch of cool jams featuring artists like Clapton, Preston and Baker!

Oh that magic feeling…nowhere to go! McCartney: RAM is his finest solo work for sure. Thrillington  is worth owning if you like RAM. If you count Wings as solo work (I don’t) then don’t bother picking up just one, do yourself a favor and get every album Wings ever recorded! If you like it current than pick up Electric Arguments from his Firemen project.

Lennon: Plastic Ono Band is his best. Pick up Yoko Ono/Plastic Ono Band as well, they are companion pieces and the guitar work on her’s is fiery! If you like John’s weird side then grab Sometime in NYC (Lennon/Ono). It’s gaggingly political but very odd and hilarious. “Woman is the N—r of the World” is a Lennon classic!

Harrison: Obviously, you gotta get All Things Must Pass . For it’s Beatles legendary status and for a good dose of spirituality. 33 1/3 is also a great record.

Starky: I liked his self-titled third album. It’s got a few Harrison and Lennon pinned songs on there and all of the other three Fabs make an appearance.

All of their solo work sounded nothing like The Beatles in my opinion. So find out what you like, which one’s you think have a good sound. And, if you dig it, search for all of it. It’s all quality music!