Why was the record named Revolver? (includes discussion on cover art)

Why the name of 1966 Beatles album is revolver?

While none of its songs have this name ?

I’m sure a lot of the people can answer this question better than I do, but anyway, here is what I remember to be said about it:

The record obviously revolves, or goes round, when it’s put to the player. So the title doesn’t really refer to a gun. I don’t think there is anything deeper behind the title, they just made it up.

But I think it should be taken into account that the Beatles never really named their albums based on the “leading single” like a lot of the bands do ( possibly because most of the time the singles weren’t even included on the albums), except for their first album, which was for marketing purposes (the name), anyway. Magical Mystery Tour album does have a song bearing the same name but the song was conceived of after coming up with the name of the album( and film). Rubber Sould doesn’t have a title song, neither does The Beatles (White Album ) or Abbey Road .

They thought up a whole load of names like Beatles on Safari, Abracadabra and AfterGeography (a Ringo pun on the Rolling Stones album Aftermath) but nothing was suitable. Then, i think it was in Japan, the foursome came up with Revolver for the reasons Minime said.

I never knew that – thanks for sharing minime!

meanmistermustard said, “Then, i think it was in Japan, the foursome came up with Revolver “

Revolver came out very shortly after the Beatles arrived in Japan (along with which super famous male movie star [still today]?).

If meanmistermustard is correct, then with just a few weeks to go before the release date, the band still had no title and no cover art.

Into the Sky – I hate to do this, but I must correct you. Voorman did the artwork before the title, I believe. At least their portraits

No problem – i can readily believe that. It certainly would have been easy to add the title at the bottom at the last moment.

However, the Beatles were performing songs from Revolver in the summer of ’66, so you’d think the album art and title would have been finalized by then – but maybe not.

Taken from wiki regarding the album cover

The title was chosen while the band were on tour in Japan in June–July 1966. Due to security measures, they spent much of their time in their Tokyo Hilton hotel room; the name Revolver was selected as all four collaborated on a large psychedelic painting. 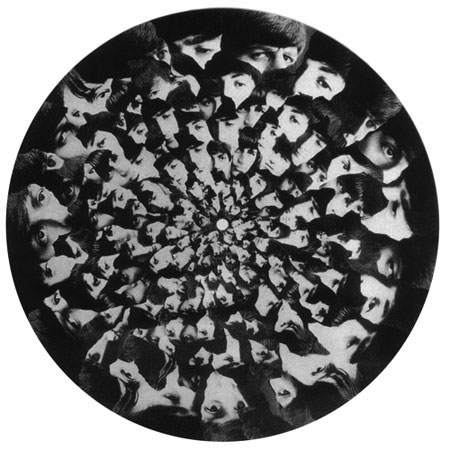 On another note that mentioned psychedlic picture is quite something. Ive seen it once before in a book but if anyone knows where to find it online it would be fabulous to see it again.

They settled on the title Revolver in Munich three days after finishing the recording. However, earlier in the year Robert Freeman came up with a cover concept featuring a collage of their faces (that one in the previous post). The idea was that it would spin and merge their faces when put on a turntable – presumably there would have been a hole in the middle. Maybe they remembered this when they chose Revolver .

AFAIK The Beatles didn’t really care for Freeman’s design so asked Klaus Voormann to design alternative artwork – this was while sessions were still going on, as KV visited some of them to get a feel for the music. So, Freeman, then Voormann, then Revolver .

There’s a very neat (but brief) interview with Klaus Voormann on how the REVOLVER album cover came about.

IMDeWalrus, yes, quite good, thanks.

I´m in complete awe after listening to this album. Just feel like lying here now and trying to comprehend how a band, four people, can make such greatness.

I think it´s my favourite, for now at least.

Not to sound creepy, but I’m glad that they chose the name Revolver for the album. After hearing some of the other ideas (like Beatles on Safari), I feel that the name Revolver fits. In an interview that you could here part of if you put a 2009 remastered Revolver album into your computer, Paul said they got the name because they thought of what records do, and records revolve.

I thought at first that it was a reference to the gun so I was glad when I heard that actually, it’s got nothing to do with guns and violence etc. So for that reason alone, I love the title.

I thought at first that it was a reference to the gun so I was glad when I heard that actually, it’s got nothing to do with guns and violence etc. So for that reason alone, I love the title.

Same here! I think its cool word to say, “Rrreevvvoooolllllvvverrrrrr,” but it seemed it weird title for that album. I only found out it was a pun when I read Many Years From Now (or possibly the Huner Davies biog, can’t remeber which one) . And now it seems blindingly obvious that they meant a revolving record!

I’m really glad they didn’t call it Beatles On Safari, it wouldn’t have done them any favours to rid them of their mop-top image. After Geography would’ve been funny though.

Another One said
Why the name of 1966 Beatles album is revolver?

While none of its songs have this name ?

What does a record do?

It could also mean that their music was ‘revolving’ in a new direction!

Inner Light said
It could also mean that their music was ‘revolving’ in a new direction!

I don´t think they thought of it like that but it´s an interesting take on it!

Got listening to this last night and somehow my ipod got onto random mode so ended up back at the start so i had to turn off random and play it thru. Whilst listening to ‘Love You To ‘ the thought occurred to me of young Beatle fans brought up on ‘She Loves You ‘ and ‘Yesterday ‘ listening to the all out Indian intro for the first time and wondering what on earth was going on, it must have been a huge WTF moment.

With ‘Pepper’ the sounds had very much been there if you had been been keeping tabs on the Beatles progress and advance in music thru ‘Revolver ‘ and ‘Strawberry Fields’ of new sounds and experiments on the records but before Revolver there wasn’t that much in regards to major differences with instruments and effects; ‘Norwegian Wood ‘ had a bit of sitar through it but wasn’t in your face, ‘Rain ‘ had some backwards effects but was mainly noticeable at the end. ‘Revolver ‘ on the other hand would have been off the wall for some and their reactions to hearing such variations in the tracks would have been priceless to witness (we got a taste with the audience reactions to ‘SFF’ and ‘PL’ on ‘American Bandstand‘ however a lot of the comments were on the new Beatles looks). Little surprise therefore that it wasn’t until ‘Pepper’ that most of the Western world had caught up and finally got it.

At times i miss that experience of listening to a new song and being overwhelmed that what i am hearing is a completely new experience.

I miss that experience too.

Listening to Revolver for the first time blew me away. Although it was relatively recent, the sounds were still fresh because no one has been able to execute the innovation quite like the Beatles since. The solo played backwards and reversed to be forward and sound backwards in I’m Only Sleeping was genius, TNK was revolutionary. Hearing the first few notes of Love You To was interesting enough, but when the whole Indian band came in with the strong percussion, it was amazing.

Revolver was probably the biggest overt leap in the Beatles music. An amazing album!