I got my copy of Live At The BBC - The Collection today (volumes one and two in a slipcase). Some thoughts on the 1994/2013 reissue of volume one:

The improved sound quality of the remastering is largely negligible. The one that sounds most different to me is Johnny B Goode, which actually has more hiss on the 2013 version (it's also a bit brighter and probably better than the original, slightly muffled version).

On the 1994 version, some of the songs and speeches were crossfaded. They've changed this now so there's no overlap. I prefer the new cleaner versions.

There's a new 30-second bit of speech on disc 1 called What Is It, George?, in which he introduces Soldier Of Love. On disc 2 there's another called Ringo? Yep, ahead of I Wanna Be Your Man . It's a short interview with Ringo, in which he answers "Yep" to a series of questions. It replaces Have A Banana.

Disc 2. Things We Said Today doesn't have the speech over the intro. Presumably they found the original session tape (my guess is the 1994 release was taped off the radio in 1964).

She's A Woman now lasts a few seconds longer. I Forgot To Remember To Forget is faster and slightly higher, and sounds better. There's now a closing version of From Us To You at the very end of the album. The 1994 version ended with Love Me Do .

IMO none of these are really reasons to repurchase the album (I did because I tend to buy anything Beatles, but you've probably got more sense than me). If you have the 1994 version you've already got a perfectly good copy, unless those crossfades really bug you.

The intro-less Things We Said Today has been booted and i think the version with the intro was for oversees and was preserved on one of those Oversees Transcription (or whatever it is) discs.

I'd like to know why Have A Banana was replaced, was it just to get those who need everything to buy it (which wouldn't make sense as they would buy it anyway),

Thanks. I didn't know that.

Thanks for the write-up Joe. I don't think I will bother with the 2013 remaster...at least not today.

I'd like to know why Have A Banana was replaced, was it just to get those who need everything to buy it (which wouldn't make sense as they would buy it anyway),

I suspect it's because Have A Banana had the guitar outro of AHDN in the background, and the 2013 reissue contains clean versions (no crossfades). Presumably there was no way to separate them, so they found some alternative audio instead.

meanmistermustard said
I'd like to know why Have A Banana was replaced, was it just to get those who need everything to buy it (which wouldn't make sense as they would buy it anyway),

I suspect it's because Have A Banana had the guitar outro of AHDN in the background, and the 2013 reissue contains clean versions (no crossfades). Presumably there was no way to separate them, so they found some alternative audio instead.

Good theory Joe, would explain it. So does that mean that AHDN ends clean and full, not sudden? The "Ringo? Yup!" speech is the actual intro to that I Wanna Be Your Man performance so it does make more sense than a non-related piece of dialogue (again to that performance of IWBYM, not to AHDN which wasn't even the original outro to that either).

I just checked again. AHDN does end with some banter. It's actually most of "Have a banana!", but ends slightly earlier - specifically just before this point:

So instead of two separate files/tracks, they've rolled them into one and removed the final seconds. AHDN ends with "otherwise there's no point in you being there, is there?" I was wrong about there being no music/speech crossover, apologies.

Thanks for all the info folks, I will also stick with the one I have.

I consider the new edition as one of those things that I'll probably find in a thrift store in a few years, and will pick up then.  The old edition (as much as I listen to it) will suffice for a long time.

I haven't finished listening yet, but after disc 1 I have noticed that the remaster generally has a warmer sound, while still being clear and defined.  The old one sounds sharper but is not as easy on the ears.

That's how my ears hear it, at least.

That's interesting. I ripped my copies and played the first few seconds of a 1994 song, followed by a few of the 2013 remaster, and found barely any difference. I went through the whole album like that, though admittedly didn't listen to the songs all the way through. The audio improvement certainly wasn't on a par with the 1980s/2009 remasters.

There are also differences between the booklets with different pictures, a new essay by Kevin Howlett replacing 1994's, and slight variations in some of the song details; for instance on the opening track, 'Beatles Greetings', the recording date has been amended to the correct date of the 3rd October (originally stated as the 9th October and that sentence removed) and the note for 'I Feel Fine ' now refers to the outtake on 'On Air Volume 2'.

As for the end of A Hard Days Night why didn't they use the alternate piece of dialogue that ends probably (and is on bootleg) instead of an early crass fade?

One additional difference is that 'Crying, Waiting, Hoping' was edited on the '94 release but not on the 2013 edition.

The below was posted over on Bootlegzone by Lord Reith, doesn't go into the differences but does show where the tracks were sourced from. Interesting to see which tracks Apple edited pre-release, i knew about 'Keep Your Hands off My Baby', not the others.

The tracks highlighted in red are instances where I think they used bootlegs and did not necessarily utilise the best source available (just take a listen to I Got To Find My Baby) Tracks in blue are from master tapes or transcription discs. Tracks in green were taped by Margaret Ashworth. Tracks in purple came from Bernie Andrews who likely recorded them off the studio feed during transmission. The rest I don't know.

LIVE AT THE BBC
CD 01
Beatle Greetings (dialogue)
From Us To You*
Riding On A Bus (dialogue)
I Got A Woman *
Too Much Monkey Business*
Keep Your Hands off My Baby* HEAVILY EDITED
I'll Be On My Way*
Young Blood*
Shot Of Rhythm And Blues*
Sure To Fall (In Love With You)*
Some Other Guy*
Thank You Girl
Sha la la la La! (dialogue)
Baby It's You
That's All Right (Mama)*
Carol*
Soldier Of Love (Lay Down Your Arms)*
Little Rhyme (dialogue)
Clarabella*
I'm Gonna Sit Right Down And Cry (Over You)*
Crying, Waiting, Hoping* EDITED ON '94 RELEASE/LIMITED ON '13 RELEASE
Dear Whack! (dialogue)
You Really Got A Hold On Me EDITED
To Know Her Is To Love Her*
A Taste Of Honey
Long Tall Sally EDITED
I Saw Her Standing There
Honeymoon Song*
Johnny B. Goode*
Memphis*
Lucille *
Can't Buy Me Love
From Fluff To You (dialogue)
Till There Was You

CD 02
Crinsk Dee Night (dialogue)
A Hard Day's Night
Have A Banana! (dialogue)
I Wanna Be Your Man
Just A Rumor (dialogue)
Roll Over Beethoven
All My Loving
Things We Said Today
She's A Woman
Sweet Little Sixteen*
1822! (dialogue)
Lonesome Tears in My Eyes *
Nothin' Shakin' (But the Leaves On the Trees)*
Hippy Hippy Shake*
Glad All Over *
I Just Don't Understand*
So How Come (No One Loves Me)*
I Feel Fine
I'm A Loser
Everybody's Trying To Be My Baby
Rock And Roll Music
Ticket To Ride
Dizzy Miss Lizzy
Medley: Kansas City /Hey! Hey! Hey! Hey!
Set Fire To That Lot! (dialogue)
Matchbox
I Forgot To Remember To Forget*
Love These Goon Shows! (dialogue)
I Got To Find My Baby*
Ooh! My Soul* EDITED (mmm's note: Lord Reith posted the following elsewhere on this track: "0' 57" to 1' 05" has been replaced with that from 0' 12" to 0' 18" and then a brief snippet from 0' 33" to 0' 35")
Ooh! My Arms (dialogue)
Don't Ever Change*
Slow Down
Honey Don't (vocal by John Lennon )
Love Me Do

CD 01
And Here We Are Again (Speech)
Words Of Love
How About It, Gorgeous? (Speech)
Do You Want To Know A Secret
Lucille
Hey, Paul… (Speech)
ANNA (GO TO HIM)
Hello! (Speech)
Please Please Me
MISERY
I’M TALKING ABOUT YOU
A Real Treat (Speech)
BOYS
Absolutely Fab (Speech)
CHAINS
ASK ME WHY
Till There Was You
LEND ME YOUR COMB
Lower 5E (Speech)
THE HIPPY HIPPY SHAKE
Roll Over Beethoven
THERE’S A PLACE
Bumper Bundle (Speech)
P.S. I LOVE YOU
BEAUTIFUL DREAMER
Devil In Her Heart
The 49 Weeks (Speech)
SURE TO FALL (IN LOVE WITH YOU)
Never Mind, Eh? (Speech)
Twist And Shout
Bye, Bye (speech)
John – Pop Profile (Speech)
George – Pop Profile (Speech)

CD 02
I Saw Her Standing There
Glad All Over
Lift Lid Again (Speech)
I’LL GET YOU
SHE LOVES YOU
MEMPHIS, TENNESSEE EDITED
HAPPY BIRTHDAY DEAR SATURDAY CLUB
Now Hush, Hush (Speech)
From Me To You
MONEY (THAT’S WHAT I WANT)
I Want To Hold Your Hand
Brian Bathtubes (Speech)
This Boy
If I Wasn’t In America (Speech)
I GOT A WOMAN
Long Tall Sally
If I Fell
A Hard Job Writing Them (Speech)
And I Love Her
Oh, Can’t We? Yes We Can (Speech)
YOU CAN’T DO THAT
HONEY DON’T
I’LL FOLLOW THE SUN
Green With Black Shutters (Speech)
Kansas City /HEY-HEY-HEY-HEY!
That’s What We’re Here For (Speech)
I FEEL FINE (STUDIO OUTTAKE)
Paul – Pop Profile (Speech)
Ringo – Pop Profile (Speech) 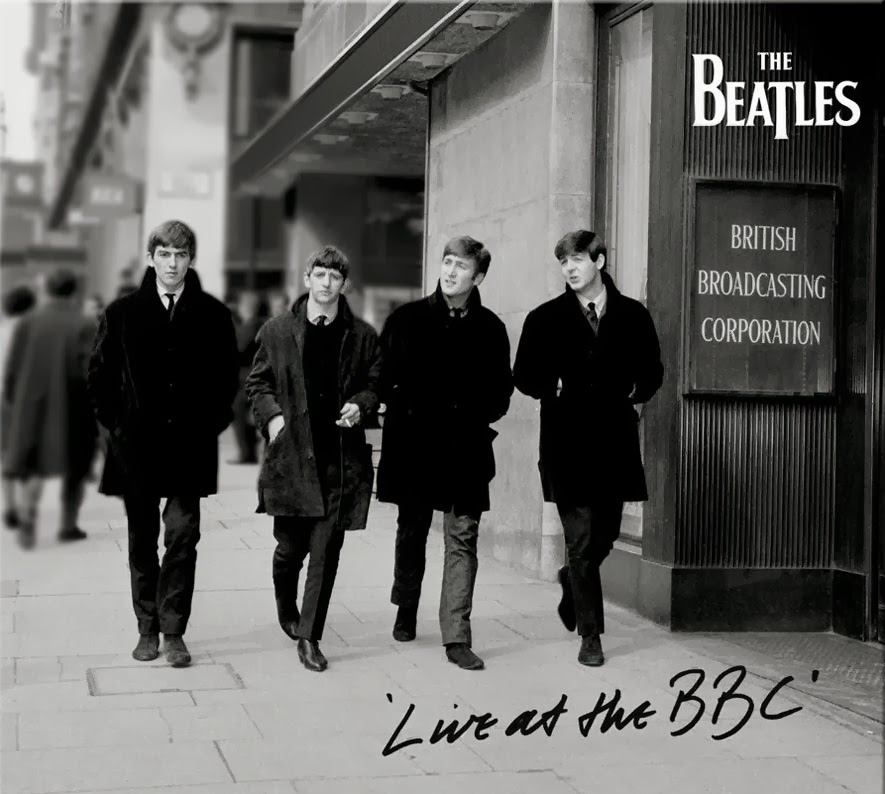 Am I the only one who thinks the picture looks like it's been altered somewhere down the line?

Am I the only one who thinks the picture looks like it's been altered somewhere down the line?

Is the original picture in sepia or in black and white? I think the black and white one looks brighter and sharpened. The sepia thing looks a bit forced to me.

Hi folks, and sorry to bother you all.

Is there a definitive list of which specific tracks differ between 1994 / 2013 releases, and maybe even how? I am trying to avoid duplication on my iTunes library but want to collect all possible variations.