I think that Meet The Beatles! is a worthy addition to a collection, simply for the historical significance. It’s fun to pretend you’re an unsuspecting American kid in early 1964 and get blown away by that intro to “I Want To Hold Your Hand “.

I’m also partial to Yesterday … And Today because it’s essentially a compilation of songs I enjoy (Plus, the stereo “Day Tripper ” on there has a cool intro). And of course, who could forget the charming, original cover? 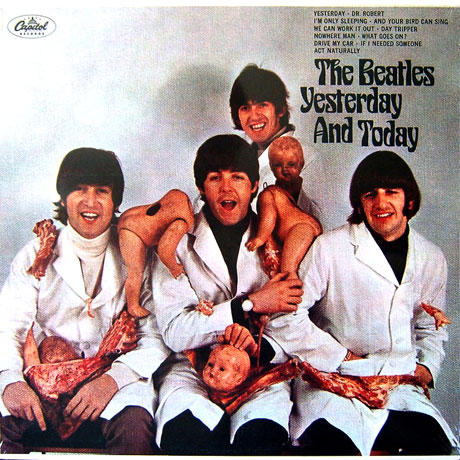 Of course, save for Magical Mystery Tour , the British albums are the true canon, and how the band intended them to be heard.

I like the American A Hard Day’s Night because I like all the pictures on the back that they don’t have on the UK record, and I like the instrumental This Boy and And I Love Her .

My favourite american LP was Beatles VI. I bought the record in a second hand shop in Glasgow for what seemed like a small fortune (would only have been about £16 but to a young kid thats a lot of money) and would play it over and over. Something about the track order and the album cover, blew me away.

And it was different to the UK albums i was used to. There is something incredibly special almost magical about finding a foreign Beatle release which has totally new artwork and track layout, especially when young, owning it and playing it on a record player.

Something New has a number of alternate mixes which makes it pretty cool from that aspect but in truth its a weaker Capitol album, Komm, Gib Mir Deine Hand really ruins the whole thing, give me AHDN any day.

I’m really sorry to say this, but I would say none. I realise that for many of our American friends that they have an affection for these albums because they were how they first got to hear The Beatles. I have Capitol Vols. 1 & 2, and they are interesting as the oddities they are. Some interesting alternate/earlier mixes from the official catalogue. But give me a choice between UK and US releases, and I will go for the UK releases every time. A good compilation of the alternate US mixes would be a welcome addition to the catalogue, especially since they got some songs from 65-66 before they were actually finished. But I view the US releases as little different than any other overseas releases. The only time they got it really right as opposed to EMI would be MMT. There are some fascinating 60s variations worldwide, and a good 12×12 book collecting up the artwork would be interesting, but as to the vinyl, UK each and every time.

The American versions of Rubber Soul and Revolver are pointless to own if you have the British versions. Yesterday and Today is very rare, so I would think it’s worthy. The instrumentals on the American Help ! album make it worthy to own, and Meet the Beatles would also be worthy.

Rubber Soul has the false start to Im Looking Thru You and is a good folky kind of album, a different feel to the UK helped by the addition of Ive Just Seen A Face and Its Only Love. Revolver is entirely pointless. If that is released on Capitol Albums Vol 3 then youre being completely ripped off.

Some of the alternate mixes on American albums are also interesting. The extreme stereo on some of the songs is cool if you want to “pick apart” songs and hear what each person is playing.

I’d say that they’re all worth getting for historical value, alternate mixes, stereo differences and song selection.  If you pick up the two Capitol Albums collections, you’ve already got mono and stereo versions of 8 of the albums.  All you need is Revolver and the UA A Hard Day’s Night , both of which were never “officially” released on CD.

About those alternate mixes, namely the duophonic ones, read this here:

Commenters were all correct; that shit sounded awful! I can’t deny that some of the albums are interesting objects to own for various minor reasons, but only as unnecessary additions to the British catalog; they sure aren’t replacements.

Remember when that first Capitol albums box was released? I recall reading some magazine review on it, and the silly reviewer was trying to defend its existence by mentioning its nostalgic appeal to Americans like him who bought the albums originally and how the Parlophone track sequences didn’t sound “right”. And he gave as an example Beatles For Sale , how the opening one-two of “No Reply “/”I’m A Loser ” didn’t sound natural to someone who was accustomed to Beatles ’65, which began with “I’m A Loser ” and then went into “No Reply “. Except that he was totally WRONG: Beatles ’65 starts off with NR/IaL/Baby’s In Black , just like on BFS! So much for his “memories”.

I would suggest to a collector to purchase the American albums. For the non collector of LP’s to get Meet The Beatles!, The Beatles Second Album and Something New.

And if you saw my love, I'll love her to.

I was born in early 1980 so I always listened to my parents records as a kid, but once I got my own copies of the CDs in 1989, it was always the British albums…that’s what I grew up with. So I have no interest in the weird American albums…they aren’t even the “real” albums as The Beatles intended them, in my opinion

The American albums are the ones I have and the ones I am used to hearing. I agree with most who say Capitol really did butcher the albums. I always listen to the British Hard Day’s Night and skip the musical interludes in Help !.

Something New is definitely interesting… I haven’t acquired it yet but some of the songs on there from A Hard Day’s Night are double tracked and it sounds quite different. It also seems like it was sloppily put together. On If I Fell  you can clearly hear Paul’s voice breaking when he sings “and I couldn’t stand the pain…”

I’d have to disagree with meanmistermustard and say I can’t stand Beatles VI! In my opinion the only songs I can appreciate on it are Eight Days A Week and Kansas City . I think it’s the worst Beatles album, and I make fun of it quite a bit all in good fun, of course. Beatles ’65 is a bit nasty as well. Then again it has No Reply , I’m A Loser , She’s A Woman , and I Fell Fine on it… But everything else is pretty icky. And Mr Moonlight is in the mix there!

Yesterday and Today, while it definitely possesses a lot of my favorite songs, just doesn’t do it for me. It’s a bizarre combination of tracks. I know some people may say it’s a good bridge between Rubber Soul and Revolver , I really don’t think so. Having Act Naturally and I’m Only Sleeping on the same album is really odd. Both Rubber Soul and Revolver have unique and very different sounds, but they sound good on their own and not together!

I think the capitol Rubber Soul is the only one a really good job was done on. It still keeps all the core song and has a nice folk rock feel.

I ended up acquiring the alternate mixes and set up the playlist if i want to listen to it, which doesnt happen often at all. I thought about getting the Capitol Boxes but decided it wasnt worth the cost. Tho that doesnt work if you want the artwork or the thrill of owning an official hard copy to play.

I can see the downside of Beatles VI and admittedly i havent played that running order for a long time, i just loved the thrill of owning the LP and playing the music, probably because i paid a fortune for it, well a fortune to a 14 year old back in 1995 – £18! The American LPs i played most were Beatles VI and Hey Jude , Something New on cassette was the other, I also remember getting The Beatles Story, such a disappointment, played it once.

DrBeatle said
I was born in early 1980 so I always listened to my parents records as a kid, but once I got my own copies of the CDs in 1989, it was always the British albums…that’s what I grew up with. So I have no interest in the weird American albums…they aren’t even the “real” albums as The Beatles intended them, in my opinion

Thats how I feel.

I bought an American copy of A Hard Day’s Night . Its interesting, but not really worthy.

The American Rubber Soul is by no means stronger than the British original, but as a dramatic break from the “early Beatles” it’s even more effective.

A Beatle album opening with “I’ve Just Seen A Face “?

That was a major WOW; and the whole album is laid back.

But these days with iTunes and playlists, there’s no reason to buy the album except for sentimental reasons.

You can create your very own “American Rubber Soul .”

You guys jostled a very pleasant memory: I was 12-13 years old when Rubber Soul was released. We were all coming back from a ski trip up in Vermont. Someone had a portable record player that ran on batteries. We listened to the whole (American) album with everyone on the bus singing along. Had never done that before, and never have since.

Would love to experience that again….

I grew up listening to Yesterday and Today and the American Help ! I don’t miss any of it now that I’ve heard the “official” catalog as it was placed on the USB drive that came out a couple of years ago, except for the James Bondian intro on Help !, but that’s a minor thing.

I grew up in the UK with the Help ! tracklistings as follows

2. You’ve Got To Hide Your Love Away

3. You’re Going To Lose That Girl

Loved that tape and its still a bit weird not playing the album in that order. Strangely I bought it in Glasgow in the early 90’s in a proper new record shop (i think HMV) after the remasted cassettes had been out for a couple of years. I need to recreate that in a playlist. The manufacturer of that tape probably screwed with the track listings in order to keep both sides as close in playing time as possible, in order to minimize the amount of tape required and keep costs low. Not nearly as bad as what the 8-track cartridge manufacturers had to do, mind you.